Sea anemones are supposed to sit on the bottom of the ocean, using their basal disc (or adhesive foot) to rest on a coral reef or sand. So, imagine the surprise of geologists in Antarctica when they discovered a mass of sea anemones hanging upside from the underside of the Ross Ice Shelf like a village of wispy ghosts. The researchers weren’t even there to discover new life, but to learn about south pole currents through the Antarctic Geological Drilling (ANDRILL) Program via a remotely-operated undersea robot.

“When we looked up at the bottom of the ice shelf, there they were,” says Frank Rack, executive director of ANDRILL, who calls the discovery “total serendipity.” The scientists have named the new upside down anemones Edwardsiella andrillae after the program. Named after the flower, anemones are actually predatory marine animals distantly related to corals and jellyfish.

In 2010, scientist deployed a robot known as the Submersible Capable of under-Ice Navigation and Imaging (SCINI) into the waters beneath the Ross Ice Shelf, the largest off the continent. The robot employed a hot water drill to melt a 850-foot hole through the ice shelf before being dropped into open water. But instead of surveying barren waters, the camera on the robot reveled “an unexpected and astonishing glimpse into this subsurface world, discovering an unusual and likely unique marine biological community dominated by anemones living inside burrows in the lower surface of the ice shelf,” write the scientists in a new paper in PLOS ONE describing the species. In fact, the camera recorded tens-of-thousands of these never-before witnessed ice anemones.

Although the anemones shrunk back from the infiltrating robot, the researchers were able to collect a few specimens by stunning the anemones with a hot water cannon on the robot and transferring them to McMurdo Station.

In addition, this is the is the first time scientists have ever discovered anemones in the Edwardsiella genus (also known as burrowing anemones) near the continent. The bone-white, ghostly anemones are a few inches long when fully extended and sport 20 to 24 tentacles.

Although scientists made the discovery in 2010, the new species has raised more questions than answers. For example, scientists have no idea how these anemones have managed to burrow themselves in the ice. Strategies used by other anemones would not work here, according to the paper. In addition, they don’t know how the species reproduce, but the underside of the ice shelf was covered in anemones, so they are obviously prolific. Finally, researchers aren’t even sure what the anemones eat.

But unexpected anemones were not the only discovery made the by the ANDRILL program. The unmanned robot filmed a whole bizarre menagerie of creatures below the ice shelf including fish swimming upside down (also treating the underside of the ice shelf as the sea floor) and an unidentified cylinder-shaped creature that scientists dubbed “the eggroll.” In addition they recorded marine worms and amphipods.

“People were literally jumping up and down with excitement,” Rack said. “They had found a whole new ecosystem that no one had ever seen before. What started out as an engineering test of the remotely operated vehicle during its first deployment through a thick ice shelf turned into a significant and exciting biological discovery.”

Scientists hope to return in 2015 to further study the anemones and other mysterious creatures somehow surviving on the ice shelf. 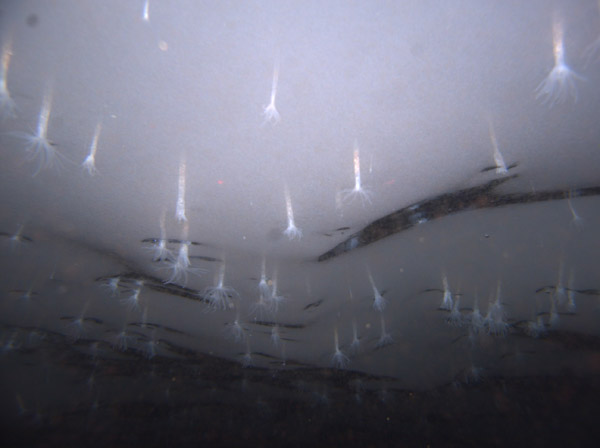 A vast community of ice anemones (Edwardsiella andrillae) living on the underside of the Ross Ice Shelf. Photo courtesy of Frank Rack. 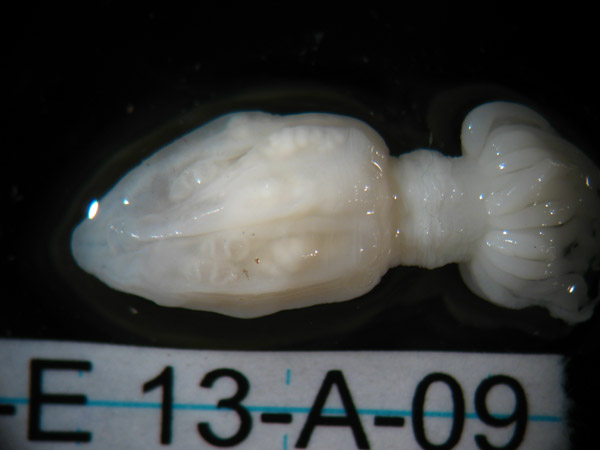 Close up of Edwardsiella andrillae. Photo courtesy of Frank Rack.

(01/19/2014) Scientists have described a previously unknown species of toad in the Peruvian Andes.

(01/07/2014) Scientists working in Africa have uncovered a new crocodile species hiding in plain site, according to a paper published in the Proceedings of the Royal Society B. Looking at the molecular data of the slender-snouted crocodile, the researchers discovered two distinct species: one in West Africa and another in Central Africa. Although mostly lumped together as one species (Mecistops cataphractus) for over a hundred and fifty years, the scientists found that the two species have actually been split for at least seven million years, well before the evolution of hominins.

(12/09/2013) In Brazil’s Baturite Mountains, scientists have uncovered a new species of prehensile-tailed porcupine, according to a new paper in Revista Nordestina de Biologia. Dubbed, the Baturite porcupine (Coendou baturitensis), the new species was discovered when scientists noticed significant differences between it and its closest relative, the Brazilian porcupine (Coendou prehensilis). The name prehensile-tailed refers to these porcupines long, mobile tail which they use as a fifth limb to adroitly climb trees.