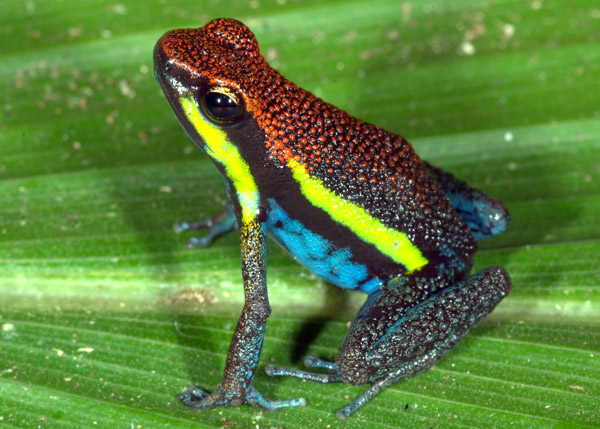 It’s official: Manu National Park in Peru has the highest diversity of reptiles and amphibians in the world.

Surveys of the park, which extends from high Andean cloud forests down into the tropical rainforest of the Western Amazon, and its buffer zone turned up 155 amphibian and 132 reptile species, 16 more than the 271 species documented in Ecuador’s Yasuní National Park in 2010.

The research, published in the journal Biota Neotropica, was conducted by Alessandro Catenazzi of the Southern Illinois University Carbondale, Edgar Lehr of Illinois Wesleyan University, and Rudolf von May of the Museum of Vertebrate Zoology at University of California, Berkeley.

“The number of species recorded in Manu is noteworthy if we consider that the national park represents only 0.01% of the planet’s land area, but houses 2.2% of all amphibians and 1.5% of all reptiles known worldwide,” said the researchers in a statement. “Amphibians such as frogs, toads, salamanders, and caecilians, and reptiles such as snakes, lizards, turtles, and caimans thrive there.” 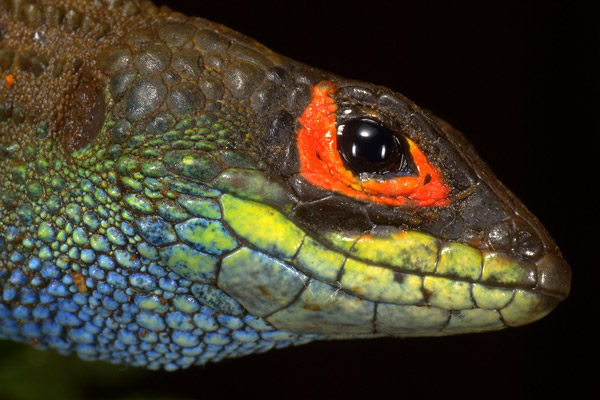 An undescribed species of Potamites stream lizard. These aquatic lizards forage in streams in the cloud forest from 900 to 2000 m. Their ability to operate at low temperatures in high-elevation streams (i.e., around 2000 m) is very unusual among lizards. Photo by Alessandro Catenazzi. 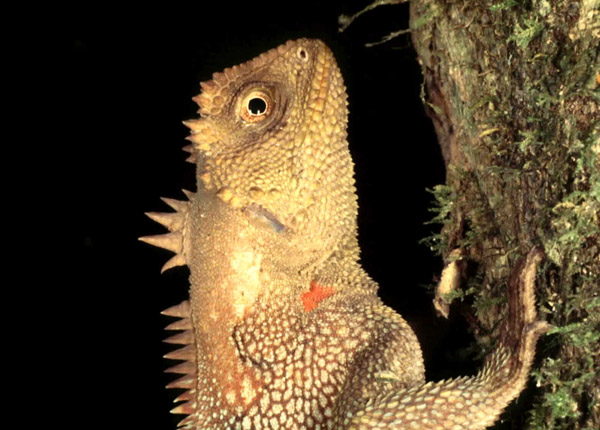 Manu and its buffer zone also support rainforest tribes living in voluntary isolation, like the nomadic Mashco-Piro, as well as other indigenous groups, like the Matsiguenka, Harakmbut, and Yine.

But the inventory of Manu’s biological wealth is still far from complete, according to the researchers who expect new discoveries in coming years due to “increased use of DNA analysis, study of frog calls, and other techniques.” For example, the world’s 7000th known amphibian was recent discovered in the park, while one of the unusual Potamites stream lizards found during a recent survey is new to science.

Manu’s importance is widely recognized, but the study adds further emphasis, noting that it houses several endangered species, including one critically endangered and three endangered frogs. The researchers note that herps in highland and mid elevation areas — even within the protected boundaries of Manu — are particularly vulnerable due the emergence of a deadly fungal disease known as chytridiomycosis.

“The collapse of amphibian species richness and abundance has been more pronounced at mid-elevations (1200-2000 m) and for stream-breeding species,” they write. “These declines occurred over less than a decade and coincided with the arrival of the pathogenic fungus Batrachochytrium dendrobatidis (Bd).”

“The sudden disappearance of a sizable proportion of the montane anuran fauna despite the excellent state of conservation of the forest and protection granted by Manu NP shows that additional conservation actions are needed to preserve amphibian biodiversity.” 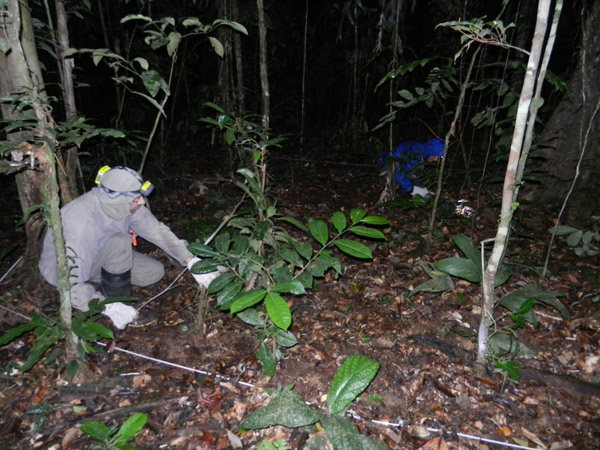 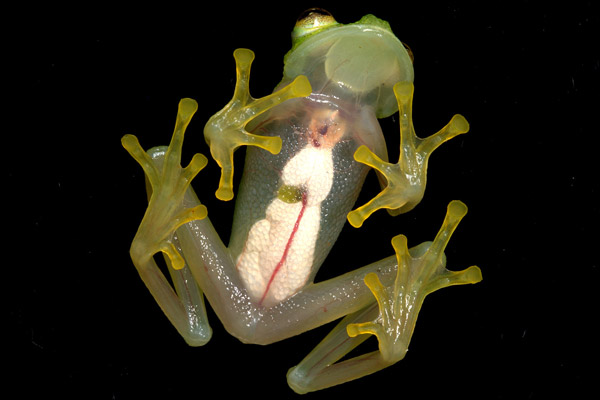 The delicate Hyalinobatrachium bergeri is the most abundant species of glass frog in the cloud forests of Manu National Park, where they can be found from ~800 to 2200 m.. Photo by Alessandro Catenazzi 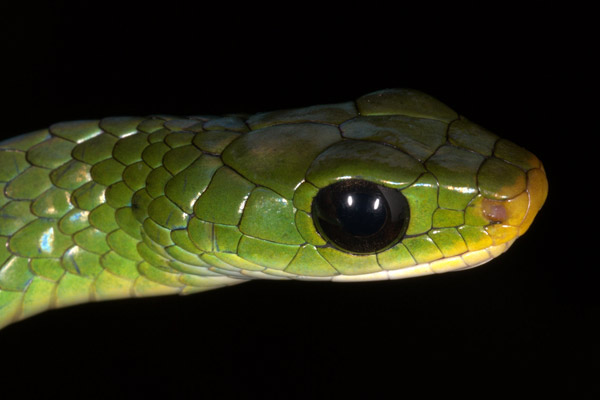 The snake Chironius monticola inhabits the cloud forest from 1000 to 3200 m. Photo by Alessandro Catenazzi 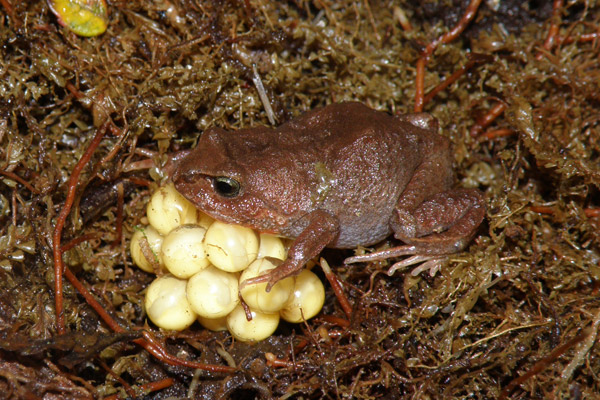 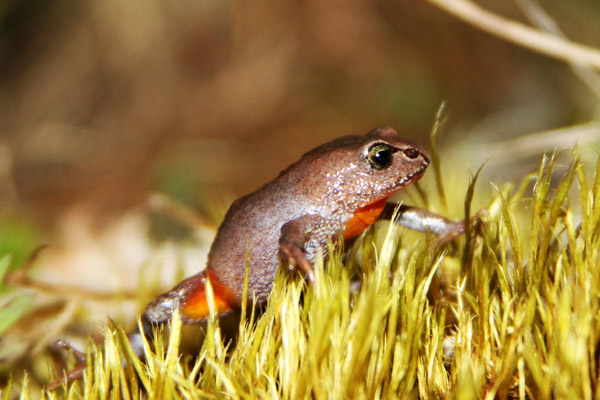 Bryophryne hanssaueri is a terrestrial breeding frog endemic from the upper cloud forests of Manu National Park. It inhabits moss mats covering the forest floor, which they use for retreat and reproduction.. Photo by Roy Santa Cruz 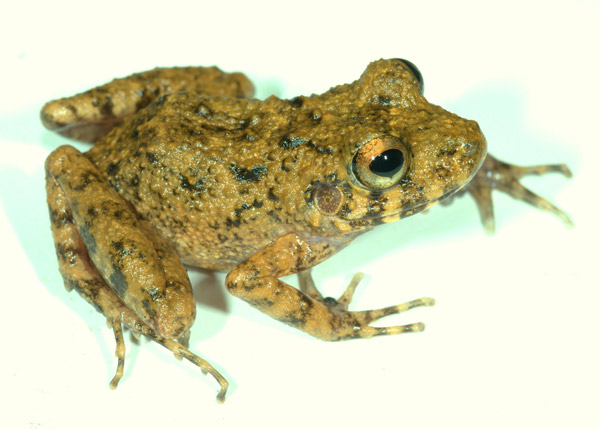 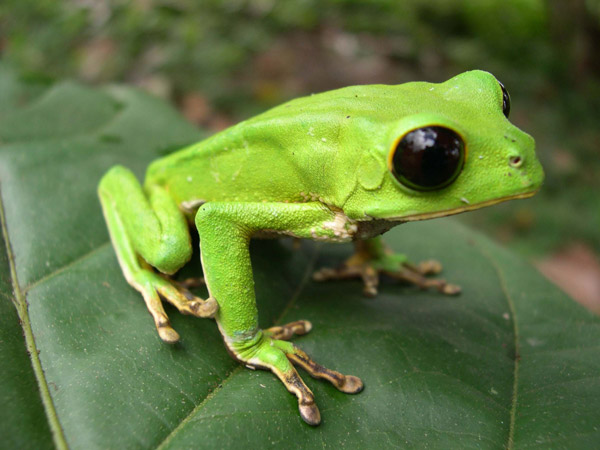 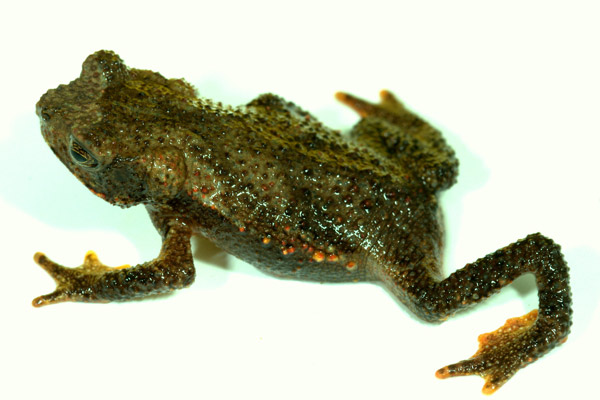 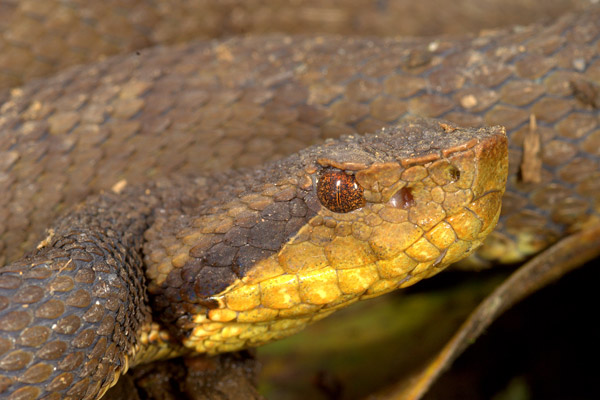 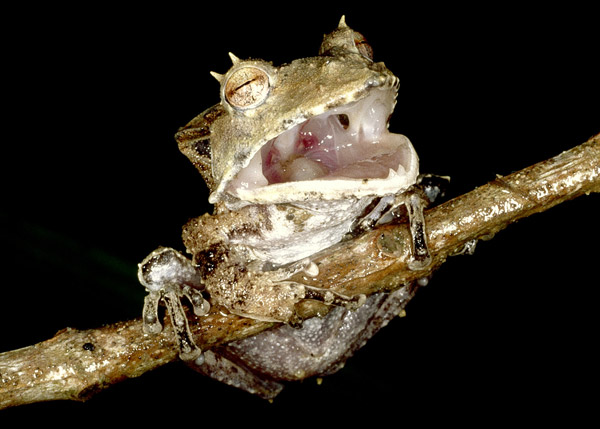 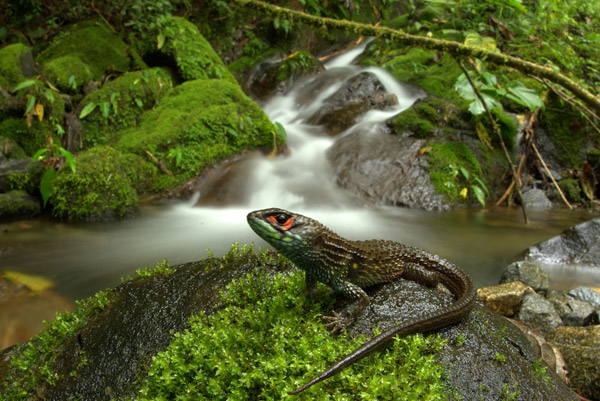 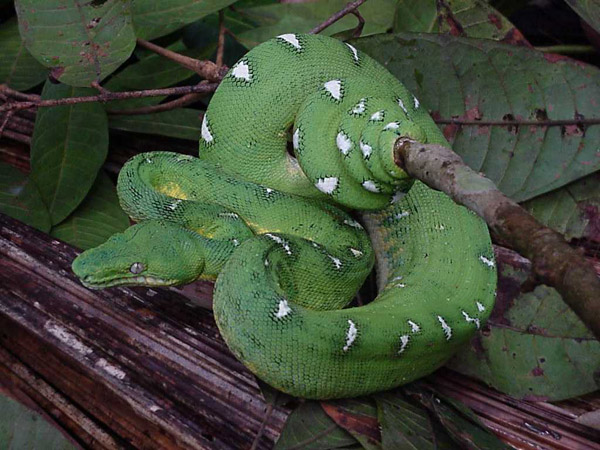 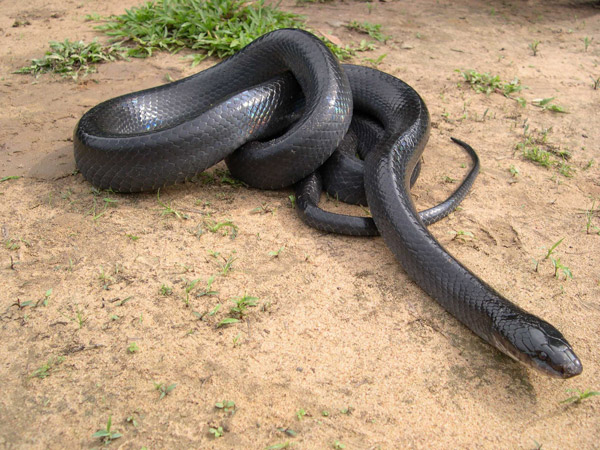 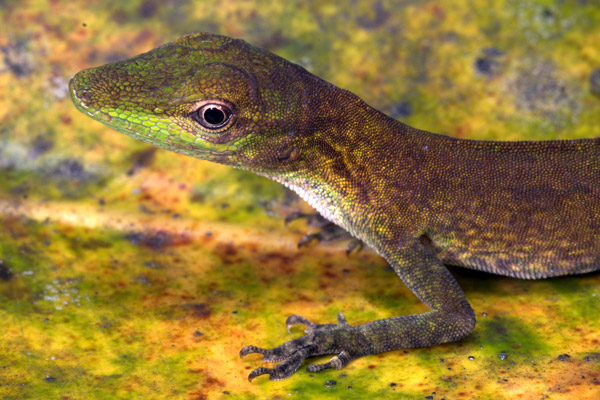 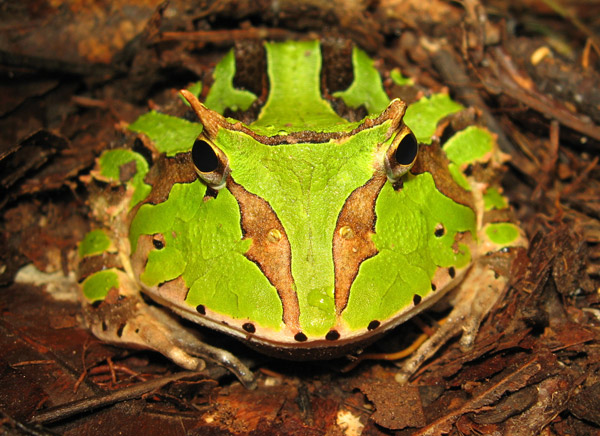 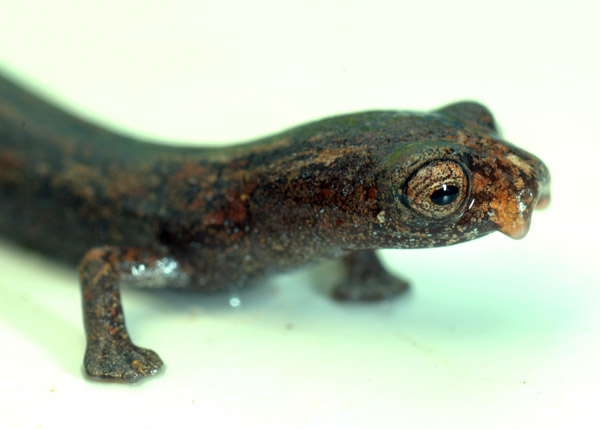 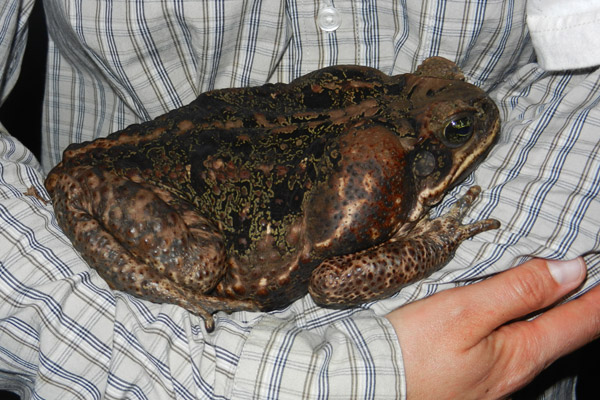 Rhinella marina, the cane toad, is one of the largest native amphibians living in the lowland and montane rainforests of Manu. The park is also home to the smallest frog in the Andes, the high-elevation frog Noblella pygmaea. Photo by Rudolf von May

CITATION: Alessandro Catenazzi, Edgar Lehr and Rudolf von May. The amphibians and reptiles of Manu National Park and its buffer zone, Amazon basin and eastern slopes of the Andes, Peru. Biota Neotrop., vol. 13, no. 4.