by Claire Salisbury on 3 December 2013

Environmentalists have responded with alarm to a proposed amnesty permitting the registration of illegally captured elephants in Sri Lanka. Recent reports in Sri Lankan media have outlined the proposal, stating that during the amnesty period it would be possible to register elephant calves for a fee of about $7,600.

Elephants are closely linked with Sri Lankan history and culture, and are considered sacred in both Buddhism and Hinduism. But the situation for elephants in the country is complicated. The increasing human population on the small island nation has resulted in the loss and fragmentation of elephant habitat. Sri Lankan elephants are classified as Endangered, with only an estimated 2,500–4,000 individuals left in the wild. Despite their threatened status, elephants frequently come into conflict with people over shared resources, resulting in both elephant and human deaths. 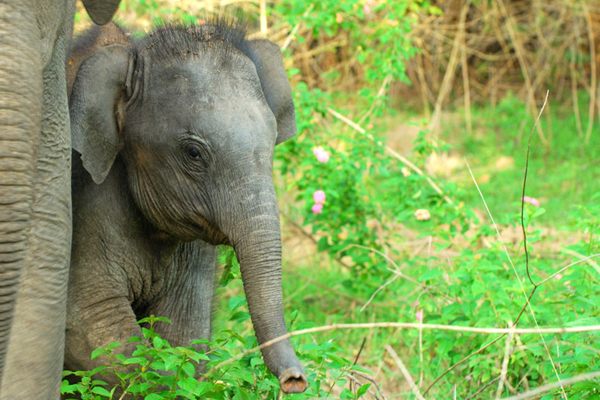 “Nearly 60% of the 150-250 [elephant] deaths reported annually are due to retaliatory killing by people,” Ajay Desai, Co-Chair of the Asian Elephant Specialist Group, told mongabay.com.

At the same time, a number of factors combine to make elephants highly sought after.

“There is a new set of wealthy people who want to keep elephant calves for prestige. Therefore there is a heavy demand, especially for elephant calves,” Vimukthi Weeratunga, Director of Operations at the Environmental Foundation Limited (EFL), a Sri Lankan NGO, told mongabay.com.

An impressive herd of Asian elephants. Photo courtesy of Amoghavarsha.

Prithiviraj Fernando, Chairman and Scientist at the Centre for Conservation and Research, agrees, stating, “In the past elephants were owned by nobility and this has some bearing on the desire to keep elephants today as it has a connotation of higher social status/prestige/wealth.”

But there is more to it than simply prestige; the importance of elephants in many cultural and religious ceremonies makes them lucrative possessions.

“Captive elephant owners make big money by renting elephants for many events, and in the tourism industry for elephant rides. Rent of an elephant for tourism can claim $1,500-2,000 per month,” Weeratunga explained.

The capture of elephants from the wild is prohibited by law, and registration is required for all calves born in captivity. Critics fear that by permitting the registration of all calves, regardless of origin, the amnesty will fuel illegal poaching, with a longer period of amnesty resulting in more captures. 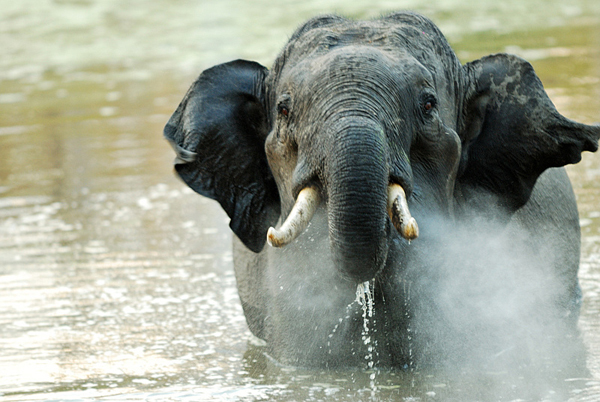 An Asian elephant enjoying the water. Photo courtesy of Amoghavarsha.

“It will contribute to the trade [of illegal elephants] as captors will capture large number of calves during the amnesty period to obtain legal papers,” Weeratunga said.

The motivation behind the amnesty is not clear. According to Fernando, the aim is “supposedly the registering of all elephants in captivity and prevention of future illegal captures.” However, some suspect that it is intended to benefit only a few people. Critics have raised the possibility that elephant owners with connections to those in power may be behind the scheme. The amnesty would make it possible for these people to legitimize any illegally held animals, and effectively start again with a clean slate.

Opposition to the amnesty is growing, and Weeratunga hopes that pressure from groups such as the EFL can prevent it altogether.

“EFL together with a few other environmental groups have been following this issue for some time and we are in the process of preparing legal documents to file a case against the authorities on this issue.”

(10/30/2013) Give it a few thousand years, and tusks could completely disappear from the Asian elephant (Elephas maximus). The beautifully smooth, elongated ivory incisors neatly bordering a long trunk are iconic in the public mind. The reigning hypothesis is that tusks evolved to help male elephants fight one another, as demonstrated when males compete over females in estrus. However, a recent study published in the journal Animal Behaviour has shown that tusks may not be key factors in tussles, at least as far as elephants are concerned.