Biologists in Sri Lanka have published the first documented evidence of dwarfism in an adult wild animal. A male Asian elephant (Elephas maximus) measuring just over 1.5 meters (five feet) in height was seen in an aggressive encounter with another male of average size. The elephant’s small stature was due to disproportionately short legs, according to the findings published in the IUCN/SSC Asian Elephant Specialist Group journal Gajah.
“The ‘dwarf’ was by far the main aggressor in the altercation and appeared to be older than the other, a young adult,” states the study. “Other than for the disproportionately short legs, morphologically and behaviorally the dwarf appeared normal.” 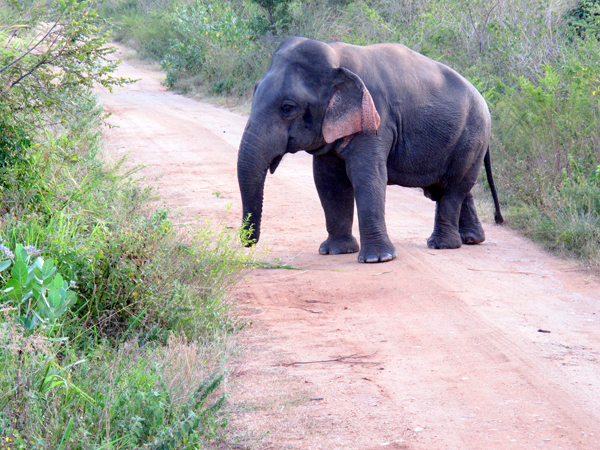 Dwarfism is a condition in which either the limbs are disproportionately short relative to the body, or the whole body is in proportion but is smaller than usual. It can be caused by a number of genetic mutations, and is relatively common in humans. It has also been selectively bred in many domestic animals, such as dogs, cats and cattle. However, dwarfism in the wild is incredibly rare.

“If you think about it, most animals, especially mammals, are either predators or prey. If you are either and are born with short limbs you would be at a very big disadvantage,” Prithiviraj Fernando of the Centre for Conservation and Research, and one of the authors of the paper, told mongabay.com. “A dwarf prey animal is very likely to be caught by a predator and similarly, a dwarf predator would find it very difficult to catch prey. So such individuals are very unlikely to survive in the wild. Elephants in Sri Lanka are unique (together with those in Borneo) in that they have no predators. So he was very lucky that he was born here!” 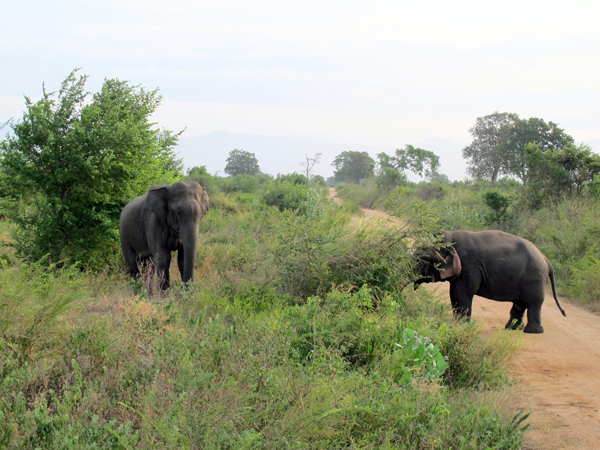 Dwarf elephant in an encounter with another male. Photo by Brad Abbott.

Although this individual appears to be doing well, it is likely to be an isolated incidence of dwarfism within the population. “There is no real advantage to the trait, so there will not be positive natural selection for it,” Fernando explained. “Also there may be an issue in mating. However, since elephants show a high degree of sexual dimorphism with males being much bigger [than females], he may be able to manage.”

Dwarfism is heritable, but the outcome for potential offspring is unclear. “As we do not know which mutation is responsible in this case, we also do not know the pattern of inheritance,” Fernando said. 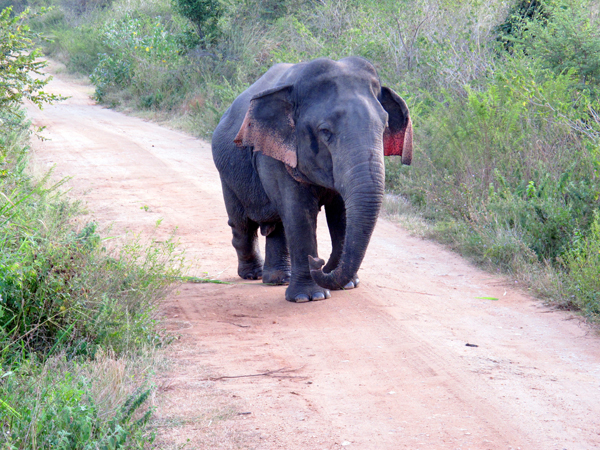 The dwarf adult male was in musth when researchers saw it, with visible temporal gland secretions. Also visible is a scar at the tip of the trunk, inflicted by a noose set to catch bushmeat. Photo by Brad Abbott.

The elephant has already overcome some of the biggest challenges associated with dwarfism, but does not necessarily face an easy life in the future.

“One of the main issues he could have had is suckling, as elephants feed their babies standing up and the infant has to reach up to the mother’s breasts. He has overcome this and has survived into adult hood,” Fernando said, adding that, “however, he is still subject to all the threats that elephants have to overcome, in order to survive in the wild – especially human elephant conflict. If you look closely you can see a thin, light-colored mark close to the tip of his trunk where it got caught in a noose set to capture bushmeat. On his back and legs there are lumps that are indicative of gun-shot injuries.” 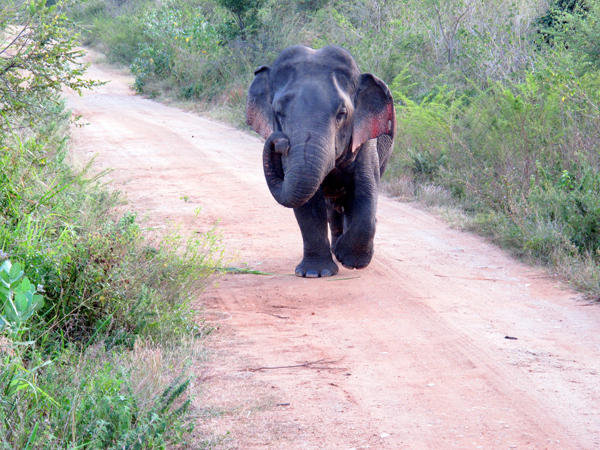 Dwarf elephant in an encounter with another male. Photo by Brad Abbott.

(10/30/2013) Give it a few thousand years, and tusks could completely disappear from the Asian elephant (Elephas maximus). The beautifully smooth, elongated ivory incisors neatly bordering a long trunk are iconic in the public mind. The reigning hypothesis is that tusks evolved to help male elephants fight one another, as demonstrated when males compete over females in estrus. However, a recent study published in the journal Animal Behaviour has shown that tusks may not be key factors in tussles, at least as far as elephants are concerned.