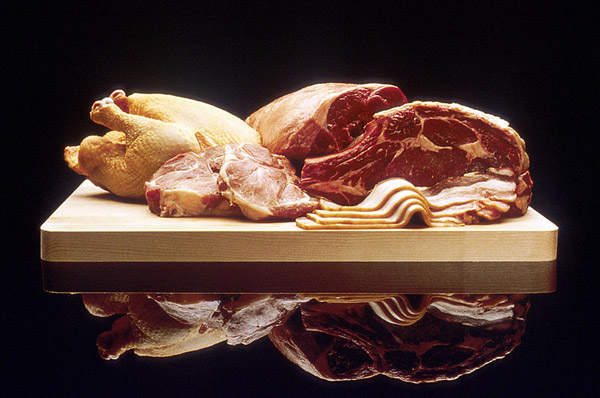 A new paper in Proceedings of the National Academy of Sciences has measured the “trophic level” of human beings for the first time. Falling between 1 and 5.5, trophic levels refer to where species fit on the food chain. Apex predators like tigers and sharks are given a 5.5 on trophic scale since they survive almost entirely on consuming meat, while plants and phytoplankton, which make their own food, are at the bottom of the scale. Humans, according to the new paper, currently fall in the middle: 2.21. However, rising meat-eating in countries like China, India, and Brazil is pushing our trophic level higher with massive environmental impacts.

“In the global food web, we discover that humans are similar to anchovy or pigs and cannot be considered apex predators,” the researchers write in the new paper.

Using data from the Food and Agricultural Organization (FAO) going back nearly 50 years, the scientists find that the human trophic level has risen from around 2.15 in the 1970s to 2.21 today. Trophic levels are on the rise in many developing countries as economies have expanded and millions have come out of poverty. However, the change has come with drastic environmental impacts: meat-eating is less-efficient than a plant based diet and, as such, generally requires far more land, water, and energy to produce the same amount of calories. 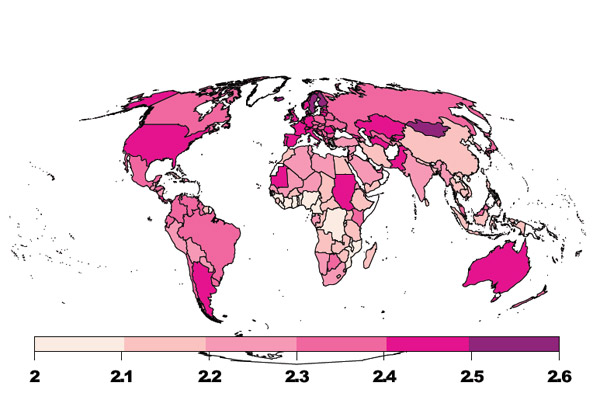 “[Human trophic level] is positively related to, for example, gross domestic product, life expectancy, CO2 emissions, and urbanization rate until a point after which the relationships plateau and then turn negative,” write the researchers.

The scientists clump the world’s countries into five different categories based on trophic level trends over the last four decades. Group one includes countries with low levels (i.e. mostly plant-eating) that remain stable, such as most of sub-Saharan Africa and Southeast Asia. Groups two and three are those that had lower trophic levels to start with, but are rapidly rising. These include India, China, Brazil, and southern Europe. Meanwhile, the U.S., Canada, Australia, Eastern Europe, and New Zealand make up the fourth group where trophic levels were high but began to decline in the 1990s. Finally, group five are those countries with the highest trophic levels—Iceland, Scandinavia, Mongolia, and Mauritania—but which are now declining as well.

Still, rising meat eating in rapidly-developing countries has outweighed declining meat consumption in parts of the wealthy world. Moreover, population growth has keep meat production rising at a steady clip: according to the Worldwatch Institute meat production has tripled globally since 1970.

Currently, around 25 percent of the world’s usable land is employed for pasture for our 1.7 billion heads of livestock, according to a report in 2010 entitled Livestock in a Changing Landscape. Moreover, 30 percent of arable land is used to grow food specifically to feed livestock with. This has had a massive impact on the world’s ecosystems, for example the majority of deforestation in the Amazon rainforest has been for cattle production. Around 5 percent of the world’s carbon emissions and 30 percent of methane emissions are also linked to livestock production. 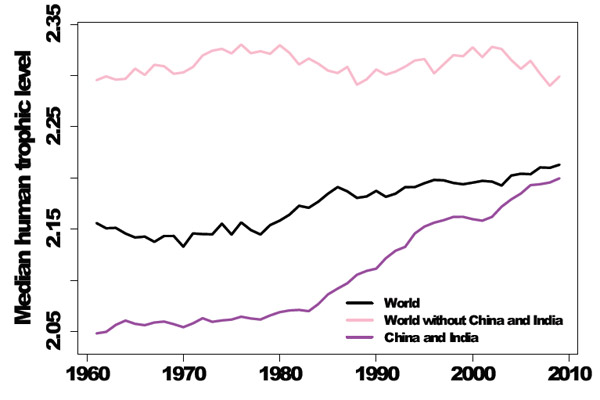