Giant clams are easy to recognize, but genetics proves there is more than meets the eye

Giant clams are among the more easily spotted invertebrates of the marine realm. However, some are actually quite cryptic and distinct species are often difficult to identify, claims a study recently published in PlosOne. Much attention has been focused on charismatic species in research, but the scientists who authored the study argue that giant clams also deserve the spotlight because of the potential threats and present misunderstandings regarding their taxonimical classifications.

Giant clams are used for a variety of purposes, including tool-making, as a meat source and for the pet trade. The study discusses eight species, with particular focus on two: the unfortunately named boring clam (Tridacna crocea) and the small giant clam (Tridacna maxima). Both the boring clam and small giant clam are native to waters surrounding Indo-Pacific islands, and although extensive genetic sampling has been done in the past, the relatedness of these two species is still something of a mystery. This study attempted to fill in these gaps – and came away with some surprising findings.

The study sampled populations of both species from the Solomon Islands, Australia, New Guinea and Wallacea. Scientists carried out their collection by carefully snipping small pieces of the clams’ tissue in a way that would not harm them. They then analyzed their genetic similarities by looking at portions of the clams’ mitochondrial DNA that are used to trace evolutionary relationships. Their results, coupled with those of previous studies, showed that both clam species share a common ancestor. However, while the boring clam also appears to be a sister species to other clams within the same genus, the small giant clam stands alone as more genetically distinct.

Other genetic indicators suggest that small giant clam populations in New Guinea and the Pacific are surprisingly distinct from one another, despite belonging to the same species. Additionally, a new species was suggested, referred to in the study as Tradicna sp. which may have been formerly identified as the small giant clam. For the boring clam, populations in New Guinea and the Western Pacific were also found to belong to two different genetic groups, with the New Guinea population found nowhere else in the world.

Despite having distinct morphological characteristics, the research indicates that the taxonomic classification of these clams is difficult to determine by appearance alone, stressing the importance of genetic analysis. This will further our understanding not only of marine biodiversity, but of the impact of commercial industries on clam populations, as well. 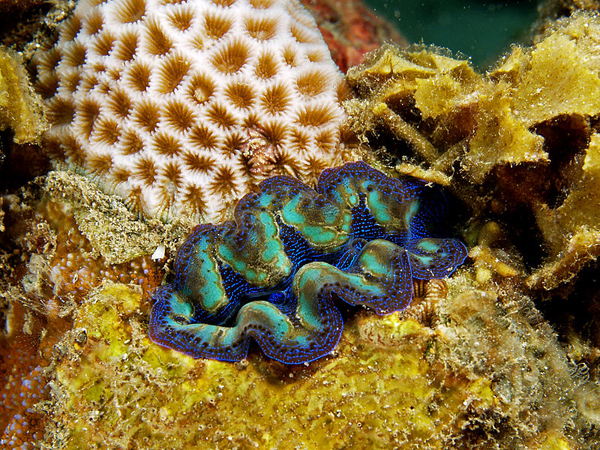 The authors argue that lack of genetic study could lead to a failure to understand the actual biodiversity of marine species, in turn leading to potential overestimation of stock abundance. Findings such as those of this study could be used in the development and implementation of fishery monitoring plans and in more effective conservation strategies for vulnerable populations. The latter point is of particular concern as giant clam larvae disperse by being carried away with currents that act as geographic barriers make it difficult for larval dispersal leading to a potential depletion of the population and slow recovery.

While the boring clam, the small giant clam and others of their genus may be stable for the time being, this study suggests that this may not always be the case. Understanding the genetics of these populations allows scientists to classify and describe them and thereby more effectively determine potential threats. As these clams demonstrate, there are many distinct species yet to be found – and not all can be spotted just by looking at them.