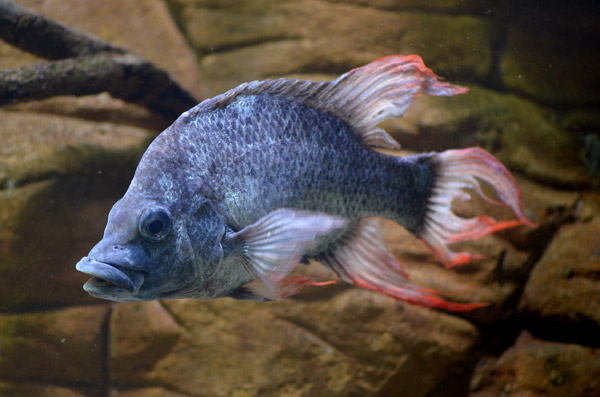 Researchers are celebrating after an urgent global search turned up a female mate for a fish that is on the brink of extinction.

In May, aquarists at ZSL London Zoo launched a worldwide appeal to find a female Mangarahara cichlid (Ptychochromis Insolitus), a fish that was feared to be extinct in its native habitat in Madagascar. At the time the only two known individuals — both male — resided at ZSL’s Aquarium.

After the call went out, ZSL was contacted by hundreds of aquarium owners, fish collectors, and scientists offering advice. One of the respondents was a Madagascar businessman who said he’s seen the fish in northern Madagascar. ZSL explains what happened next:


An exploratory expedition was arranged with vital support from HM Ambassador in the British Embassy of Madagascar, so that, along with aquarists from Toronto Zoo in Canada, Brian Zimmerman and Kienan Parbles from ZSL London Zoo could head off to Madagascar to search for the Mangarahara cichlid.

After days of searching empty streams, and rapidly losing hope of finding the cichlid, the team visited a tiny village built on the edge of a now-disconnected tributary from the Mangarahara River.

With help from local villagers, areas of water were cordoned off using nets to mark the search areas. Initially finding only other native species, the team were ecstatic when they finally found the first one of the last remaining Mangarahara cichlids in existence.

ZSL says its team was shocked to find the fish still surviving in its native habitat, which has been mostly destroyed.

“We weren’t holding out much hope of finding any fish in the wild, as so much of the Mangarahara River now resembles the desert because of deforestation and intensive agricultural use,” said Zimmerman, the Zoo’s Aquarium Curator. “These cichlids have shown remarkable survival skills, and managed to find one of the very last remaining water sources to live in, but their numbers are tiny and the non-flowing water is not an ideal habitat for them. We’re now doing all we can to protect these remaining fish.” 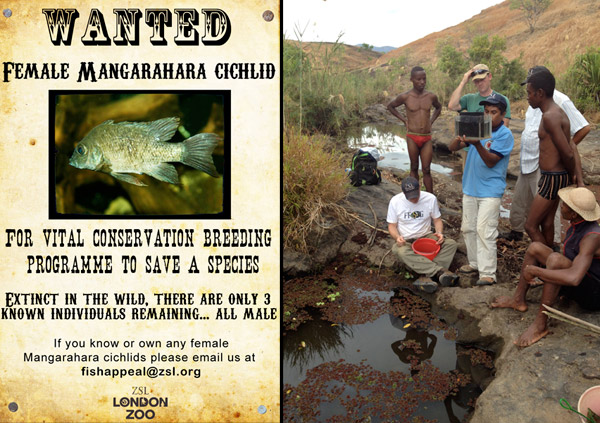 18 Mangarahara cichlids are now housed in a private aquaculture facility in Madagascar. ZSL is developing a conservation plan and captive-breeding program to bring the species back from the brink.

But while the Mangarahara cichlid’s story may end up with a happy ending, the same can’t be said for many other of Madagacar’s endemic cichlids, which have gone extinct or are endangered due to habitat loss and the introduction of invasive species like the tilapia and the Nile perch.