Bigger than all of Brazil, among the harshest ecosystems on Earth, and largely undeveloped, one would expect that the Sahara desert would be a haven for desert wildlife. One would anticipate that big African animals—which are facing poaching and habitat loss in other parts of the world—would thrive in this vast wilderness. But a new landmark study in Diversity and Distributions finds that the megafauna of the Sahara desert are on the verge of total collapse.

“While global attention has been focused on [biodiversity] hotspots, the world’s largest tropical desert, the Sahara, has suffered a catastrophic decline in megafauna,” the researchers write.

Looking at 14 large-bodied animals, the study found that 86 percent of them (ten of the species) were either extinct or endangered. Four of them (28 percent) are already extinct in the region. The Bubal hartebeest (Alcelaphus buselaphus buselaphus) is gone forever while the scimitar-horned oryx (Oryx dammah) is extinct in the wild, although there are efforts to re-introduce it. Meanwhile, two of the Sahara’s once top predators are gone: the African wild dog (Lycaon pictus) and the African lion (Panthera leo). 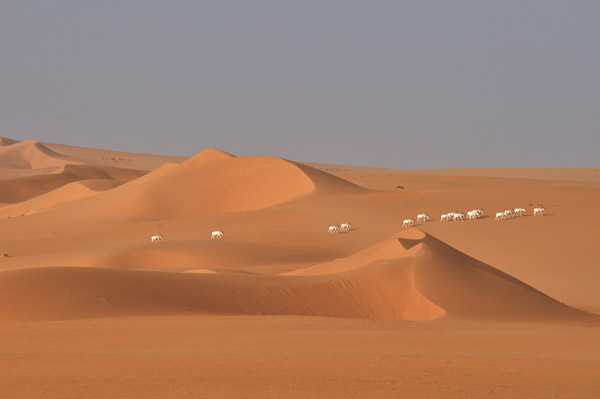 Megafauna that are still around aren’t doing much better. The dama gazelle (Nanger dama), the addax (Addax nasomaculatus), and the Saharan cheetah (Acinonyx jubatus hecki) are all on the razor-edge of extinction with each one listed as Critically Endangered by the IUCN Red List. The dama gazelle and the addax are absent from 99 percent of their historic range; less than 500 dama gazelles survive, while the addax is down to less than 300 animals. Meanwhile the Saharan cheetah is only found in 10 percent of its range with only 250 left. Another top predator—the leopard—is only found in 3 percent of its range. Even the North African ostrich (Struthio camelus camelus)—the world’s biggest—has lost 99.8 percent of its range.

“Greater conservation support and scientific attention for the region might have helped to avert these catastrophic declines,” the researchers write. “The Sahara serves as an example of a wider historical neglect of deserts and the human communities who depend on them.”

Of the 14 species, only one species is found in over half of its historical range: the Nubian ibex (Capra nubiana). Still even this ibex is currently listed as Vulnerable due to overhunting.

The researchers say that there are likely a number of reasons for the catastrophic declines. Hunting is widespread across the region and has likely decimated populations of prey and the predators who depend on them. In addition, the notoriously extreme environment coupled with political instability in many Saharan countries has likely hampered conservation efforts. 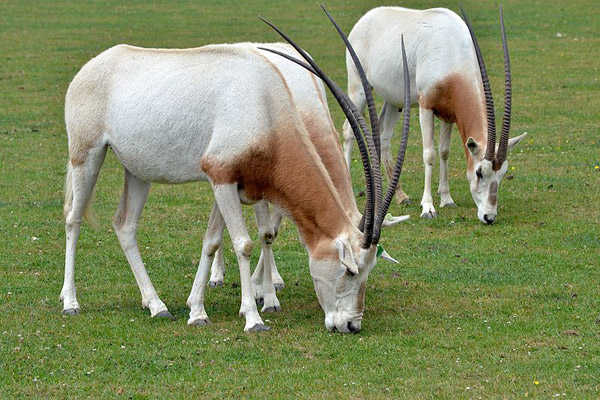 Scimitar-horned oryx in Marwell Zoo in the UK. Photo by: The Land/Creative Commons 3.0.

“However, it is difficult to escape the conclusion that lack of financial support and scientific attention have also played a role,” the researchers note.

Climate change is also a rising threat in the region, both to wildlife and local communities.

The scientists say the plight of the Sahara’s big species is mirrored by that of the region’s local communities, which have long been neglected by the international community.

“As with desert biodiversity, the plight of desert-dwelling people has gained little global attention,” the write. “The UN Convention to Combat Desertification (UNCCD), a convention specifically designed to address the needs of such communities, remains one of the weakest of the UN conventions. Lack of funding and political will have meant that progress towards the UNCCD’s goal of reversing land degradation and desertification has been elusive. Meanwhile the people living in these environments continue to be perceived as peripheral and unimportant and are neglected by political and business communities.”

Not all the news out of the Sahara is bleak, however. Niger recently established the Termit and Tin Toumma National Nature Reserve, home to addax, dama gazelle, and even Saharan cheetah. The new protected area is larger than Portugal. Meanwhile, Chad has proposed to reintroduce scimitar-horned oryx into the wild in its Ouadi Rimé-Ouadi Achim Game Reserve.

“Given low human densities and that over 90 percent of tropical arid and hyperarid lands remain uncultivated, management of natural resources in desert ecosystems may be substantially cheaper than maintaining or restoring tropical forest habitats,” the researchers write.

Contrary to popular belief, the world’s deserts host surprising biodiversity, even if found in lower abundance than other ecosystems. Many desert species have adapted specifically to the harsh conditions and are found no-where else.