Wolves and grizzlies aren’t best buddies. Burly bears can barge in on a feasting pack, making off with the wolves’ fresh kill. Wolves have been known to dig into bear dens and snag a cub.

But after gray wolves returned to Yellowstone National Park in 1995, grizzly bears ate more berries in the summer for a pre-hibernation nutritional boost, researchers reported Sept. 4 in the Journal of Animal Ecology. The wolves help grizzlies indirectly by preying on elk. Elk graze on shrubs such as serviceberry, so with fewer elk, plants have rebounded via a two-step process known as a trophic cascade.

A team led by ecologist William Ripple of Oregon State University showed that hungry grizzlies feasted heartily on the berry bonanza. By examining grizzly feces, known as scat, the scientists discovered grizzlies ate significantly more fruit a decade after wolves returned than they had before, as much as 20 times more in July and twice as much in August. They also considered the size of the elk population in their research area, about 60 kilometers north of Yellowstone landmarks like the Old Faithful geyser. 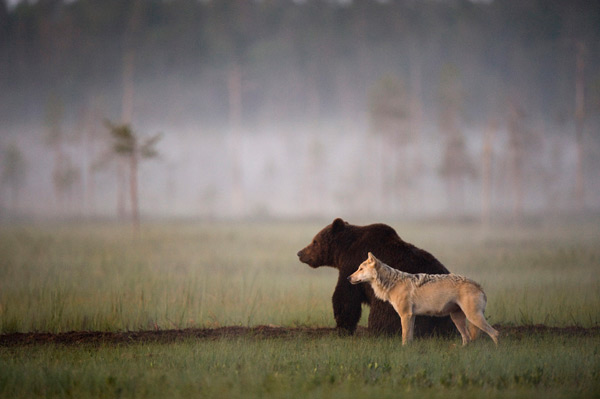 A rare glimpse of a wolf and a bear together. Photo by Lassi Rautiainen

“The lessons here are very simple,” Ripple told mongabay.com. “If humans remove apex predators from the top of the food web, then there will be significant cascading effects on nature.”

Park rangers killed Yellowstone’s remaining wolves in 1926. Freed from a top predator, elk herds mushroomed. By 1994, as many as 19,000 elk roamed the park. Ripple and other researchers had previously linked the robust elk population with drops in willows, aspen, and shrubs rich in berries, yummy food for bears. 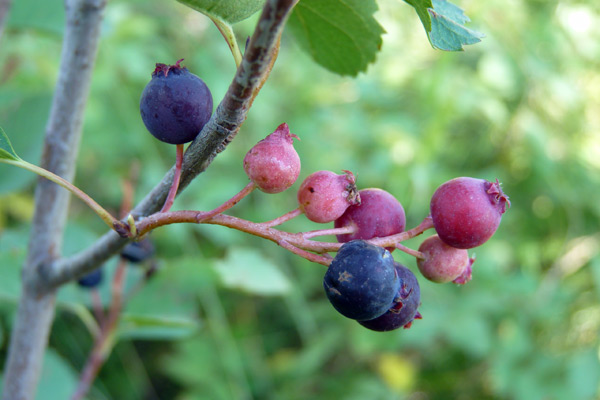 Grizzly bears aren’t the only ones who like serviceberries. Native Americans ate the berries raw and used branches from the shrubs to make arrows. Photo credit: William Ripple

Bears never disappeared from Yellowstone, but as few as 136 individuals remained in 1975 when the U.S. Fish and Wildlife Service (FWS) classified them as threatened under the Endangered Species Act. In 2007, when the grizzly population had swelled to about 600, the FWS tried to remove grizzlies from the endangered species list. However, in 2011 an appeals court ruled the agency didn’t have enough data about pine nuts, another of the bears’ favorite foods. 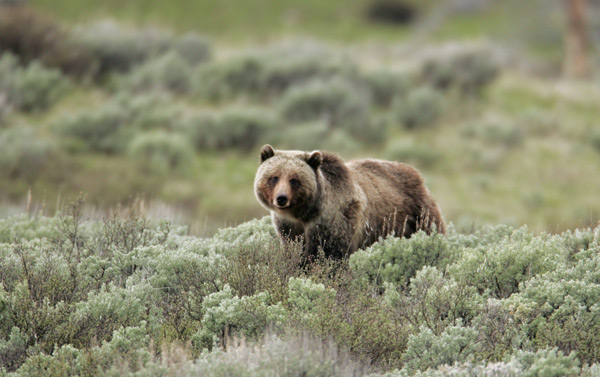 Also in 2011, the FWS removed wolves from the endangered species list, just six years after they returned to the park. “The combination of the two issues brought the potential links between wolves and grizzlies to the forefront,” Ripple said. But no one knew what those ties were, so Ripple and his team started their study.

Previously, researchers had assumed wolves helped grizzlies mainly by leaving carrion scraps behind, agreed Ripple and wildlife ecologist Aaron Wirsing of the University of Washington, who wasn’t involved with the research. “This paper reminds us there is another food source indirectly provided by wolves—berries,” Wirsing told mongabay.com. “What’s surprising here is the top-down effects of predators can spin off in all directions.”

Wirsing cautioned, however, that wolves probably were not “single-handedly” responsible for the grizzlies’ recovery. Ripple also emphasized the need to examine the bears’ diets more closely. 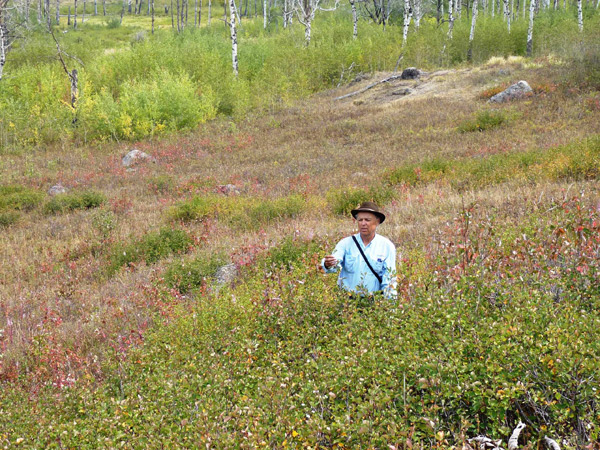 Both Ripple and Wirsing are pleased with how the first national park in the U.S. is now faring. “What’s really fun about Yellowstone is that although wolves get all the attention, the entire carnivore guild is on the road to recovery—including mountain lions, wolves and grizzly bears,” Wirsing said.

After decades of meddling, the land is healing said Ripple: “I’m amazed at how resilient nature appears to be.”

Becky Bach is a graduate student in the Science Communication Program at the University of California, Santa Cruz.