As a family, cats are some of the most well-studied animals on Earth, but that doesn’t mean these adept carnivores don’t continue to surprise us. Scientists have announced today the stunning discovery of a new species of cat, long-confused with another. Looking at the molecular data of small cats in Brazil, researchers found that the tigrina—also known as the oncilla in Central America—is actually two separate species. The new species has been dubbed Leopardus guttulus and is found in the Atlantic Forest of southern Brazil, while the other Leopardus tigrinus is found in the cerrado and Caatinga ecosystems in northeastern Brazil.

“[The molecular markers] indicate that the two tigrina populations do not interbreed with each other (because they do not share any allele or haplotype), and have been isolated for a considerable amount of time,” lead author of the paper in Current Biology Eduardo Eizirik of Pontifícia Universidade Católica do Rio Grande do Sul told mongabay.com “This is why we recognize them as distinct species. Their level of genetic divergence is also similar to that observed between other pairs of species in this group.”

Eizirik says the initial data shows that these two species of tigrina have been separated by at least 100,000 years.

Tigrinas are about the size of a house cat and prey on small mammals, lizards, eggs, and birds, largely at night. Despite being a charismatic predator, little is known about these cats though they are closely related to the better-known and larger ocelots and margays. Tigrinas are actually found as far north as Costa Rica and as far west as Peru and Ecuador, but the scientists aren’t sure yet how these other populations fit into the two Brazilian species. 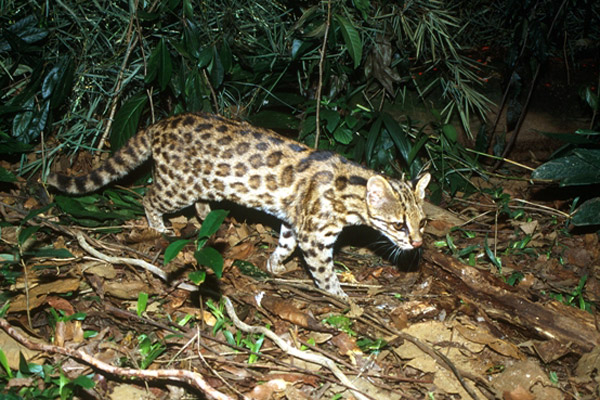 “At this point we don’t have much data on tigrinas from Central America and northern South America (i.e. north and west of the Amazon), so it is unclear if they represent additional species. But this is possible,” Eizirik told mongabay.com, adding that “the main challenge is to obtain sufficient biological samples from these regions, but we are trying our best to overcome this issue.”

Currently, the tigrinas of Central America, known as oncillas locally, are considered a distinct subspecies, Leopardus tigrinus oncilla, but not a full species.

“We have published some data on mtDNA sequences from tigrinas from Central America, and they were quite distinct, suggesting that they could represent an additional species. But mtDNA differentiation is not enough to warrant species-level differentiation, so our current focus is to perform thorough analyses (such as the ones we now report for the Brazilian populations) for the whole complex, which we hope to accomplish soon,” Eizirik says.

Of the two Brazilian species, the Leopardus tigrinus of northeastern Brazil is currently “virtually unknown,” with more research desperately needed for this elusive feline, according to Eizirik.

The tigrina is currently listed as Vulnerable by the IUCN Red List, while the Central American subspecies is considered Endangered. However, Eizirik notes that the discovery of two species (at least), instead of one could change the threat level for these cats.

“If anything the range of each species will be smaller than their joint geographic distribution, so that in itself should prompt a reassessment of each of them,” he says. Both Leopardus tigrinus and Leopardus guttulus are likely imperiled by habitat loss and degradation. The Atlantic Forest, where Leopardus guttulus prowls, is one of the world’s most degraded rainforests with only about 7 percent remaining, and much of this in small fragments. Meanwhile, over half of the cerrado savanna—the home of the Leopardus guttulus—has been lost to cattle and soy farms in just a few decades. Although, it’s plight is lesser-known than the Amazon’s, the cerrado is disappearing at twice the rate with experts warning it could be gone by 2030. The adjacent Caatinga ecosystem is a dry, tropical forest and is also under pressure by big agriculture in Brazil as well as climate change. 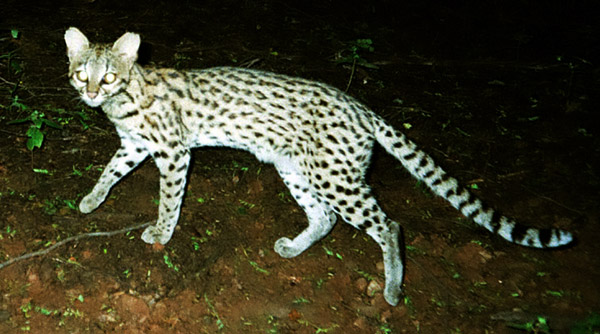 Leopardus tigrinus is found in the cerrado and Caatinga regions of Brazil and is actually the lesser-known of the two tigrinas. Photo by: Projeto Gatos do Mato – Brasil/Project Wild Cats of Brazil.

While the two tigrina species don’t interbreed,Leopardus guttulus is also threatened by hybridization with another small wild feline in the region, Geoffrey’s cat (Leopardus geoffroyi).

Although it took DNA research to discover that there is more than one tigrina roaming Brazil, the possibility had been raised by researchers in the past.

“Fifty years ago, Leyhausen suggested that there could be more than a single species of tigrina, based on morphological and behavioral observations,” the researchers write in the paper. “Limited data on captive breeding suggested to him that animals likely representing Leopardus tigrinus and Leopardus guttulus might have some degree of reproductive incompatibility, but this intriguing hypothesis was not tested any further until now.”

The discovery of a new cat species using DNA is not unheard of: in 2006, scientists announced a new species of clouded leopard, the Sunda clouded leopard, based on DNA evidence and the animal’s coat patterns. If accepted by the wider scientific community, Leopardus guttulus will be the 41st species of cat in the world. But given the increasing use of DNA evidence to determine species, it’s likely there are even more hidden cats out there.

(11/06/2013) The Wildlife Conservation Society’s Central Park Zoo is debuting a pair of snow leopard cubs that were born this past summer.

Samburu’s lions: how the big cats could make a comeback in Kenya

(09/30/2013) In 2009 conservationists estimated that less than 2,000 lions survive in Kenya, a drop of 26 percent in just seven years. In addition, the East Africa country continues to hemorrhage lions: around a hundred a year. Poaching, poisoning, and large-scale habitat loss has put lions on the defensive across Africa, but even countries once thought lion strongholds–like Kenya–have seen populations harried to devastation and in some cases local extinction. Shivani Bhalla, a fourth-generation Kenyan, is working to turnaround this trend in Samburu National Reserve.

(09/17/2013) Everyone knows that tigers, pandas, and blue whales are threatened with extinction—but lions!? Researchers were shocked to recently discover that lion populations have fallen precipitously: down to around 30,000 animals across the African continent. While 30,000 may sound like a lot, this is a nearly 70 percent decline since 1960. In addition, lion populations are increasingly fragmented with a number of populations having vanished altogether. However, there is hope: one place where lion populations are actually on the rise is Niassa National Reserve in Mozambique. Here, lion populations have risen by around 60 percent in just seven years. In part this is due to the effort of Colleen and Keith Begg.

Protecting predators in the wildest landscape you’ve never heard of

(09/10/2013) The Serengeti, the Congo, the Okavango Delta: many of Africa’s great wildernesses are household names, however on a continent that never fails to surprise remain vast wild lands practically unknown to the global public. One of these is the Ruaha landscape: covering 51,800 square kilometers (20,000 square miles) of southern Tanzania’s woodlands and savannah, Ruaha contains the largest population of elephants in East Africa, over 500 bird species, and a wealth of iconic top predators, including cheetah, hyena, wild dogs, leopard, and—the jewel in its crown—10 percent of the world’s lions. But that’s not all, one of Africa’s least-known and secretive tribal groups, the Barabaig, also calls Ruaha home.