Yesterday, the Filipino delegate to the ongoing climate summit, Naderev ‘Yeb’ Saño, dared climate change deniers to take a hard look at what’s happening not just in the Philippines, but the whole world. Over the weekend, the Philippines was hit by what may have been the largest typhoon to ever make landfall—Typhoon Haiyan. Reports are still coming in days later, but the death toll may rise to over 10,000 with whole cities simply swept away.

“To anyone who continues to deny the reality that is climate change, I dare them to get off their ivory towers and away from the comfort of their armchairs,” Saño said as reported by the Guardian. “I dare them to go to the islands of the Pacific, the islands of the Caribbean and the islands of the Indian ocean and see the impacts of rising sea levels; to the mountainous regions of the Himalayas and the Andes to see communities confronting glacial floods, to the Arctic where communities grapple with the fast dwindling polar ice caps, to the large deltas of the Mekong, the Ganges, the Amazon, and the Nile where lives and livelihoods are drowned, to the hills of Central America that confronts similar monstrous hurricanes, to the vast savannas of Africa where climate change has likewise become a matter of life and death as food and water becomes scarce.”

He added, “[Climate change deniers] may want to pay a visit to the Philippines right now.”

Saño—currently attending the 19th annual Conference of the Parties (COP) to the UN Framework Convention on Climate Change (UNFCCC) in Warsaw, Poland—has gone on a fast at the summit “until a meaningful outcome is in sight.” He told delegates yesterday that, “We can stop this madness right here in Warsaw.”

At this time, no one knows for certain how much of a role climate change played in Typhoon Haiyan’s devastation. However, scientists are largely convinced that climate change will increase the intensity of tropical storms like typhoons and hurricanes. Warmer sea surface waters likely translates into more precipitation and higher wind speeds. In addition, rising sea levels are certainly increasing the height and extent of storm surges, which can lead to more causalities and damage.

“Science tells us that simply, climate change will mean more intense tropical storms,” Saño said. “As the Earth warms up, so do the oceans. The energy that is stored in the waters off the Philippines will increase the intensity of typhoons and the trend we now see is that more destructive storms will be the new norm.”

According to scientists, this doesn’t mean climate change causes the storms, but instead intensifies them.

“The answer to the oft-asked question of whether an event is caused by climate change is that it is the wrong question,” climatologist Kevin Trenberth wrote in a paper last year. “All weather events are affected by climate change because the environment in which they occur is warmer and moister than it used to be.”

Scientists are far less certain about whether or not climate will increase or decrease the total number of hurricanes and typhoons as different studies have come to contrasting conclusions. However, the current consensus is that as global temperature rise, the number of tropical storms the world over will likely stay-the-same or decline, but they will become more intense.

Typhoon Haiyan comes less than a year after the Philippines was hit by Typhoon Bopha—during last year’s the UN Climate Summit—which at the time was considered the costliest typhoon to ever strike the Philippines. There’s little doubt that Bopha will be eclipsed by Haiyan. Around a 1,000 people are believed to have perished in Bopha. According, to the Filipino government, 1,774 have died from Haiyan but that number is expected to rise considerably, around 800,000 have been displaced. 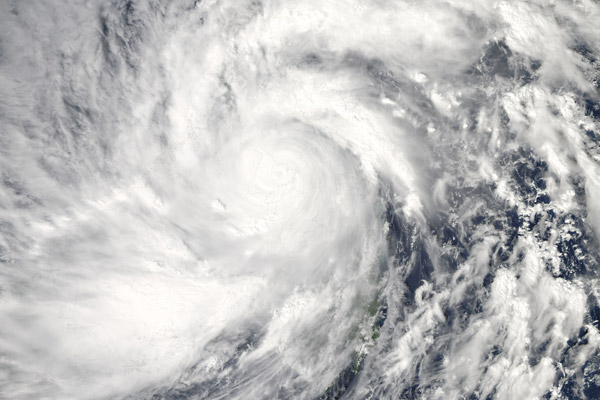 Typhoon Haiyan as seen by satellite as it swept over the Philippines. Photo courtesy of NASA.

(11/06/2013) The concentrations of carbon dioxide in the atmosphere hit a record high last year, according to a new report by the World Meteorological Organization (WMO). While this was not a surprise given still-rising global emissions, the concentration rose significantly more than the average this decade. According to the WMO’s annual greenhouse gas bulletin, CO2 concentrations hit 393.1 parts per million (ppm) in 2012.

(11/05/2013) Showtime has recently released its first trailer for the network’s new series on the impacts of global warming worldwide, entitled Years of Living Dangerously. The series, which will debut in April 2014, had employed some of America’s most well-regarded politicians, journalists, intellectuals, and actors to tell how climate change is already impacting communities around the world.

(11/05/2013) Last month, over a hundred representatives from zoos and aquariums around the world joined climate activism group, 350.org, pledging that their institutions would take action against global warming, including the possibility of divesting from fossil fuel companies. The effort, dubbed Zoos and Aquariums for 350, was launched during the annual meeting of the Conservation Breeding Specialist Group (CBSG).