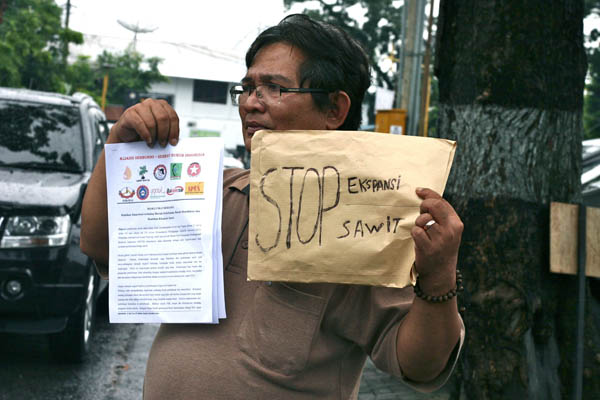 Protesters from 10 Indonesian labor unions and four NGOs descended on the Roundtable on Sustainable Palm Oil (RPSO) meetings in Medan last Tuesday, urging the industry body to take serious steps to end what they claim is rampant abuse of workers on RSPO-certified plantations.

According to the Indonesian Trade Unions Alliance (SERBUNDO), which organized the demonstration, RSPO standards designed to protect workers have not been enough to prevent low wages, safety problems and even child labor.

Child labor is also common on palm oil plantations, particularly since unrealistic piece-rate targets leave some workers with no other choice but to employ the help of their families to meet the daily palm fruit quotas, according to SERBUNDO.

During the protest, representatives from each of SERBUNDO’s 14 member organizations were invited to meet with RSPO representatives, including the RSPO Secretary General Darrell Webber, SERBUNDO coordinator Herwin Nasution told Mongabay-Indonesia in an interview on Monday.

“[Workers] are not represented in the RSPO,” Herwin said. “That’s why we built the alliance.” Indonesia gets huge profits from the palm oil industry, he added, “but workers are still living far below standards.”

In order to receive RSPO certification, member companies must allow their plantations to be audited in order to prove they comply with the RSPO’s Principles & Criteria – a set of standards designed to ensure companies are not harming society or the environment in their operations.

According to the RSPO’s P&C standards, companies must provide a decent living wage, respect the rights of workers to join trade unions and provide adequate training to all employees. Child labor and forced labor are also prohibited.

In the meeting with Webber, SERBUNDO representatives presented the group’s demands. The representatives urged the RSPO to oblige companies to comply with existing RSPO regulations regarding decent wages and freedom of association.

They also asked the RSPO to oblige member companies to stop using contract or piece rate workers, particularly for the more dangerous jobs such as harvesting palm fruits or spraying plants with pesticides.

The group also asked the RSPO to create a labor working group to handle labor rights issues, which should include a union representative.

The organization so far has not involved labor unions, Herwin said. Including unions in the working group is important since it will guarantee that workers have a voice in the multi-stakeholder body. Oil palm plantation worker in a nursery in Malaysia.

In comments emailed to Mongabay-Indonesia on Tuesday, the RSPO’s communication’s manager Stefano Savi said the group was taking the SERBUNDO demands seriously.

“The RSPO has received the comments from SERBUNDO, and highly values the input of the workers on the ground when addressing problems related to labor,” Savi said.

“With the new RSPO P&C 2013, matters related to labor and human rights have become even more represented in the standard,” Savi said, referring to the revised standards that went into effect earlier this year.

“This includes most of the matters raised by SERBUNDO,” he added.

Regarding the formation of a labor working group, Savi said that labor issues “will be discussed under the newly formed Human Rights Working Group, whose terms of reference have recently been developed.”

“A meeting of this working group will be held in December,” Savi added, though he did not confirm whether a union representative would be invited to the meeting.

Savi also said that while the RSPO uses independent and accredited certification bodies to certify plantations, reports from RSPO members were also key to make sure certified plantations are complying with the required standards.

“Although this system is very solid, it can, like all systems, fail, and in this case the RSPO relies on members to report any issues on the ground to the RSPO complaints panel,” Savi said.

He also said that steps had been taken to improve the complaints mechanism, including through a resolution passed by the general assembly on Thursday to guarantee better fairness, transparency and impartiality in the complaints system.

The resolution, which was put forward by one of Serbundo’s NGO members, Sawit Watch, will improve the mechanism “mainly by ensuring that there is a stricter separation of executive powers in handling complaints and grievances,” Savi said. Yet despite the RSPO’s standards and the complaints mechanism, a number of serious labor abuses have been exposed in recent months.

According report published by Bloomberg Businessweek in July, there are thousands of child laborers working in the palm oil industry and debt bondage is common.

The report, based on a nine-month investigate by modern-day slavery expert E. Benjamin Skinner, uncovered incidents of both of these types of abuse on plantations owned by RSPO member Kuala Lumpur Kepong (KLK) in Indonesia.

The report found that a labor management firm contracted by KLK had transported workers as young as 14 from their homes in Sumatra to KLK plantations in East Kalimantan, where they were allegedly not paid for two years and not allowed to leave the plantation, according to the report.

KLK has since claimed it has blacklisted the labor management firm involved, but it did not report the firm to authorities.

In another report released on Friday, Sawit Watch and the International Labor Rights Forum also found serious violations of RSPO labor standards on three Indonesian plantations certified as “sustainable” by the RSPO.

The alleged violations of RSPO standards include trafficking and debt bondage, child labor linked to unrealistic quotas and the use of casual day laborers who must pay for their own safety equipment for dangerous jobs such as spraying pesticides. 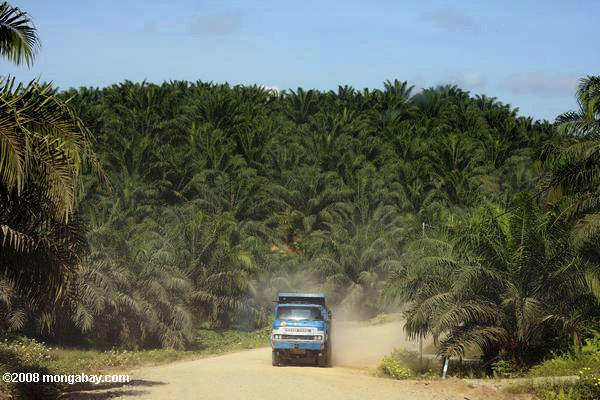 Fresh fruit bunches being carried by a truck in Malaysia.

Despite these reports, Herwin still sees the RSPO as a useful mechanism to protect plantation workers.

“It [the RSPO] can become a very important tool to give rights to plantation workers,” Herwin said.

At the moment, RSPO-certified plantations are not necessarily in line with RSPO standards to guarantee labor rights, Herwin said, but “that is why we will constantly monitor [the situation on plantations] and will put pressure on them [the RSPO] so that we can demand that workers rights really will be respected.”

Savi also welcomed the engagement with Serbundo. “We are glad to see that workers feel they can relate to the RSPO, and see the RSPO as a tool of change, when in need of addressing these issues,” he said.

(11/14/2013) A mob of 150 palm oil workers has disrupted court proceedings against Kalista Alam, an Indonesian palm oil company accused of illegally converting blocks of protected peat forests for an oil palm plantation in Aceh, Sumatra. The Kalista Alam case is widely seen as a test of Indonesia’s commitment to forestry sector reform.

(11/07/2013) Some of the largest palm oil companies are clearing forests and peatlands without seeking consent of local communities, leading to a spate of unresolved conflicts in plantation concessions around the world, warns a coalition of NGOs and researchers. Members of the Roundtable on Sustainable Palm Oil (RSPO) are violating the rights of local communities in tropical forests and failing to live up to social and environmental commitments, the coalition said in a report released on Thursday.