Mining the Heart of Borneo: coal production in Indonesia

Commentary by Wendy Miles on 20 November 2013

Indonesia is the world’s top exporter of coal – supplying energy to China, India, and elsewhere.

Indonesia is also ranked the fourth top emitter of greenhouse gases in the world (after China, the USA, and the European Union), largely due to high deforestation rates and peatland fires. This ranking does not take into consideration the carbon emissions that Indonesia ‘exports’ in the form of coal.

This week in Poland, Indonesian delegates are discussing both coal and carbon emissions at the United Nations’ conference on climate change.

The 2013 Conference of the Parties (COP) for the UN Framework Convention on Climate Change (UNFCCC) has been dubbed the “Coal COP” because the World Coal Association is holding its own summit just across the river from where representatives of nearly 200 nations are discussing how to tackle climate change. Poland has been criticized for hosting both summits simultaneously, and nicknamed ‘Coaland’ for its heavy reliance on coal (over 89% of its energy is coal-powered).

In previous COPs, Indonesia has been praised by the international community for its commitment to reduce greenhouse gas emissions 26% (41% with international help) by the year 2020. As part of this pledge, a two-year moratorium on forest-clearing concessions was enacted in 2011. However, new high-resolution forest maps published last week in Science revealed that deforestation continued to increase from 2011-2012, and the June 2013 fires in Sumatra were the worst on record since the Indonesian forest fires of 1997.

Another challenge to cutting Indonesia’s emissions is how to balance land and natural resource conservation with economic development. Indonesia’s “Master Plan for Economic Expansion and Acceleration” (MP3EI) maps out the country’s development vision until 2025. The economic plan depends heavily upon natural resource extraction, including the opening of new coal reserves in both Sumatra and Kalimantan. 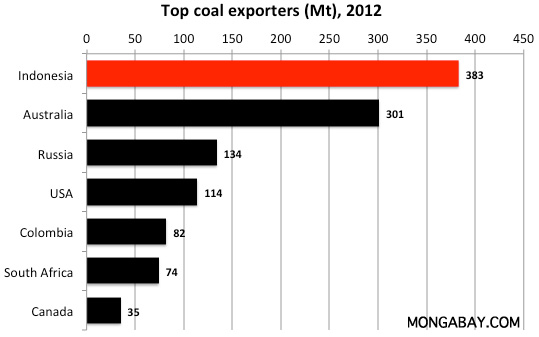 Coal – perhaps more than any other fossil fuel – demonstrates the challenges our society faces in the fight against climate change. Coal is responsible for 44% of carbon emissions from fuel globally – more than oil (35%) and natural gas (20%). Coal releases more carbon dioxide than any other fossil fuel, and coal mining is responsible for 8-10 percent of human-made methane emissions globally.

Humanity remains heavily dependent on coal for heating, electricity, and steel manufacturing. Although we must break our dependence on coal to limit our impacts on the climate, the transition will require an international energy paradigm shift.

“The basic technology that we’re living with today is exactly the same premise and process that turned the industrial revolution 200 years ago,” energy executive Peter Bond explained at COP-19, “the processes continue to be more efficient, but the actual philosophy is no different to when Mr. Watt invented the basic steam engine.”

This insight from the coal industry is important because, despite all of our technological advances over the last two centuries, our society is still fueled by coal, oil, and natural gas. But coal cannot fuel human progress indefinitely. At 2012 rates, it is estimated that the world’s coal resources will run out in less than 132 years. Thus, we are using the fossil fuel reserves that future generations will also need, until human society finds alternatives. 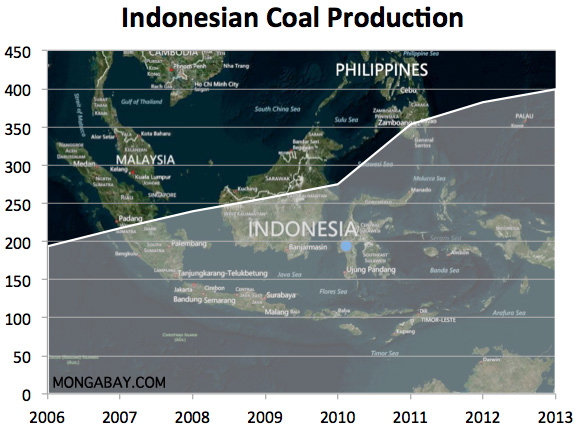 “The bottom line for the atmosphere is that most existing coal reserves will have to stay in the ground,” UN Climate Chief Christiana Figueres told the World Coal Association in Warsaw this week. Yet, these coal reserves are continuing to be opened and expanded in countries across the world – including Indonesia.

In Central Kalimantan province plans are moving forward to construct a railway that will stretch 425 kilometers and transport coal from the “Heart of Borneo” to a port near the Java Sea. Along the way it will pass through the districts of Murung Raya, North Barito, East Barito, South Barito, and Kapuas – displacing an unknown number of local people.

The railway will be built through a gradient of ecosystems and is expected to result in deforestation and degradation of wetlands. Environmental problems associated with coal mining include acid run-off and sedimentation, which are difficult to contain and result in water pollution. This pollution will occur in the Barito water catchment, a major watershed on the island of Borneo, risking the water supply of local people. Even the floating ash particles of coal are toxic to human health – containing lead, arsenic, and mercury.

Costing approximately US $2.5 billion (which will be partially financed by Indonesian tax dollars through a “public-private partnership”), the “Puruk Cahu-Bangkuang-Batanjung Railway” will be capable of transporting upwards to 49.7 million metric tons of coal each year from the interior of Borneo. 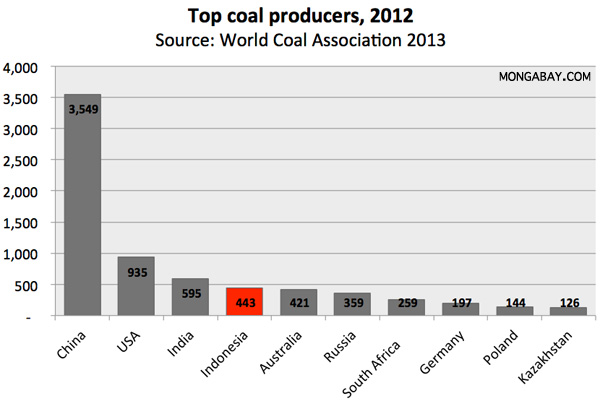 Decisions are being made right now – like whether to expand coal extraction in Kalimantan – which will shape Indonesia’s future environment and influence the world’s climate.

Looking towards the future, UNFCCC Executive Secretary Christiana Figueres called on world leaders, the coal industry, and society to chart a new path:

“We must urgently take the steps that put us on an ambitious path to global peaking by the end of this decade, and zero-net emissions by the second half of the century. Steps that look past next quarter’s bottom line and see next generation’s bottom line, and steps to figure health, security and sustainability into the bottom line. For it will be your children and my children, our grandchildren and their grandchildren who will look back at today and judge our collective commitment to them.”

About the Authors: Rut Dini Prasti H. conducts research for Yayasan Tambuhak Sinta, an NGO working to mitigate mercury pollution from small-scale gold mining in Indonesia. Kussaritano is the Executive Director of the Central Kalimantan Environmental Partnership. Wendy Miles is an Environmental Protection Agency STAR Fellow at the University of Hawaii and East-West Center.