Some good news out of the Amazon rainforest: given enough time, deforested land can rebound enough to host bird species that had previously deserted the area, according to a recent study in The Auk.

Between 1992 and 2011, a team led by Philip Stouffer of Louisiana State University tracked the movements of birds through fragmented rainforest in the Brazilian Amazon. Using soft nylon stretches called mist nets, they snagged nearly 4,000 birds at the margins between old growth forests and tracts of between old growth rainforest and forest recovering after being abandoned by cattle ranchers.

As the so-called secondary forest regenerated, birds crossed the borders more frequently, the team found. These areas of regrowth become more habitable to birds with time, although the results suggest that it can take at least a decade or two for species to return. 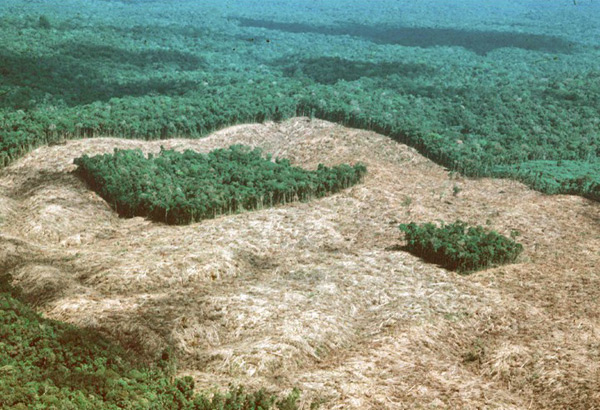 An aerial photo of a forest fragment immediately following clearance in the 1980s as part of the Biological Dynamics of Forest Fragments Project. Credit: Rob Bierregaard.

The work is part of the Biological Dynamics of Forest Fragments Project, the world’s largest and longest-running study of habitat fragmentation. Starting in 1979, researchers systematically chopped and burned swaths of Brazilian rainforest into different-sized fragments. They cleared the regrown trees at varying rates until 1990 to study how the forest’s age affects the ecosystem. The Smithsonian Tropical Research Institute and Brazil ‘s National Institute for Amazonian Research run the project jointly.

As loggers and cattle ranchers clear land, bird populations become marooned in islands of primary forest. “A huge proportion of the resident birds barely fly,” said the study’s first author, Luke L. Powell, in an interview with mongabay.com. “When there are hard borders, like pastures or young secondary growth or roads, they are often literally imprisoned.”

When people abandon deforested land, the rainforest slowly reclaims it. Eventually, birds begin to use the clumps of secondary forest as corridors between thickets of old growth. It’s unclear whether the regrowth itself ever becomes a suitable home for the birds. But the corridors serve as pathways for recolonizing animals to move between tracts of primary forest too small to support their own populations.

Stouffer’s colleagues hoped they might eventually catch as many birds on the edges of these patches as they did in undisturbed forest. Most species rebounded nearly to pre-fragmentation levels after between 13 and 34 years, although a few were never caught at all. On average, recovery took 26 years. 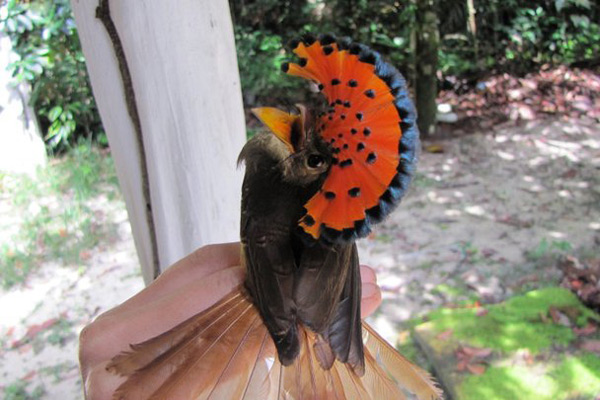 The slowest to come back were terrestrial insectivores, ground-dwelling birds that eat insects. Scientists are not sure why they do so poorly in secondary forest, but it makes them a good marker for how closely a regrown area resembles old growth as a habitat.

“The median age of Amazon regrowth is only around five years. As this study shows, that’s too young for most rainforest wildlife,” said Bill Laurance, a distinguished research professor at James Cook University in Cairns, Australia, in an interview with mongabay.com. “This highlights the importance of retaining older secondary forests.”

About 54% of the Amazon is set aside as protected land, either for regrowth or carefully monitored logging, though much of that is fragmented. The research team hopes to motivate conservation programs that take advantage of the corridors, according to Powell.

He notes one surefire way to garner support: round up powerful people and show them what they’re saving. “When you catch a bird and put it in their hands, and they’re in the jungle without their Blackberries or their iPhones, they’re totally floored,” Powell said. “Whether you’re a cattle rancher or a little kid or the CEO of PepsiCo, that’s universally mind-blowing.” 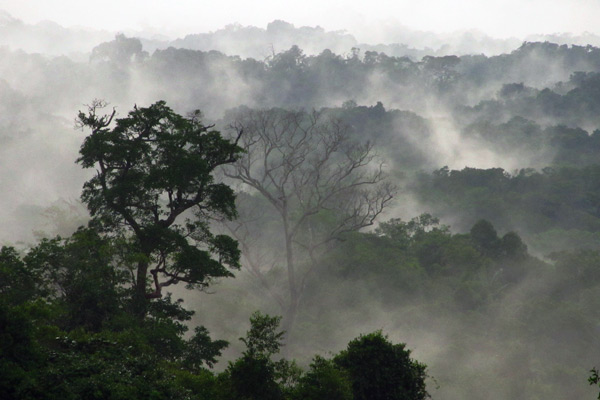 A misty morning in the Amazon rainforest, looking out from a canopy platform in the BDFFP. Credit: Gilberto Fernandez.