Japan’s decision to weaken carbon emissions target a ‘slap in the face’ to poor countries.

In 2009, Japan pledged to cut its carbon emissions by 25 percent based on 1990 levels within 11 years. Four years later—including a nuclear meltdown at Fukushima—and Japan has reset its goal with a new target to cut emissions by 3.8 percent based on 2005 levels at the UN Climate Summit in Warsaw, Poland. But, the new target, which received widespread condemnation when announced on Friday, actually results in a 3.1 percent rise in emissions when viewed from the widely-accepted 1990 baseline.

“The new target is based on zero nuclear power in the future. We have to lower our ambition level,” said Hiroshi Minami, Japan’s delegate at the 19th annual Conference of the Parties (COP) to the UN Framework Convention on Climate Change (UNFCCC).

Despite Japan’s nuclear issues, many nations were quick to criticize the world’s third largest economy for backtracking so far.

“The announcement represents a huge step backwards in the global effort to hold warming below the essential 1.5-2 degrees celsius threshold, and puts our populations at great risk,” reads a statement by the Alliance of Small Island States (AOSIS), a group of 44 island-states that are particularly vulnerable to climate change impacts. “This is neither the time nor the place to be backtracking on commitments. Developed countries have committed to taking the lead and must do so as we work to peak global emissions this decade and ink a new global agreement in 2015.” 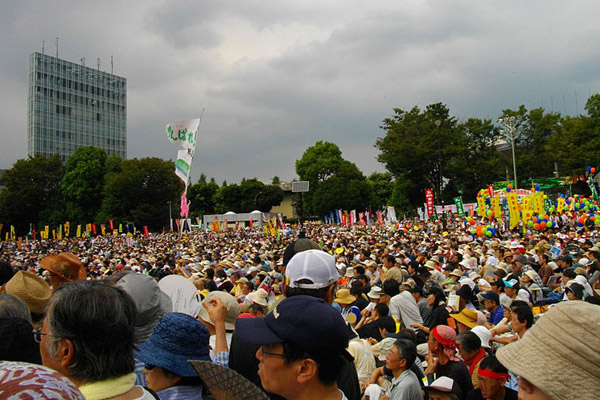 An anti-nuclear power rally in Japan. Photo by: Public Domain.

In fact, an analysis by Climate Action Tracker, a group of independent scientists, found that the closing of Japan’s nuclear power plants couldn’t account fully for the drastic shift in Japan’s pledge. According to them, even if Japan replaced all of its nuclear energy with coal—the world’s most carbon intensive fuel source—the country could still hit a nine percent CO2 emissions reduction by 2020.

Japan is the world fifth largest CO2 emitter and is generally responsible for around 3-4 percent of global CO2 emissions. Until now it has largely been viewed as one of the most ambitious wealthy nations in terms of climate action, but its move on Friday won it the little-coveted Fossil of the Day, an award that goes to the nations viewed as most obstructive at climate talks.

“To add insult to injury [Japan] is trying to hide weak ambition behind strong rhetoric,” writes the Climate Action Network which gives out the ironic awards.

But the strongest condemnation came from Kelly Dent with Oxfam, who called Japan’s new goal “a slap in the face for poor countries who are right now struggling to cope with changes to their climate, and who will face yet more extreme and unpredictable weather in the future.”

Japan’s announcement comes close on the heels after Australia revealed it was also weakening its target. Observers at the meetings say this backtracking by wealthy countries could threaten to undercut progress in Warsaw even as the meeting has been overshadowed by the destruction wrought by Typhoon Haiyan in the Philippines. The Filipino delegate, Naderev ‘Yeb’ Saño, has gone on hunger strike at the meeting until “until a meaningful outcome is in sight.”

Typhoon Haiyan was the most intense tropical storm to make landfall yet recorded. Scientists say climate change is likely to increase the intensity (including both wind speed and rainfall) of tropical storms due to warmer sub-surface seas, and may already be doing so. In addition, rising sea levels means greater storm surges with correspondingly more damages and loss-of-life.

Nations worldwide have pledged to keep global temperatures from rising more than 2 degrees Celsius above pre-industrial levels, but experts say we are moving too slowly to make good on this goal. In recent years, there has been a constant call for nations to make deeper emissions cuts by scientists, UN officials, and the most vulnerable countries.

(11/15/2013) The mighty polar bear has long been the poster child for the effects of global warming in the Arctic, but the microscopic diatom tells an equally powerful story. Diatoms are a type of algae that form the base of the food chain in watery habitats the world over. Disturbances among lake diatoms have exposed the impacts of rapid warming in the Hudson Bay Lowlands of eastern Canada, researchers reported Oct. 9 in the Proceedings of the Royal Society B

(11/12/2013) Yesterday, the Filipino delegate to the ongoing climate summit, Naderev ‘Yeb’ Saño, dared climate change deniers to take a hard look at what’s happening not just in the Philippines, but the whole world. Over the weekend, the Philippines was hit by what may have been the largest typhoon to ever make landfall—Typhoon Haiyan. Reports are still coming in days later, but the death toll may rise to over 10,000 with whole cities simply swept away.