For many concerned about climate change, Australia has suddenly become the new Canada. With the election of Tony Abbott as Prime Minister in September, the land down under has taken a sudden U-turn on climate policy, including pushing to end its fledgling carbon emissions program which was only implemented in 2012 and cutting funding for renewable energy. These move come at a time when Australia has just undergone its warmest 12 months on record and suffered from record bushfires.

Abbott, who has expressed skepticism of climate change in the past, put forward legislation this week to end Australia’s landmark carbon pricing. Abbott, who was the head of Australia’s Liberal Party, ran in part on dismantling the carbon pricing program, which sets a price on carbon emissions for the nation’s 300 largest emitters, instead replacing it with what has been dubbed a “direct action plan.”

“No one should be in any doubt—the government is repealing the carbon tax in full,” Abbott said as he introduced the new legislation. “We are doing what we were elected to do. We have said what we mean and we will do what we say—the carbon tax goes. It goes.”

Instead of pricing carbon, the new administration proposes to spend $3.2 billion on lowering its carbon emissions by 5 percent from 2000 levels by 2020. However, several organization have said this would be nowhere near enough funding to hit even that target, including Australia’s own Climate Change Authority. Notably, the Abbott administration has said it intends to abolish the Climate Change Authority.

This week, Climate Action Tracker—a team of independent scientists and experts—evaluated Australia’s new direct action plan and predicted that instead of lowering emissions 5 percent it would actually raise them 12 percent.

The Abbott administration has also announced it will not commit to any deeper cuts by 2020 unless the international community sets binding international commitments. Prior to this, Australia had pledged to cut emissions by 5-25 percent by 2020 from 2000 levels. According to the UN, Australia’s emissions rose by 16.4 percent from 2000 to 2011, not including emissions from landuse.

“We accept that climate change happens, that mankind, humanity, makes a contribution to it and it’s important that we take strong and effective action against it,” Abbott said prior to introducing the legislation to kill Australia’s carbon pricing. “We will meet our 5 per cent emissions reduction target but this government has made no commitments to go further than that and we certainly want to get emissions down as far as we reasonably can. But we are certainly in no way looking to make further binding commitments in the absence of very serious like-binding commitments in other countries and there’s no evidence of that.”

Abbott’s new legislation would also slash funding for renewable energy by $435 million under its Australian Renewable Energy Agency (ARENA). An additional $370 million will be deferred until the next decade.

The nation’s new climate stance is also making waves at the UN Climate Summit in Warsaw this week. Even before the summit started, Australia announced it would not be sending any minister to the meeting, a move that critics viewed as symbolic of the country’s possible lack-of-ambition.

“When it comes to climate change, the Liberals have just been an embarrassment on the world stage,” Mark Butler, Labor’s environment spokesman, told Guardian Australia last week. “There’s a reason why the Liberal party won’t send ministerial representation to Warsaw —Tony Abbott doesn’t accept that climate change is real.”

During the first day of the summit, Australia also announced it would not provide any new climate funding for developing nations beyond monies it had already committed. Overall wealthy nations have failed to meet their commitments on the Green Climate Fund, which helps poorer countries adapt and mitigate climate change impacts.

These moves have caused Australia to be awarded three of the first four Fossil of the Day Awards thus far at Warsaw. Ironic awards, the Fossil of Day is given by activists to the nations that do the most to obstruct progress during the summit.

Although Australia’s actions may be losing it some friends in Warsaw this week, its moves were welcomed by Canada, which has been accused of stonewalling and bullying at international climate talks.

“Canada applauds the decision by Prime Minister Abbott to introduce legislation to repeal Australia’s carbon tax,” the Canadian government said in a statement. “The Australian Prime Minister’s decision will be noticed around the world and sends an important message.”

When Canada’s current Prime Minister, Stephen Harper, was elected in 2006, the nation went through a transition, which appears similar to the one Australia may be entering. Once considered one of the more progressive wealthy nations on climate change, Canada has slipped to one of the least. In 2011, Canada pulled out of the Kyoto Protocol and then missed its own targets on cutting carbon emissions. The country has also closed down climate research centers, gagged scientists, and labeled environmentalists as possible domestic terrorists.

Critics say the current Canadian government’s unwavering supported for its vast tar sands industry has overwhelmed its ability to take meaningful climate action with some going so far as to label Canada a new “petrol state.” Although Canada’s carbon dioxide emissions have dropped from a high in 2007, the country’s 2011 emissions are still 111 million tonnes above its 1990 levels, the base year as set by the Kyoto Protocol.

Nations worldwide have committed to keeping global temperatures from rising more than 2 degrees Celsius above pre-industrial levels. If this target is breached, many scientists believe it could unleash catastrophic climate change. However, experts say the world is moving too slowly and with too little ambition to date to meet this pledge. 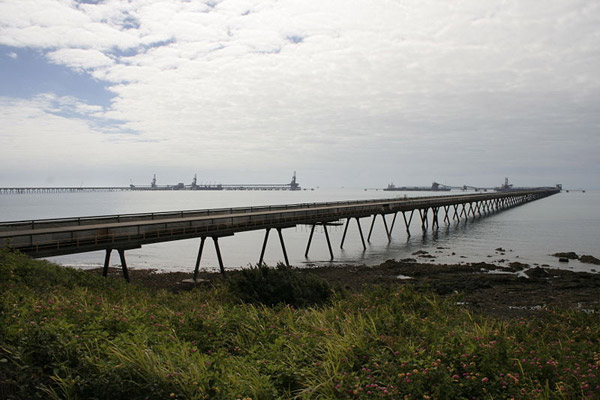 Coal loader at Hay Point terminal in Queensland. The majority of Australia’s coal is shipped and burned abroad, still the nation itself burns coal for around 75 percent of its electricity. Photo by: Grahamec/Creative Commons 3.0

(03/05/2013) In the far southwestern corner of Western Australia, beyond the famed wineries in the shadow of the Margaret River, lies an ecosystem like no other, the South West ecoregion. This part of Australia has been identified as one of 34 global biodiversity hotspots, home to rare endemic flora and fauna like the Carnaby’s black cockatoo, numbat (banded anteaters), woylie (brush-tailed bettong), mainland quokka and over 1500 plant species, most found nowhere else. Unfortunately, this unique habitat is being increasingly fragmented and its inhabitants threatened by a number of forces, including climate change, dieback, fires and logging. And, on the eve of the Western Australia’s state elections, the future of the South West hangs in the balance.