On October 2nd, WWF released camera trap videos of Sumatran rhinos surviving in Kalimantan, Indonesian Borneo. The conservation organization had already announced in April that they had evidence of at least one Sumatran rhino in the province, but the new images confirmed what is likely to be a small surviving population. While this is good news for an animal on the edge of extinction, Erik Meijaard, a researcher who has worked in Indonesia for over 20 years, says WWF has made a mistake publicizing the news around the world, noting “the last thing those rhinos need is publicity.”

“What WWF should have done is keep quiet, lobby in the background for the protection of the forest and the establishment of effective conservation management…Only, when everything was in place to deliver long-term effective management with experienced and preferably well-heeled conservation partners, then WWF could have considered announcing that they had effectively protected the last rhinos of Kalimantan for over 10 years and that the population had boomed,” Meijaard told mongabay.com. “What they are doing now is seeking to fast-track solutions, but such quick solutions do not work in Indonesia. And with a few rhinos in their area, the margin for error is zero.”

Rhino poaching to fuel the black-market trade for the big mammal’s horns has skyrocketed recently. Thousands of rhinos have been killed in the last few years alone across Africa and also in parts of Asia where their populations are much smaller. Meijaard fears that by making this information public, WWF has put the population of Sumatran rhinos hanging on in Kalimantan at risk.

In a press release, WWF says it has set up on-the-ground patrols in the forests where the rhinos survive. 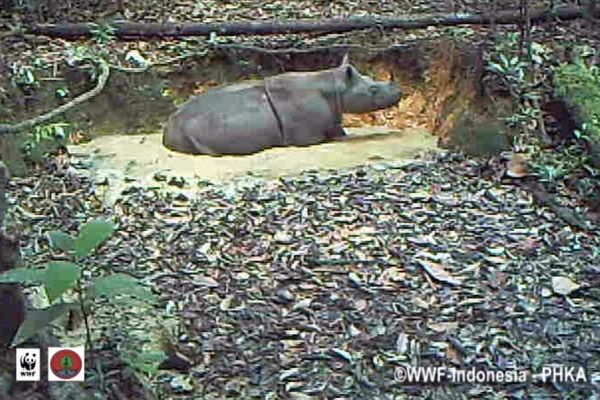 Still from camera trap video of Sumatran rhino in Kalimantan wallowing in a mud hole. Photo by:© WWF-Indonesia/ PHKA.

“A joint monitoring team from the Kutai Barat administration, Rhino Protection Unit, and WWF have been conducting regular patrols around the area,” said Nazir Foead, Conservation Director of WWF-Indonesia. “WWF calls on all parties, in Indonesia and around the world, to immediately join the effort to conserve the Indonesian rhinoceros.”

However, wildlife rangers and consistent patrolling have not stopped rhino poaching in countries like South Africa, Nepal, and Kenya among others.

Sumatran rhinos (Dicerorhinus sumatrensis) are among the world’s most endangered mammals. Scientists have recently estimated that less than 100 exist in the wild with tiny, splintered populations persisting on Sumatra and Borneo. Conservationists are currently attempting to breed rhinos in semi-captive conditions in Sumatra and Sabah (Indonesian Borneo) as well as in the Cincinnati Zoo. Between the three breeding institutions, there are currently ten rhinos.

Not long ago, most conservationists believed the rhinos of Kalimantan were gone for good, however rumors persisted. For centuries, Kalimantan’s rhinos faced relentless hunting, especially by the nomadic forest people in the area, according to Meijaard. However, by the end of the century, the government of Indonesia had resettled these nomadic people into villages, ending their nomadic culture and, unintentionally, regular rhino hunts. According to Meijaard, the reduction in hunting pressure likely allowed the few surviving rhinos to breed and perhaps even increase in population. Still, hunters told Meijaard they killed a rhino in Kalimantan as recently as 2000.

“The problem is that no one in Indonesia, apart possibly from the Ujung Kulon people, have been able to stop rhino poaching,” says Meijaard. 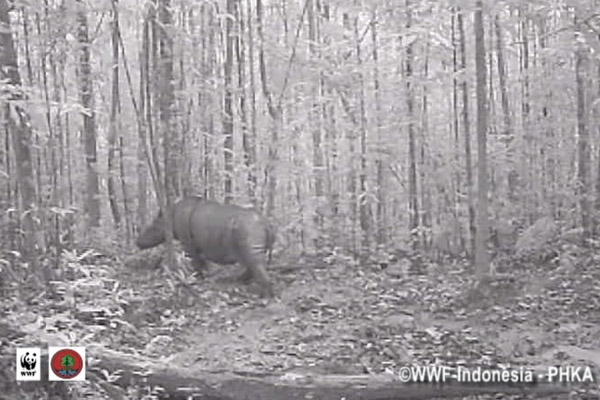 Still from camera trap video of Sumatran rhino in Kalimantan. Photo by:© WWF-Indonesia/PHKA.