Give it a few thousand years, and tusks could completely disappear from the Asian elephant (Elephas maximus). The beautifully smooth, elongated ivory incisors neatly bordering a long trunk are iconic in the public mind. The reigning hypothesis is that tusks evolved to help male elephants fight one another, as demonstrated when males compete over females in estrus. However, a recent study published in the journal Animal Behaviour has shown that tusks may not be key factors in tussles, at least as far as elephants are concerned.

Size seems to matter. Studies of African savannah elephants (Loxodonta Africana) in Amboseli, Kenya, have shown that larger males tend to win jousts, as do those in “musth.” Musth is an intense but temporary sexual state during which a male’s testosterone level shoots up, he starts dribbling pungent urine and secreting a tar-like substance from either side of his head. But the role of tusks during interactions between male elephants has not been determined until this study.

Karpagam Chelliah and Raman Sukumar from the Centre for Ecological Sciences at the Indian Institute of Science, Bangalore, decided to study which factor – tusks, musth or body size – gives fighting male elephants the biggest competitive edge. They needed a population that had all three variables: both tusked and tuskless males, males that come into musth and come out of it, and males of varying sizes. 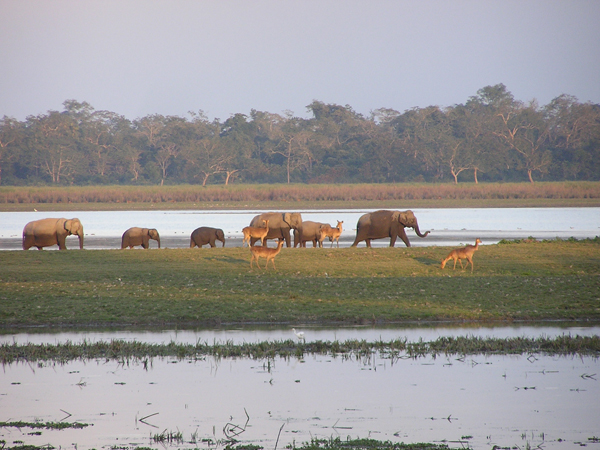 Elephants and swamp deer browse in Kaziranga. You can see the short grass near the river, with taller grass at the fringe of the forest patch. Photo by Karpagam Chelliah.

They found just the population they needed at Kaziranga National Park in the state of Assam in eastern India. In Asian elephants, females do not have tusks and males can be either tusked or tuskless (called “makhnas”). This is unlike the African elephant species, in which all individuals have tusks. The number of makhnas in a population varies from place to place; in Kaziranga, there are approximately equal numbers of tuskers and makhnas among the males.

Situated in the floodplains of the majestic Brahmaputra River and crisscrossed by her tributaries, Kaziranga is rightly called the Serengeti of India. Its large swathes of grassland, patches of tall elephant grass, tropical semi-evergreen forest and water bodies laced with riverine vegetation are home to approximately 1,165 elephants. Come the monsoon, most of the park vanishes underwater.

The researchers spent 458 days at Kaziranga during the dry season over three years, observing elephant activities. They documented the behavior they saw, capturing more than 450 hours of video. Using these videos, they created a photographic database of 132 adult male elephants, differentiating individuals primarily through ear morphology – degree of folding, cuts in the ear margin, holes in the ear and the vein pattern.

To the victor belong the spoils

From the videos, the authors isolated 116 instances where males interacted with each other, sometimes sparring. To understand the context of a particular behavior, they were careful to record entire sessions of interactions – from the time two males were in each other’s vicinities, until the time they separated. They documented different kinds of dominant behavior in males, such as charging, chasing, circular head-shaking and touching each other’s bodies with their trunks. The male that showed submissive behaviors such as freezing, retreating or hiding in tall grass was deemed the “loser,” and the other male the “winner.”

“I did not know what to expect before I headed to Kaziranga, and I was mighty curious,” said first author, Karpagam Chelliah. 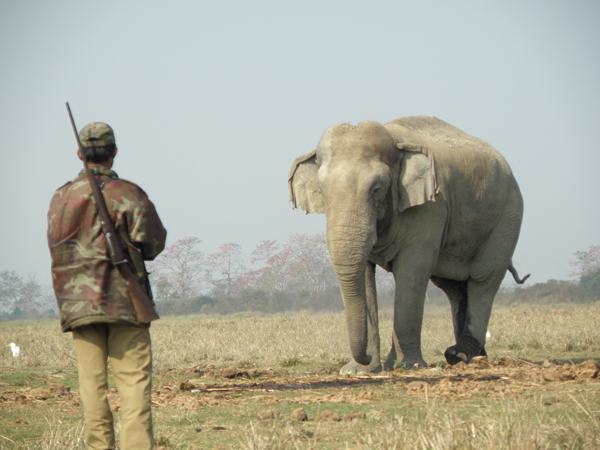 Deepak Saikia, a forest guard at Kaziranga having a “man-to-man chat” with Zero, one of the male musth elephants Chelliah was observing. Chelliah did all her on-foot observations with Saikia, an experienced forest guard who had a real knack for understanding and handling animals with minimal interference, keeping himself (and Chelliah) out of danger. Photo by Karpagam Chelliah.

After three years of suspense while the data were being gathered, the results were categorical. Musth males came out as winners almost every time: out of 86 interactions between males during which at least one was in musth, the musth male won an incredible 84 times – a 98 percent success rate. The verdict was equally dramatic once a male came out of musth.

“Most males turn timid out of musth,” Chelliah told mongabay.com. “There was one old fellow, a makhna, who had just come out of his two month long musth phase; but he still challenged a musth makhna of comparable size. On the first day he did fairly well, but on the second day he lost, and the musth makhna got to mate.” 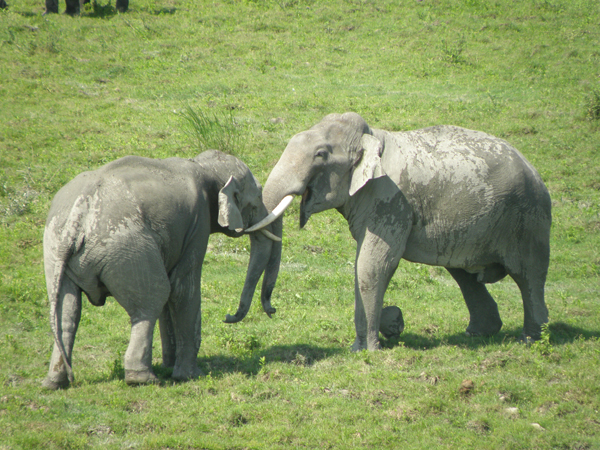 Tusked males did not fare as well as those in musth. Of the 82 documented occasions when one male had a tusk advantage, the tusker won just 54 times – a 66 percent success rate. Tuskers lost to musth males, and to larger males. Apart from musth, the most important factor for competitive advantage is a male’s size. The presence of tusks is significantly less consequential.

“Most of the contests are settled without tactile contact, and physical aggression is almost non-existent among elephants,” said Chelliah. “When musth males win, they don’t even have to fight. Just being in a state of musth is enough – other males retreat on just smelling the musth male. So when majority of the contests are settled without even tactile contact – tusk has hardly a role as a weapon.”

When both jousting males were of similar body size and musth, those with tusks usually won. But such well-matched fighting was rarely observed by the team. Over the entire study period, the authors encountered just seven males with puncture wounds that were presumably due to tusks. The authors reported that most joust-related physical contact between males involved “high-impact head butting and wrestling, more than fencing or goring with tusks.” 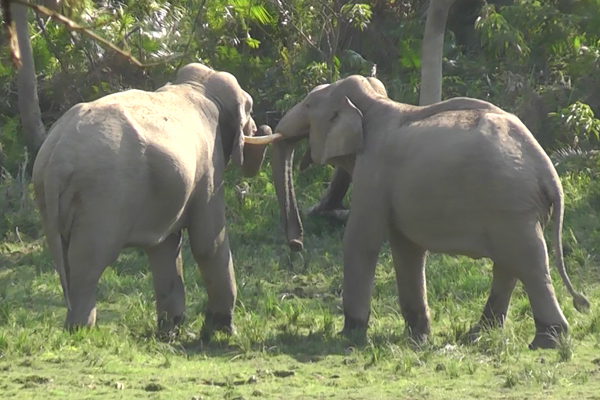 A makhna grabbing a tusker’s tusks during a joust. Makhnas often overpower tuskers in this manner.

“I think the finding that musth overrides body size and size overrides tusk presence is reasonable,” said Julie Hollister Smith, who was not involved in the study but worked on reproductive behavior in African elephants for her PhD at Duke University. “I believe that the fundamental factor in male dominance is size, which is tied directly to age. A male typically grows in size – both height and weight – as he ages, which allows him to remain in musth for longer periods. My findings in the best-studied African elephant population to date, was that the oldest males have the highest reproductive success.” 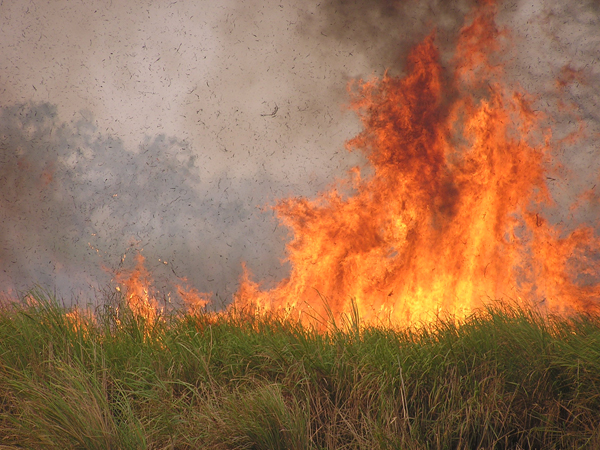 A fire at Kaziranga. The Park practices controlled burning to prevent trees from gradually taking over grassland. The flames can reach up to 40 feet in height and according to Chelliah, “the crackling noise of the fire has to be experienced”. Photo by Karpagam Chelliah.

“I have seen makhnas grab the tusks of a tusker and push,” said Chelliah.

Tusks have long been considered formidable weapons – and not just for the animals themselves. Throughout history, humans have trained elephants for warfare, and even for executions. However, the low tensile strength of ivory meant that tusks were not actually used directly in these activities. Indeed, war elephants are often depicted with armor over their tusks to protect them during combat.

“A Kandyan [Sri Lankan] chief, who was witness to such scenes, has assured us that the elephant never once applied his tusks, but, placing his foot on the prostrate victim, plucked off his limbs in succession by a sudden movement of his trunk,” wrote 19th century traveler James Emerson Tennent in his book Ceylon: An Account of the Island Physical, Historical and Topographical.

Why invest in extra-large teeth?

Some scientists believe tusks play a major role during the elephants’ equivalent of childhood and teenage stages. A juvenile male elephant can potentially use his tusks to intimidate their tuskless peers. This may seem like a minor thing, but remember that elephants are long-lived and social, with excellent memories – a little bullying when young can go a long way during a long life. However, this claim is yet to be investigated.

Another hypothesis speculates that a fine set of tusks can indicate male quality. Previous studies have shown that longer tusks correlate to fewer parasites. Perhaps large, healthy tusks serve as signals, advertising to potential mates that the male is strong enough to fight parasites and diseases during his long, arduous life.

“In elephants, I suspect that tusk could have evolved through male-male combats only if musth evolved much later as a male-male signal,” says Chelliah.

In other words, tusks came first and remained for two possible reasons – competition between younger males, and as a fitness signal to females. With continued poaching pressures, it may so happen that tusked males will be entirely wiped out, and replaced with makhnas. Or perhaps strong female mating preferences will keep them around. Only time will tell.

(10/01/2013) In the Malaysian state of Sabah, where most conservation students are still foreigners—either European or American—Nurzahafarina Othman stands out: not only is she Malaysian, a Muslim, and a mother of a young daughter, but she’s rapidly becoming a top researcher and champion for the world’s smallest elephant: the Bornean elephant (Elephas maximus borneensis). Although sometimes described as a pygmy elephant, they still weigh 2,000 kilograms (4,400 pounds). The origin of these ‘tiny’ elephants in Malaysian Borneo have baffled scientists for decades.