An Australian sailor has described parts of the Pacific Ocean as “dead” because of severe overfishing, with his vessel having to repeatedly swerve debris for thousands of kilometers on a journey from Australia to Japan.

Ivan MacFadyen told of his horror at the severe lack of marine life and copious amounts of rubbish witnessed on a yacht race between Melbourne and Osaka. He recently returned from the trip, which he previously completed 10 years ago.

“In 2003, I caught a fish every day,” he told Guardian Australia. “Ten years later to the day, sailing almost exactly the same course, I caught nothing. It started to strike me the closer we got to Japan that the ocean was dead.

“Normally when you are sailing a yacht, there are one or two pods of dolphins playing by the boat, or sharks, or turtles or whales. There are usually birds feeding by the boat. But there was none of that. I’ve been sailing for 35 years and it’s only when these things aren’t there that you notice them.

MacFadyen said that the lack of ocean life started at the edge of the Great Barrier Reef, describing Queensland waters as “barren” and “unquestionably overfished.”

“We saw a boat come towards us and we thought they might be pirates, but they had bags and bags of fish,” he said. “We said ‘there’s only two of us, we can’t do anything with all that’ and they said ‘don’t worry, just throw it over the side.’

“There was around 100 large fish there. But it was valueless for them because they were after tuna and nothing else. They just trawled the whole ocean and everything other than tuna was bycatch.” 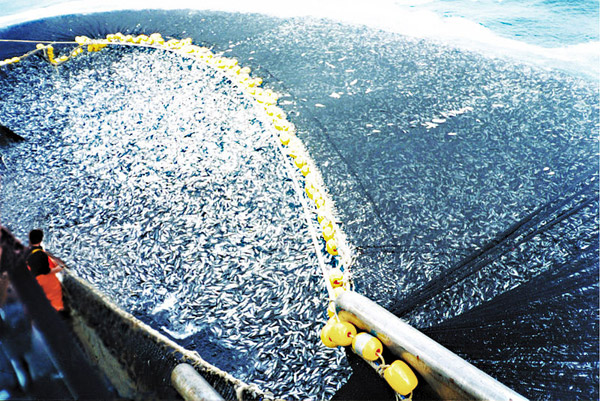 Hundreds of tons of jack mackerel (Trachurus murphyi) are caught by a purse seiner in 1997. Photo by: C. Ortiz Rojas.

For the majority of the voyage to Japan, MacFadyen had to ensure that his yacht wasn’t holed by clumps of rubbish he said were “as large as a house.”

“There were fenders from ships, balls of net and telegraph poles with barnacles on them that were never going to sink,” he said. “There was nothing like that 10 years ago. I couldn’t believe it.

“We wouldn’t motor the boat at night due to the fear of something wrapping around the propeller. We’d only do that during the day with someone on lookout for garbage. When you stood on the deck and looked down you’d see the rubbish shimmering in the depths below, up to 20 meters under the water.

“We went onto the US and back again. We did 23,000 miles [37,000km] and I’d say 7,000 of those were in garbage. The boat is still damaged from it. We had to free the rudder of rubbish one night, which was scary. We were terrified of something ripping a hole in the boat.”

MacFadyen said that the trip had made him “very cranky” and has inspired him to encourage better monitoring of ocean rubbish to ensure governments’ anti-pollution policies are working.

“Humans are such a blight on the planet that we will just trash an area because it is out of sight most of the time,” he said. “It completely changed the way I look at things. I used to chuck rubbish away without thinking twice but there’s no way I will do that now.”

According to marine conservationists, overfishing is a global problem affecting nearly 90% of the world’s fisheries.

The problem has resulted on catch quotas being placed on many species of fish, although the exact extent of overfishing in Australia is slightly unclear.

Government fisheries data shows only bluefin tuna and the school shark are dangerously overfished in Australian waters. However, the Australian Marine Conservation Society’s guide to sustainable seafood places 26 species—including kingfish, snapper and tiger prawns—on a “red list” that should not be consumed due to their fragile status.

Pamela Allen, marine campaigner at the Australian Marine Conservation Society, told Guardian Australia that there have been improvements in Australian fisheries in recent years but problems remain.

“The quota for bluefin tuna has just been increased by 10%, despite there being no evidence to justify this,” she said. “There are also issues in state fisheries—Queensland has no scientific observer system, for instance, and rely just on fishers’ logbooks for what they catch in sensitive areas such as the Great Barrier Reef.

“Trawling the ocean results in a high level of bycatch because it’s hard to be exact with what you’re catching when you’re dragging a gigantic net along the sea floor.

“People don’t realise that flake is shark and that sharks are threatened due to overfishing. There is no single sustainable source of shark in fisheries. Consumers have a choice every day to make a small difference.

“Fish is one of the last wild foods we eat, along with mushrooms, and we have to realise that once it has gone, it is gone. Governments and fishers are making some changes but they need to move more quickly or there won’t be any fish left.”

A new way to measure the ocean’s health

(10/23/2012) A diverse array of institutions have come together to release a new, revolutionary ocean health assessment called the “Ocean Health Index.” Researchers formed the index in order to gauge the health of the world’s oceans. The index is the result of a huge collaborative effort, including top researchers crossing a diverse range of disciplines such as the National Center for Ecological Analysis and Synthesis (NCEAS) and Conservation International.