The production and trade in ‘sustainable’ timber products in Southeast Asia is mostly ‘a mirage’ due to questionable forestry practices and loopholes in import regulations, alleges a new report from Friends of the Earth International.

The report, ‘Sustainable’ tropical timber production, trade and procurement’, focuses on logging in Malaysia and timber import laws in Japan, South Korea, and Australia. It says declining timber production in Malaysia shows that current management practices are inherently unsustainable, depleting future generations of natural resources. Worse is the environmental damage being wrought to the region’s rich forests and the deprivations suffered by indigenous communities, especially in the state of Sarawak, where forest dwellers have been forced off their traditional lands.

“We are witnessing a global depletion of natural timber resources and sustainable tropical timber remains essentially a mirage,” said Meenakshi Raman, Honorary Secretary of Friends of the Earth Malaysia, in a statement.

While several key importing nations seem to have in place regulations that would protect against such abuses, the report argues they have have not “resulted in meaningful changes on the ground”. A chief issue has been a focus on legality of timber supplies, rather than safeguarding human rights or ensuring sustainability.

“A disproportionate amount of emphasis seems to have been focused on eliminating the trade of illegal timber, at the expense of the efforts to ensure the sustainable production and consumption of tropical timber products,” states the report. “Consumer countries have also failed to reduce their tropical timber consumption levels to more sustainable levels.” 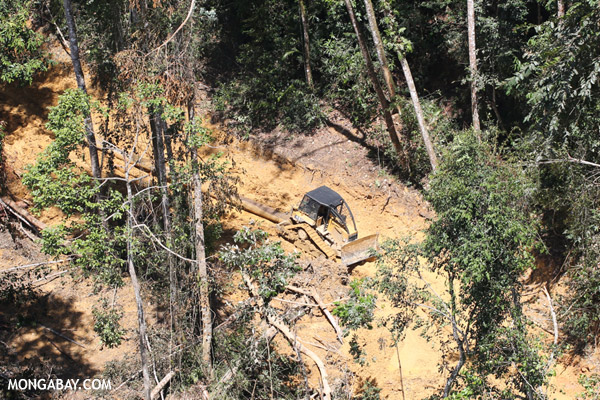 The report urges policymakers in consuming countries to adopt policies that move beyond a strict focus on legality by incorporating human rights, good governance, and environmental performance into their regulatory frameworks for timber and wood products imports. Accordingly, Friends of the Earth International lays out what it views would be a good definition for “legal and sustainable” timber from Malaysia as well as specific recommendations for strengthening import policies for Japan, South Korea, and Australia.

“For policy to be able to address the reality on the ground, it cannot afford to ignore systemic corruption, the violations of human rights as well as unsustainable production and consumption patterns,” says the report. “Policy has to be fully grounded on governance transparency and a real understanding on the ecology of natural resources as well as the human lives it affects.”

CITATION Friends of the Earth (2013). From policy to reality: ‘Sustainable’ tropical timber production, trade and procurement.

(10/01/2013) Indonesian and the European Union signed a deal on Monday that aims to curb illegal logging by ending all trade in illegal wood products between Asia’s largest exporter of timber to Europe and each of the EU’s 28 member states.