The Banda Aceh court on Thursday sentenced Chief Sgt. Joko Rianto to two months in prison and a 5 million rupiah ($454) fine. Chief Pvt. Rawali was handed a three-month jail term and a fine of 2.5 million rupiah. The two men were found guilty of violating sections of a law on biodiversity and ecosystem conservation. Their crimes carry a maximum sentence of five years in jail and a fine of 100 million rupiah.

According to Judge Budi Parnomo, who handed down the verdict, Joko said he was keeping the taxidermied animals because having sun bear claws and a tiger skin in his house was helping to cure his sick wife. Rawali, meanwhile, claimed he was keeping the second stuffed tiger as collateral from a friend who had borrowed 9 million rupiah.

Despite the explanations given by the men, Budi said they had still broken the law by keeping the protected animals and had to be convicted. “If we hadn’t prosecuted them, later other people may have followed their example, which would lead to the extinction of protected Sumatran tigers,” Budi said, as quoted in The Globe Journal, a Banda Aceh newspaper. 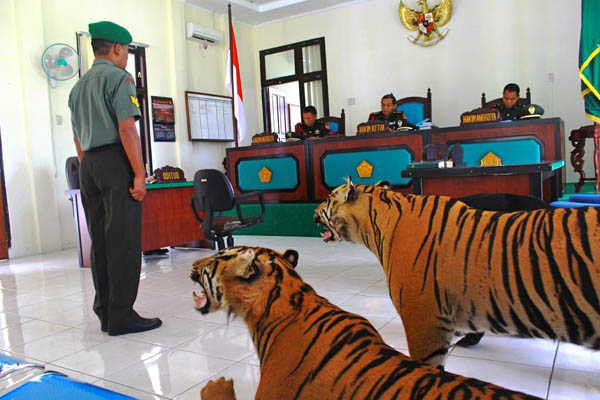 Trial of two accused soldiers in Aceh Military Court, who found to have offset the tiger and bears. Photo: Yusriadi

Sumatran tigers are listed as critically endangered on the IUCN’s Red List, and WWF estimates fewer than 400 are left in the wild. They are severely threatened by both poaching and habitat loss in Indonesia, and killing, keeping, or trading tigers or their parts is prohibited under Indonesian law.

Endangered species activists in Aceh have welcomed the ruling as a rare successful prosecution in a case involving the illegal possession of wildlife, although they acknowledged that the weak sentence was still far from what would be needed to create a deterrent against future wildlife crimes.

Azhar, a species coordinator for WWF-Indonesia’s Aceh Program office, said the group has welcomed the military court ruling but has also asked law enforcement officers to increase patrols to prevent tiger poaching in Aceh, as poaching and trafficking of illegal animal parts remains a big problem in the province.

According to Azhar, Central Aceh, where the two soldiers were stationed, is a major center for Sumatran tiger poaching and the illegal trade of taxidermied animals in Aceh.

“The demand is quite high among collectors,” Azhar told Mongabay-Indonesia on Friday. “And in Central Aceh and Bener Meriah [districts], members of the security forces and government officials have become part of the supply chain for stuffed tigers.”

Despite being a hub for tiger poaching, cases involving tiger killings or the trafficking in tiger parts in Aceh are seldom brought to court. In October 2012, residents of a village in Aceh’s Bener Meriah district killed a tiger after it was caught in a snare in a nearby coffee plantation. The tiger’s skin and head were later brought to local police who have since examined eyewitnesses, however the case has still not gone forward.

Ratno Sugito, an activist from the Aceh Orangutan Forum (Fora), said that, while Thursday’s verdict was far from what activists had hoped for, the military court still took the case more seriously than the Aceh Natural Resources Conservation Agency (BKSDA), a government agency responsible for protecting endangered animals. “The BKSDA [in Aceh] has so far not yet brought one case to trial,” Ratno told Mongabay-Indonesia.