China’s largest city and one of the world’s biggest, Shanghai, is set to ban coal burning in just four years, according to a new Clean Air Action Plan. The city-wide ban on coal burning is one effort among many to get Shanghai’s infamous smog under control as well as another sign that China has begun to take its pollution problems more seriously.

The ban will require the city’s 2,500 coal boilers and 300 industrial furnaces to either shut down or shift to cleaner energy by 2015.

“The frequency of heavy pollution will be significantly reduced by 2017. The air quality will better meet residents’ expectations as well as the general qualifications of building an international metropolis,” Wu Qizhou, deputy director of the Shanghai Environmental Protection Bureau, said as reported by the China Daily.

The plan is a part of a major initiative by the Chinese government to reign in life-threatening pollution across the country, which has marred many of the nation’s economic gains and undercut quality of life. Shanghai has pledged to cut particulate matter 2.5 microns or less (i.e. many air pollutants) by 20 percent by 2017 based on levels from last year. Shanghai is not alone in such goals: in August, the Chinese government announced it would spend $275 billion to combat pollution in its biggest metropolises.

Burning coal spreads toxins into the air and water such as mercury, uranium, and arsenic, in addition to sulfur emissions which can lead to acid rain. The World Health Organization recently declared a definitive link between air pollution and lung cancer.

Currently, China is the world’s largest consumer of coal and the biggest emitter of greenhouse gases. Coal is the most carbon-intensive of fuel sources, and scientists have long warned that the world needs to quickly forgo coal as an energy source in order to avoid catastrophic climate change. Despite this, global coal consumption continues to rise, now largely driven by countries like China and India. 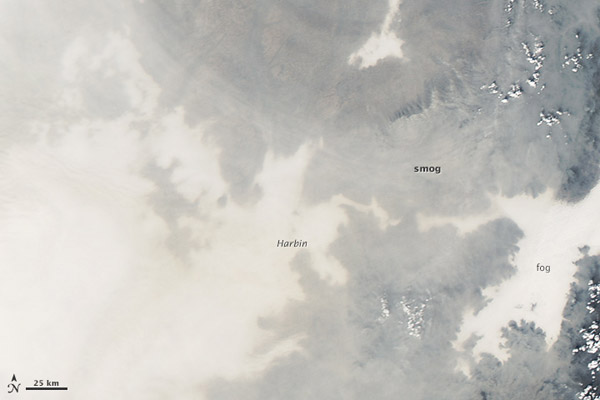 Satellite image of smog over Harbin, China on October 20th. The smog was so bad it shut most of the city down. Photo by: NASA.