Scientists have for the first time found dangerous levels of radioactivity and salinity at a shale gas waste disposal site that could contaminate drinking water. If the UK follows in the steps of the US “shale gas revolution”, it should impose regulations to stop such radioactive buildup, they said.

The Duke University study, published on Wednesday, examined the water discharged from Josephine Brine Treatment Facility into Blacklick Creek, which feeds into a water source for western Pennsylvania cities, including Pittsburgh. Scientists took samples upstream and downstream from the treatment facility over a two-year period, with the last sample taken in June this year.

Elevated levels of chloride and bromide, combined with strontium, radium, oxygen, and hydrogen isotopic compositions, are present in the Marcellus shale wastewaters, the study found.

Radioactive brine is naturally occurring in shale rock and contaminates wastewater during hydraulic fracturing – known as fracking. Sometimes that “flowback” water is re-injected into rock deep underground, a practice that can cause seismic disturbances, but often it is treated before being discharged into watercourses. 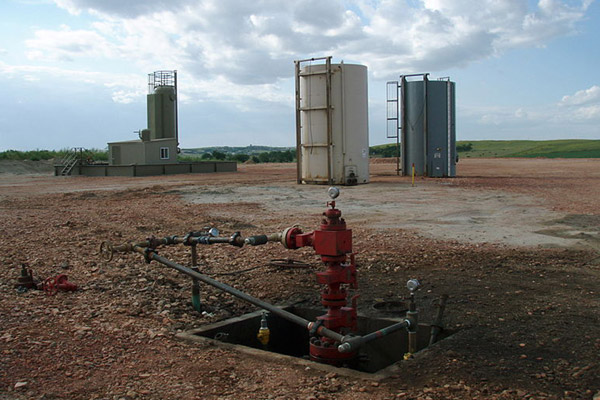 Radium levels in samples collected at the facility were 200 times greater than samples taken upstream. Such elevated levels of radioactivity are above regulated levels and would normally be seen at licensed radioactive disposal facilities, according to the scientists at Duke University’s Nicholas school of the environment in North Carolina.

Hundreds of disposal sites for wastewater could be similarly affected, said Professor Avner Vengosh, one of the authors of the study published in Environmental Science & Technology, a peer-reviewed journal.

“If people don’t live in those places, it’s not an immediate threat in terms of radioactivity,” said Vengosh. “However, there’s the danger of slow bio-accumulation of the radium. It will eventually end up in fish and that is a biological danger.”

Shale gas production is exempt from the Clean Water Act and the industry has pledged to self-monitor its waste production to avoid regulatory oversight.

However, the study clearly showed the need for independent monitoring and regulation, said Vengosh.

“What is happening is the direct result of a lack of any regulation. If the Clean Water Act was applied in 2005 when the shale gas boom started this would have been prevented.

“In the UK, if shale gas is going to develop, it should not follow the American example and should impose environmental regulation to prevent this kind of radioactive buildup.”

The study also found elevated levels of salinity from the shale brine, which is five to 10 times more saline than sea water, that were 200-fold the regulated limit. Shale brine is also associated with high levels of bromide, which is not toxic by itself but turns into carcinogenic trihalomethanes during purification treatment.

The US Geological Service has previously reported elevated levels of radioactivity in “flowback” water that naturally occurs in the rock. But the Duke study, called Impacts of Shale Gas Wastewater Disposal on Water Quality in Western Pennsylvania, is the first to use isotope hydrology to connect the dots between shale gas waste, treatment sites and discharge into drinking water supplies.

From January to June 2013, the 4,197 unconventional gas wells in Pennsylvania reported 3.5m barrels of fluid waste and 10.7m barrels of “produced” fluid. Most of that waste is disposed of within Pennsylvania, but some of it is also went to other states, such as Ohio and New York despite its moratorium on shale gas exploration. In July, a treatment company in New York state pleaded guilty to falsifying more than 3,000 water tests.

Earlier this year, Vengosh published another report that found higher methane, ethane and propane concentrations in drinking water within a kilometer of shale gas drilling at 141 sites where drinking water samples were taken.

(08/15/2013) Beverly McGuire saw the warning signs before the town well went dry: sand in the toilet bowl, the sputter of air in the tap, a pump working overtime to no effect. But it still did not prepare her for the night last month when she turned on the tap and discovered the tiny town where she had made her home for 35 years was out of water.