In what is being described by Greenpeace as an ‘imaginary offense,’ Russia has charged 30 people with piracy after activists protested against oil exploitation in the Arctic. The 30 charged included not only protestors, but a British journalist and Russian videographer who were on board Greenpeace’s ship, the Arctic Sunrise, when it was stormed by the Russian military late last month.

On Wednesday, September 18th, two of activists were arrested attempting to scale Russia first Arctic oil platform, Prirazlomnaya, owned by oil giant, Gazprom. The following day the Russian military stormed the Arctic Sunrise from helicopters in international waters, arresting everyone on board.

“A charge of piracy is being laid against men and women whose only crime is to be possessed of a conscience,” executive director of Greenpeace, Kumi Naidoo, said. “This is an outrage and represents nothing less than an assault on the very principle of peaceful protest. Any claim that these activists are pirates is as absurd as it is abominable.”

On Friday, the Dutch government stated it would start arbitration against Russia under the UN Convention of the Law of the Sea to immediately release the 30 prisoners and the ship, which has been impounded by Russian authorities. 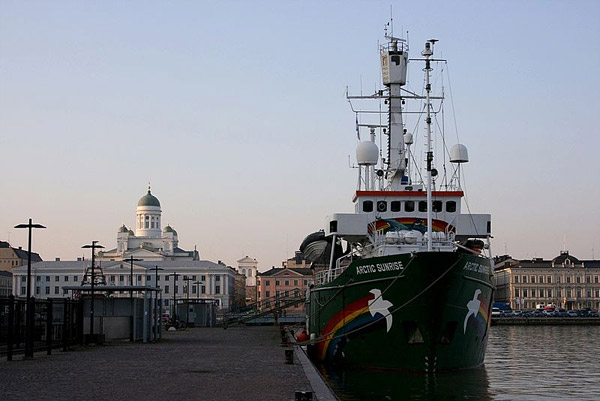 The Arctic Sunrise in Helsinki, Finland. Photo by: Rozpravka/Creative Commons 3.0.

Russian President, Vladimir Putin, has said that protestors were not pirates, but may have broken international law. However, all 30—who come from 18 countries—have been charged with “piracy of an organized group” and could face up to 15 years in jail if convicted.

Naidoo added, “Our activists have been charged with a crime that did not happen, they are accused of an imaginary offense.”

On Saturday, protests occurred at several Russian embassies worldwide calling on the country to release the prisoners.

Russia has been cracking down on protestors recently. Last year, the country was widely criticized abroad for sentencing two members of the music group, Pussy Patrol, to prison for a protest they staged at a Moscow Cathedral. The pair were charged with ‘hooliganism motivated by religious hatred,’ and were sentenced to two years in prison.

Greenpeace has been protesting plans to drill for oil in the Arctic since 2012, warning that drilling in such extreme conditions could lead to an unparalleled environmental disaster. Currently, no company has successfully drilled for oil in the deep Arctic Ocean. For example, after a series of high-profile failures last year, Shell has put its plans to drill in the Arctic on ice, even though the company has spent over $4 billion in an attempt to exploit oil deposits in the Chukchi and Bering Seas.

In its oppositions to companies like Shell and Gazprom, Greenpeace has also consistently made the point that exploiting energy reserves in the Arctic will only exacerbate climate change, which is already rapidly transforming the fragile region.

“This threat affects us all. In my home country of South Africa we are now facing a far more dangerous climate because companies like Gazprom and Shell are pumping money into politics and blocking clean alternatives so that they can extract the last drops of oil left,” Naidoo said last year after he made an attempt to scale Gazprom’s oil rig, similar to the one undertaken this year.

In the most recent climate report by the Intergovernmental Panel on Climate Change (IPCC), scientists pointed out for the first time that the world could only emit around 800 gigatons of carbon in order to ensure meeting its goal of keeping global temperatures from rising above 2 degrees Celsius. As of 2011, global society has already emitted over 530 gigatons. This means that many of the world’s remaining fossil fuel deposits will have to be left untouched, if governments are seriously about tackling climate change.

The 30 prisoners are currently being held in Murmansk, Russia, awaiting trial.

(01/10/2013) A coalition of 17 conservation groups are calling on the Obama Administration to suspend offshore oil and gas drilling in the Arctic after Shell’s attempt to drill there has been undermined by a series of mishaps. Shell’s long stream of problems was capped this month when the company lost control of its drilling rig which ran aground on Sitkalidak Island in southern Alaska. Officials have now warned that up to 272 gallons of diesel fuel may have spilled from the rig’s lifeboats.

(01/02/2013) On Monday night, an oil drilling rig owned by Dutch Royal Shell ran aground on Sitkalidak Island in southern Alaska, prompting fears of an oil spill. As of yesterday no oil was seen leaking from the rig according to the Coast Guard, but efforts to secure the rig have floundered due to extreme weather. The rig, dubbed Kulluk, contains over 140,000 gallons of diesel fuel.