Recovering forests ‘heal’ themselves by speeding up nitrogen fixation

by Mrinalini Erkenswick Watsa on 8 October 2013

Nitrogen is colorless, odorless and tasteless, but all life on earth depends on it. Without it, our bodies cannot synthesize the nucleic acids that make up our DNA, or the protein-forming amino acids that are the very building blocks of our cells. Problematically, atmospheric nitrogen is relatively inert or nonreactive. This has created a unique biological dependency on a process called nitrogen fixation—where inert nitrogen from the atmosphere is converted into more reactive ammonia, a major component of soil fertilizers. A recent discovery has revealed just how reliant recovering forests are on nitrogen fixation, and how some forests can even manipulate it to speed up their abilities to ‘heal’ themselves. Many tropical forests today have been exploited for agriculture, mining, fossil fuel exploitation, and other human use.

“It is therefore crucial to resolve whether nitrogen-fixing trees can relieve nitrogen limitation and ensure fixation as an ecosystem service during tropical forest secondary succession,” writes Sarah Batterman of Princeton University in a recent article published in the journal Nature.

A coalition of researchers from several institutions—Princeton University, the Smithsonian Tropical Research Institute, Wageningen University in the Netherlands, the University of Copenhagen in Denmark, Yale University, and the German Center for Integrative Biodiversity Research—set out to investigate the role played by nitrogen-fixing trees in tropical forest recovery. They chose to study forest plots in Panama, under the auspices of the Agua Salud Project that oversees the management of the watershed that supplies the Panama Canal. 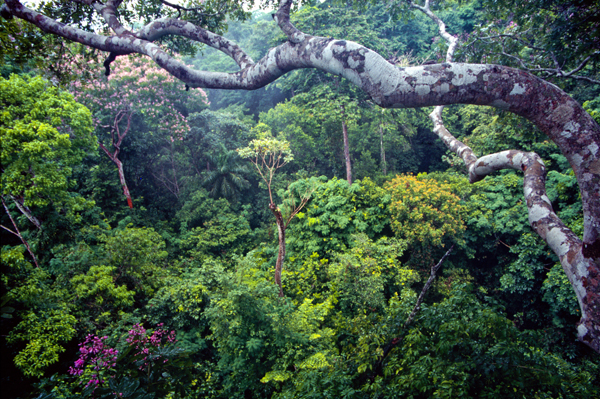 First, they estimated the biomass of the trees in a forest plot and the proportion of each plant’s biomass that was present in its roots, leaves or stems. Using known root and stem (or wood) nitrogen levels, they calculated how much of the tree’s biomass consisted of nitrogen. In the case of leaves, which are the most individually variable components of any plant, coauthor Dylan Craven of Yale University assessed the average nitrogen levels present in the leaves of over fifty species of tropical Panamanian plants.

Subsequently, the researchers also measured nitrogen fixation in individual trees in each forest plot by counting the number of leguminous nodules present on tree roots, which have a symbiotic relationship with nitrogen-fixing bacteria. They then measured how quickly the bacteria in these nodules could fix nitrogen. 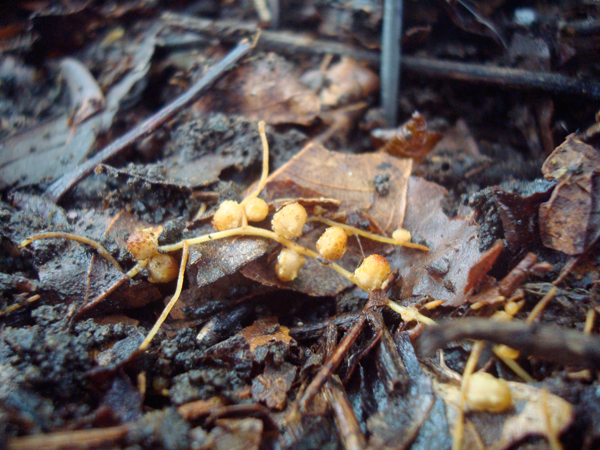 Symbiotic root nodules where nitrogen fixation occurs. This powerful process is accomplished by bacteria that live in the nodules, take nitrogen gas from the atmosphere, and turn it into nitrogen fertilizer for the tree. Photo by Sarah A. Batterman, Princeton University.

Armed with these data, the scientists compared plots that had been abandoned from pasture five, twelve, thirty, and eighty years ago, against 300-year-old mature forests. Since all forest plots came from the same watershed area, they were each assumed to have equal opportunity to recruit trees from an identical pool of species. What the scientists discovered is nothing short of incredible.

View of a mixed landscape near the Agua Salud Project in Panama, including mature forest and forest in different stages of secondary succession where nitrogen fixation supports forest carbon recovery. Photo by Sarah A. Batterman, Princeton University.

Young forests recovering from agricultural land use demonstrated exceptionally high rates of biomass accumulation, with twelve-year-old forests containing as much as 40% of the carbon present in the 300-year-old mature forests.
“We found that during the period when forests are recovering very rapidly, typically in the first two decades, they have a really high nitrogen demand,” Batterman told mongabay.com.

This demand far outweighs the naturally occurring nitrogen in the soils, so forests must seek nitrogen elsewhere for growth. The highest rates of nitrogen fixation coincided with this period of rapid plant biomass accumulation, implying that nodulation and increased bacterial nitrogen fixation were induced because of the high demand for nitrogen.

At the community level, the percent of total forest area represented by fixers peaked at 12 years, then decreased by 80 years after disturbance.

“These findings show that symbiotic nitrogen fixation can have a central role in nitrogen cycling during tropical forest stand development, with potentially important implications for the ability of tropical forests to sequester carbon dioxide,” the authors assert.

The implications of this discovery are far-reaching, but center on a simple fact—in today’s world of rising temperatures from increased carbon dioxide levels in the atmosphere, fast-growing trees that can sequester large amounts of carbon dioxide are a boon to ecosystem survival. Batterman recommends that reforestation projects preferentially use nitrogen-fixing trees to stimulate forest recovery, although she does not recommend using non-native species for this purpose.

The ability of tropical forests to increase nitrogen fixation in times of need has implications for the tropical forest carbon sink. Batterman and colleagues are now setting out to answer an important question: Will tropical forests respond to climate change by growing bigger trees that store more carbon?

(08/12/2013) Around twelve thousand of years ago, the Amazon was home to a menagerie of giant creatures: the heavily armored glyptodons, the elephant-sized ground sloth, and the rhino-like toxodons among others. But by 10,000 B.C. these monsters were largely gone, possibly due to overhunting by humans or climatic changes. There’s no question that the rapid extinction of these megafauna changed the environment, but a new study in Nature Geoscience posits a novel theory: did the mass extinction of big mammals lead to nutrient deficiency, especially of nitrogen, in parts of the Amazon rainforest?

(11/09/2009) There have been numerous studies showing how climate change is impacting a variety of environments—from the Arctic to coral reefs to alpine—but how could a warmer world damage deserts, already the world’s warmest and driest environments?

(06/04/2009) The burning of fossil fuels has disrupted the nitrogen cycle by altering that amount of nitrogen in the biosphere, according to scientists from Brown University and the University of Washington. It has long been known that fossil fuel combustion releases nitric oxides into the air—which combine with other elements to form both smog and acid rain—but until now scientists have been unsure as to the extent nitric oxide emissions have affected the natural nitrogen cycle.

(05/15/2008) Nitrogen pollution of the world’s oceans is harming marine ecosystems and contributing to global warming, report two reviews published in the journal Science.