Over 100 scientists have issued a statement to the Ecuadorian Congress warning that proposed oil development and accompanying roads in Yasuni National Park will degrade its “extraordinary biodiversity.” The statement by a group dubbed the Scientists Concerned for Yasuni outlines in detail how the park is not only likely the most biodiverse ecosystems in the western hemisphere, but in the entire world. Despite this, the Ecuadorian government has recently given the go-ahead to plans to drill for oil in Yasuni’s Ishpingo-Tambococha-Tiputini (ITT) blocs, one of most remote areas in the Amazon rainforest.

“Yasuni National Park may very well be the most biodiverse place in the world,” said Shawn McCracken of Texas State University. “It is a remarkable convergence of global peak diversity levels of amphibian, bird, insect, mammal, and tree species.”

A landmark paper in 2010 outlined the stunning biodiversity found in Yasuni, which scientists believe is due to the collision of Amazonian and Andean ecosystems on the equator. To date, scientists have recorded 153 species of amphibians in the park—a world record for any landscape—and nearly 600 species of bird. In addition, scientists have recorded 183 species of mammals so far, over 100 of which are bats—more bats than found anywhere else in the world. Moreover the park holds the world record for the most woody plants. And that’s not even all.

“A single hectare of forest in Yasuni National Park is estimated to contain at least 100,000 arthropod species, approximately the same number of insect species as is found throughout all of North America,” the scientists write in the statement. “This represents the highest estimated biodiversity per unit area in the world for any taxonomic group.”

For several years, Ecuador had proposed to suspend drilling plans in the ITT blocs of Yasuni National Park, if the international community compensated it for half the expected revenue, i.e. $3.6 billion. The so-called Yasuni-ITT Initiative was seen as ground-breaking by many environmentalists, but when the revenue didn’t come fast enough—and some donors balked at details in the plan—Ecuador’s President Rafael Correa announced he was giving up the idea. At the same time, August of this year, he announced oil exploration would begin quickly in ITT.

“The real dilemma is this: do we protect 100% of the Yasuni and have no resources to meet the urgent needs of our people, or do we save 99% of it and have $18 billion to defeat poverty?” Correa said in August.

This announcement spurred the Scientists Concerned for Yasuni to take action once again.

“The campaign is much direr this time because the government drilling plans are much more extensive than in years past,” explains Matt Finer of the Center for International Environmental Law. “They are not nibbling around the edges of the park anymore, but going deep into the core of one of the most important protected areas in the world.”

The group says that in order to safeguard the park, the Ecuadorean congress must not allow oil exploration or development inside the park and “particularly in the remote and relatively intact Block 31 and ITT Block.” THe government should also build no new roads or access routes inside the park or its buffer zone, and finally a corridor should be establish between Yasuni National Park and Cuyabeno Wildlife Reserve.

“Together with the Peruvian reserves, [this] would form a trans-boundary mega-reserve with Yasuni National Park at its core,” the statement reads.

Activists against oil drilling in Yasuni have also proposed a national referendum on the issue, given that polls show most of the public is against drilling inside the park. To get the issue on the ballot, activists would need to collect around half a million signatures (or 5 percent of Ecuador’s population).

“Yasuni represents the possibility of protecting populations of as many as 10% of all the species on the planet,” said Kelly Swing, Director of the Tiputini Biodiversity Station inside Yasuni National Park. “Tiny Ecuador could thereby be seen as absolute world heroes for conservation.”

The situation is further complicated by the fact that the forests of Yasuni are not only home to more concentrated species than anywhere else on Earth, but also to a number of indigenous tribes, some of whom have chosen voluntarily isolation.

“Countless future generations will not understand why we carelessly destroyed the most biologically diverse areas of our planet, nor why we destroyed the indigenous cultures of people who lived in them,” says Stuart Pimm of Duke University.

One of nearly 200 mammals found in Yasuni: the Brazilian tapir. Photo by: Jeremy Hance. 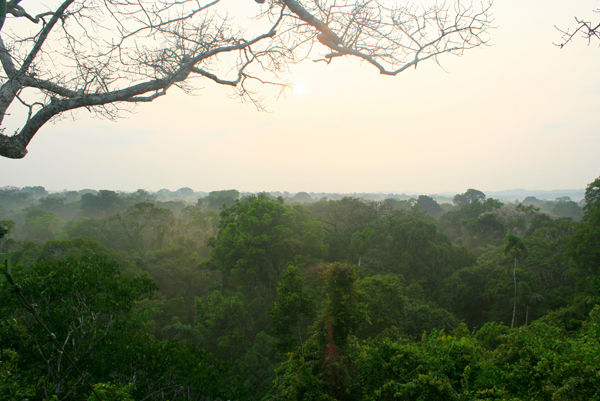 (09/04/2013) Data released this week by Terra-i, a collaborative mapping initiative, shows that deforestation in Ecuador for the first three months of 2013 was pacing more than 300 percent ahead of last year’s rate. The report comes shortly after Ecuadorean President Rafael Correa killed off a proposed plan to prohibit oil drilling in Yasuni National Park in exchange for payments equivalent to half the value of the park’s unexploited oil.