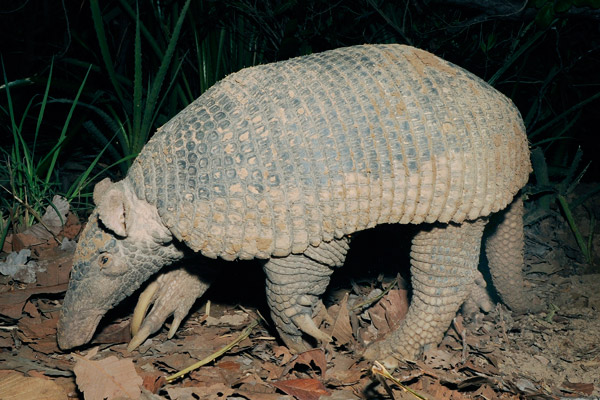 The giant armadillo (Priodontes maximus) is not called a giant for nothing: it weighs as much as a large dog and grows longer than the world’s biggest tortoise. However, despite its gigantism, many people in its range—from the Amazon to the Pantanal—don’t even know it exists or believe it to be more mythology than reality. This is a rare megafauna that has long eluded not only scientific study, but even basic human attention. However, undertaking the world’s first long-term study of giant armadillos has allowed intrepid biologist, Arnaud Desbiez, to uncovered a wealth of new information about these cryptic creatures. Not only has Desbiez documented giant armadillo reproduction for the first time, but has also discovered that these gentle giants create vital habitats for a variety of other species.

“Giant armadillos provide a very valuable ecosystem service to the rest of the ecological community: a shelter form predators and temperature extremes as well as new feeding resources,” Desbiez with the Royal Zoological Society of Scotland, and head of The Pantanal Giant Armadillo Project told mongabay.com.

The shelter he’s referring to is the giant armadillo’s deep burrows, which the busy beasts dig every other day on average. Using claws that any velociraptor would envy—including one that runs up to 17 centimeters (over 6 inches) long—giant armadillos dig out burrows over five meters (16 feet) deep. The armadillos use these burrows for sleeping, resting, and even foraging, since they primarily feed on termites and other invertebrates.

But the burrows have other users too. Employing remote camera traps at 70 different burrows in the Brazilian Pantanal, Desbiez and his team recorded over two dozen species crashing giant armadillo homes for different purposes, from keeping cool to hunting. This makes the giant armadillo an “ecosystem engineer,” i.e. a key species that drastically alters or re-creates its environment, impacting many other species. Well-known ecosystem engineers include beavers, elephants, and, of course, ourselves: humans are the ultimate ecosystem engineer. 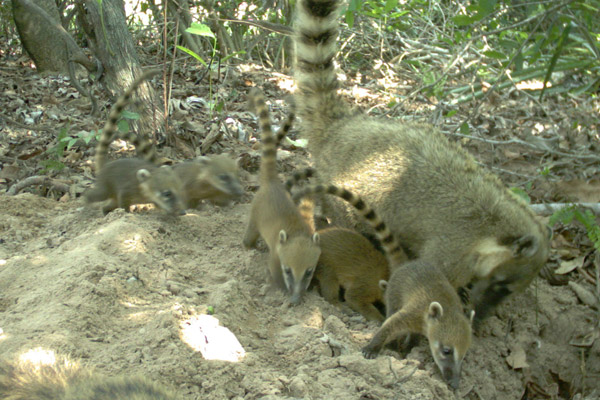 A troop of coati sniffing around the giant armadillo burrow’s sand mound. Photo by: The Pantanal Giant Armadillo Project.

According to Desbiez’s new study in Biotropica, ocelots, crab-eating fox, various lizards, tortoises, and the weasel-like tayra were all discovered using the insides of the deep burrow as a refuge. But it wasn’t just the inside of the burrow that species employed. Many species utilized the sand mound created by extensive digging: peccaries, giant anteaters, tapirs, and pumas all used the sand mound for resting or sand-bathing, while various birds, rodents and lizards hunted in the sand mound. In addition, the three other armadillo species (southern naked tail, nine banded, and six banded) found in the Pantanal also used the burrows.

Over years of study, the camera traps revealed that giant armadillo homes were a mini-biodiversity hotspot for Pantanal wildlife.

“Once I gave a talk about giant armadillos in a rural school and one of the children said: wow giant armadillos are like the government! They give free housing to those who need it!” Desbiez says.

But the animal that Desbiez was most shocked to see using giant armadillo burrows in the Pantanal was the southern tamandua (Tamandua tetradactyla).

“[Southern tamandua] have a prehensile tail and are excellent climbers, well adapted to life in the canopy. What a surprise to find them underground!” he notes. “They were one of the species that uses the burrows the most and spend sometimes over 12 hours underground.” 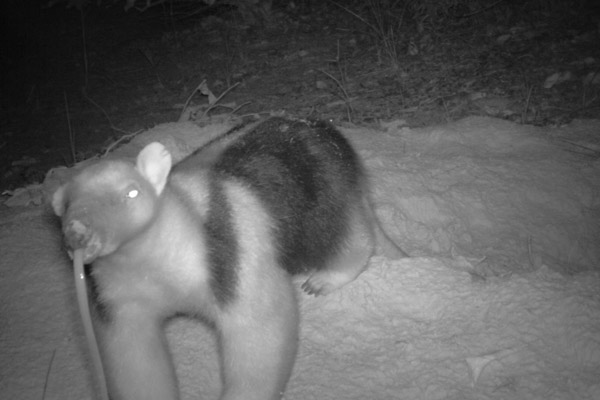 A southern tamandua sticks out its super long tongue at the camera trap after emerging from a giant armadillo burrow. Photo by: The Pantanal Giant Armadillo Project.

Desbiez adds that some tamanduas were even observed using the burrow like a nursery with “female southern tamanduas leaving their young in the burrow [and] returning periodically to lactate.”

The tamanduas are attracted to the burrows, largely because of its temperature, according to Desbiez who calls the burrows a “thermal refuge.”

The temperature inside a giant armadillo burrow doesn’t fluctuate, but stays a comfortable 75 degrees Fahrenheit (24 degrees Celsius) all the time. This allows southern tamandua—and a number of other specie—a sanctuary when it’s uncomfortably hot or cold outside.

This aspect of the burrows could make them even more important to other species in the near-future, according to Desbiez.

But giant armadillo’s engineering goes even further than allowing other species a resting place or hunting grounds. 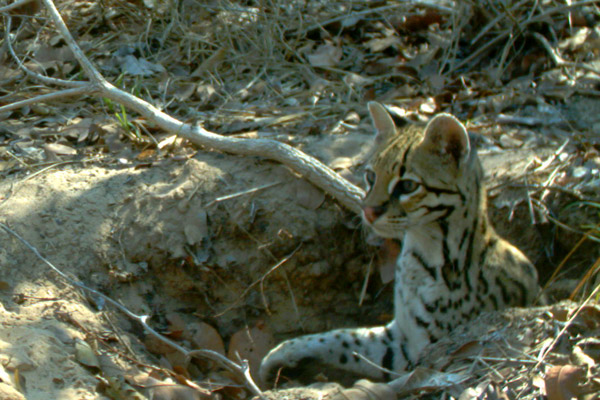 An ocelot peeks its head out of a giant armadillo burrow. Photo by: The Pantanal Giant Armadillo Project.

Scientists theorize that giant armadillo burrows play a role in keeping water at bay on these islands, as well as impacting soil quality and plant diversity. Burrows may even act as catchments for seeds and organic material.

However, the burrows don’t last forever, and it appears they become increasingly less attractive the more they age.

“Parts of the tunnel of the old burrows may be collapsed and therefore lose its purpose as a shelter or refuge from temperature,” explains Desbiez. “However I think there are other reasons as well. In freshly dug burrows there may be more foraging opportunities. Southern tamanduas are often the first animal to visit the freshly dug burrow. We have observed various species of invertebrates in fresh sound mounds and even a small amphibian which stays in the sand as long as it is humid.”

Giant armadillo burrows could also harbor less-welcome visitors: the constant temperature—which brings so many mammals and birds—may also act like a preservative for diseases, spreading them among the menagerie of Pantanal creatures who show up.

“The dark, humid conditions with a constant temperature could potentially favor survival and proliferation of fungus, bacteria and viruses,” Desbiez notes. Scientists are currently investigating the links between giant armadillos, their burrows, and disease. 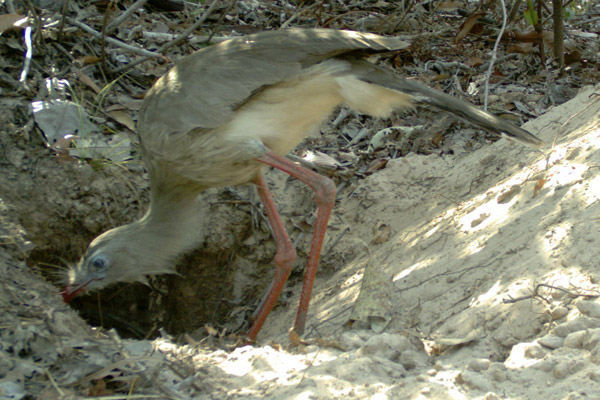 The giant armadillo is currently listed as Vulnerable by the IUCN Red List and like most mammals in South America is believed to be in decline. Habitat destruction and hunting are the primary threats, however the species’ slow reproductive rates and low density—only six estimated in a hundred square kilometers—make matters even more precarious. But in the end, the largest peril to these species may be simple ignorance.

“There are so few species in the Neotropics that have benefited from any long term or specific research. This work goes to show how much we still have to learn and the surprises we can have,” says Desbiez. “There is still so much to learn about giant armadillos and their function in the ecosystem. I feel we have barely scratched the surface and this goes for many other species.”

Through camera-trapping and tracking, Desbiez and his team hope to continue to uncover more surprises about the world’s least-known giant.

“It is amazing,” Desbiez concludes, “giant armadillos are a species most people have never heard about and yet they play such an important role in ecological community.” 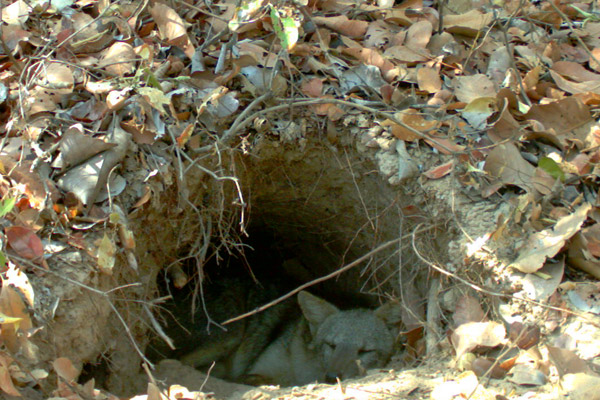 Giant armadillo burrows lead to interesting encounters: like this one of a southern tamandua chasing off an ocelot. 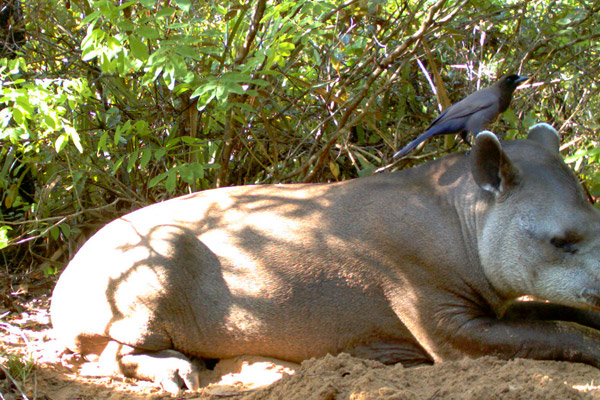 Tapir bedding down in the sand mound. Photo by: The Pantanal Giant Armadillo Project. 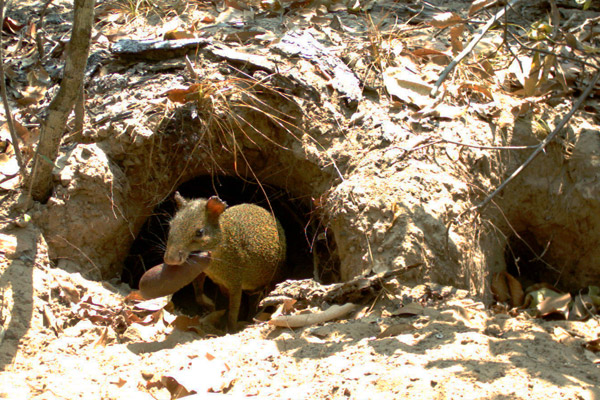 Agouti feeding in the burrow. Photo by: The Pantanal Giant Armadillo Project. 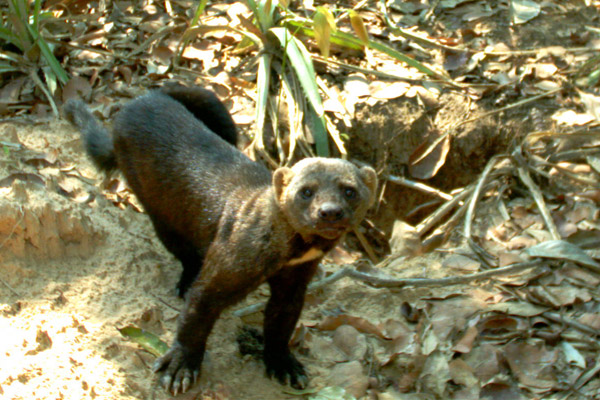 Tayra at a burrow’s entrance. Photo by: The Pantanal Giant Armadillo Project. 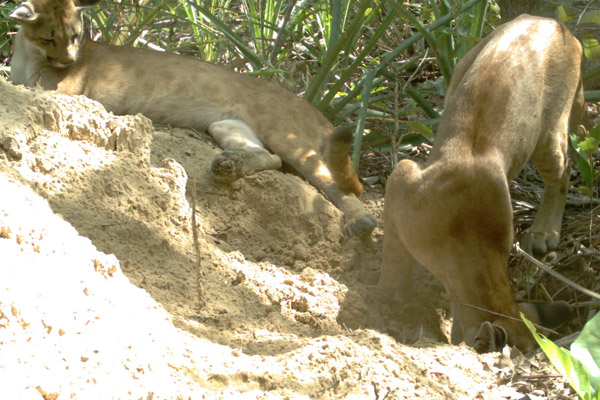 A pair of pumas at a burrow. Photo by: The Pantanal Giant Armadillo Project. 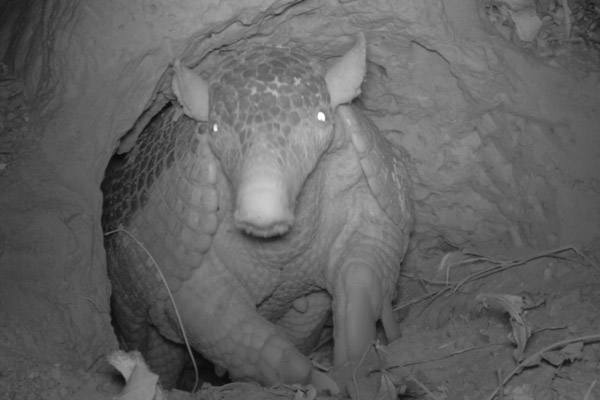 Giant armadillo emerging from its burrow at night. Photo by: The Pantanal Giant Armadillo Project.

(08/12/2013) Around twelve thousand of years ago, the Amazon was home to a menagerie of giant creatures: the heavily armored glyptodons, the elephant-sized ground sloth, and the rhino-like toxodons among others. But by 10,000 B.C. these monsters were largely gone, possibly due to overhunting by humans or climatic changes. There’s no question that the rapid extinction of these megafauna changed the environment, but a new study in Nature Geoscience posits a novel theory: did the mass extinction of big mammals lead to nutrient deficiency, especially of nitrogen, in parts of the Amazon rainforest?