Almost all wild caught marine fish for the aquarium trade will die within a year of capture, according to WWF.

Following months of interviews with Filipino marine exporters and hobbyists, WWF-Philippines have found that roughly 80% of all marine fish die before they are sold, and those that survive long enough to be bought by hobbyists are extremely likely to be dead in under a year.

Unregulated capture techniques and improper bagging along with poor transportation and stocking practices result in the high mortalities, according to WWF-Philippines. Only the hardiest fish are likely to survive, such as clownfish (Amphiprion spp), damselfish (Pomacentrus spp), wrasses (Labroides spp) and gobies. 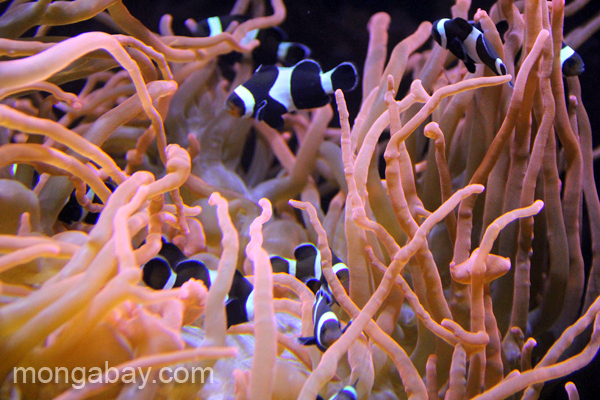 Clownfish in an anemone. Photo by Tiffany Roufs.

Technological advances in the 1970s meant that it was possible to keep marine life in your home aquarium, and by 1992 the trade of marine fish, coral and invertebrates was worth $1 billion worldwide. This industry is a significant driver for the Filipino economy, being especially important for fish collectors throughout the archipelago. Although factors such as climate change, pollution and poor harvesting practices have decimated reefs and depleted marine populations.

Brackish fish (species found where freshwater and saltwater meet) and freshwater fish have long-adapted to dealing with rapid changes in their environment. With heavy rain and storms filling their habitat with mud and silt, they have evolved to cope with major fluctuations. However, marine fish live in one of the most stable environments on earth – the ocean – where any change in composition is less dramatic, resulting in less pressure on species to become hardier. But home aquarium environments are often more variable than oceans, making marine fish less likely to survive than their freshwater counterparts.

Unregulated collection and unsustainable fish farming have resulted in the total loss of certain species from areas where they used to be abundant, such as the emperor angelfish and clown triggerfish, which have become increasingly more popular with hobbyists because of their bright coloration and high-value. Similarly, in the years following the release of the 2003 animated film “Finding Nemo”, consumer demand for clownfish has soared and consequently the natural population of clownfish has decreased nearly 75% in some areas. 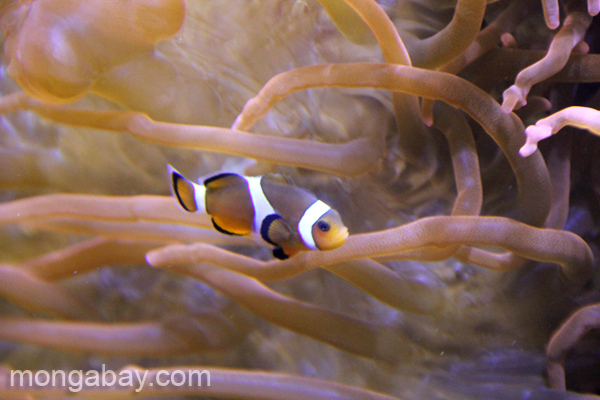 A clownfish in captivity. Photo by Tiffany Roufs.

Since the 1950s fish collectors have used sodium cyanide has become across the Philippines, to subdue hard-to-catch fish. A nerve toxin that stuns fish making them easier to catch, sodium cyanide is spread throughout the coral reefs, typically in coral heads. Unfortunately, the neurotoxin often burns the vital organs of the fish as well as burning into the coral reefs where it is applied, resulting in a 75% mortality rate. This practice adds to other destructive impacts on reef ecosystems, resulting in a rating of “excellent condition” for only 1% of coral reefs throughout the Philippines.

WWF-Philippines is developing solutions to make the marine aquarium trade more sustainable, initially recommending a number of measures including; avoiding hard-to-keep fish, promoting hardy fish, keeping artificial corals and invertebrates, and switching to aquacultured fish. The Bureau of Fisheries and Aquatic Resources (BFAR) has recently approved a scheme involving “wild ranching permits,” where fish farmers can collect marine brood stock which they can then breed, export and sell to hobbyists on the condition that 30% of the offspring be released back into the wild. Raising the prices of marine fish and invertebrates would also mean that only those individuals with the resources, money and time to care for their tank can purchase certain species, thereby increasing the likelihood of their survival.

Gregg Yan, Communications head for WWF-Philippines, told mongabay.com that these “steep prices generally mean that those investing $50 for a long-nosed butterflyfish have the means to keep it alive. The opposite is true in the Philippines, where many locally-sold marine ornamentals are actually export rejects. Usually when the fish are too small, when they have open wounds, diseases, ragged fins, are listless and so on, they are sold cheaply to well-meaning but casual hobbyists. The same long-nosed butterflyfish costs only $2 in Cartimar (a shopping complex in Metro Manila), but it’s usually been through hell.”

Among their recommended solutions for a more sustainable trade, WWF-Philippines has also highlighted some technical approaches to increase longevity, including “the modification of capture, shipping and trade practices. Some include totally eliminating the use of sodium cyanide,” according to Yan. “Field suppliers caught with cyanide-caught fish should be blacklisted, with cyanide tests to be done at random. [Also] replacing volume with value – higher prices mean less fish will be caught by collectors, less will be bought by exporters and less will be bought by hobbyists. The trade off is that capture practices must be absolutely high-grade – one fish to one bag from the start, use of breathable bags for transport, excellent holding and quarantine practices and so on.”

Communities in Fiji, Tonga and the Solomon Islands are learning how to sustainably farm coral and marine fish, along with giant clams and live rock. If these solutions were implemented across the Philippines, it is likely that it will be economically beneficial for the community as well as for the fish themselves, reducing mortality rates to a minimum and protecting the biodiversity of the Pacific Ocean.

(10/22/2013) An Australian sailor has described parts of the Pacific Ocean as “dead” because of severe overfishing, with his vessel having to repeatedly swerve debris for thousands of kilometers on a journey from Australia to Japan. Ivan MacFadyen told of his horror at the severe lack of marine life and copious amounts of rubbish witnessed on a yacht race between Melbourne and Osaka. He recently returned from the trip, which he previously completed 10 years ago.

(07/25/2013) Thirty percent of the fish exported from India in the past seven years were from dozens of threatened species including the endangered red-lined torpedo barb (Puntius denisonii) and the miss kerala look alike (Puntius chalakkudiensis) amongst others, according to a recently published paper in Biological Conservation. By documenting the extent and impact of the trade in rare and threatened freshwater fish species in India, scientists have uncovered the local scale of the aquarium pet trade.

(07/02/2013) The Seafood Watch Program, first created by Monterey Bay Aquarium in the late 1990s, is arguably the best-known guide to sustainably-caught seafood in the U.S. Listing seafood choices in three categories—green (best choices), yellow (good alternatives), and red (avoid)—the guide informs consumers of the best options. However, it’s one thing to create a well-respected guide, and another issues altogether to get producers and consumers to use it. But a newer partnership, the San Francisco Seafood Watch Alliance, is working to bridge this gap. Maggie Ostdahl of Aquarium of the Bay works with the Seafood Watch Restaurant program and restaurants across San Francisco—one of the best places in the country for seafood—to source sustainable seafood. Restaurant partners avoid seafood on the guide’s red list.