Commentary by Matt Finer on 16 September 2013

Ecuador’s President Rafael Correa recently announced to the world that he was ending the 6-year initiative aimed at avoiding oil drilling in a critical piece of the Amazon, the ITT Block of Yasuní National Park. In the speech, and the accompanying Decree, the President emphasized that the exploitation will affect less than 1% of the park. In subsequent remarks, President Correa indicated that the impacted area would be less than 0.001%. Thus, the new government pitch: minimum impact, maximum reward. Here, we counter that impacts related to biodiversity, indigenous people in voluntary isolation, and climate change may be severe.

ITT consists of three major oil fields – Ishpingo, Tambococha, and Tiputini (see Map). Tiputini is near the northern border of the park, Tambococha is in the middle and fully within the park, and Ishpingo in the south is in the core of the park. The initial development plan is just for Tiputini and Tambococha, with an estimated total direct impact to the park of 16.8 hectares.

This initial estimate indeed seems small, but it misleads. An estimated 50% (~460 million barrels) of the ITT oil is further south in the Ishpingo field. A new government report confirms that operations will expand to Ishpingo with the construction of up to five new drilling platforms in the core of the park (see Map). The report indicates that the direct impact could then rise to up to 200 hectares. Although this is a low overall percentage of the park, elimination of 200 ha of arguably the most biodiverse forest on the planet represents a significant ecological impact. Furthermore, if this expansion includes the oil fields in the southern part of Block 31, the block adjacent to ITT, then the area of direct impact would climb substantially. 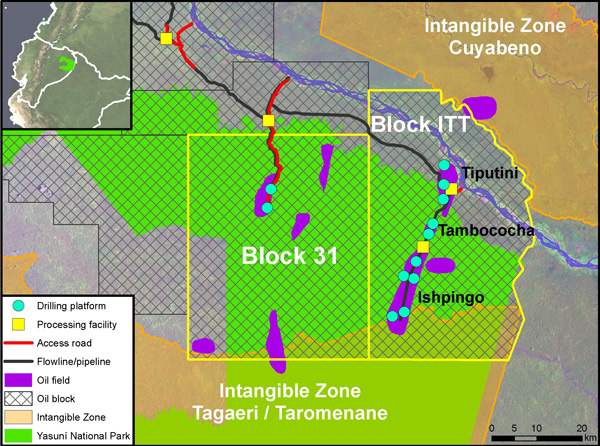 Most worrying of all, the Decree does not prohibit road construction. Access roads often trigger significant secondary deforestation, particularly in Ecuador. Although the initial development plan for Tambococha employs a roadless flowline, there is no guarantee that Petroamazonas, the company in charge of developing ITT, will not build an access road for Ishpingo.

Concerns about new access roads have a recent precedent. In 2012, while officials were touting the extraordinary conservation importance of the ITT area to the world, Petroamazonas was building a new 19 km access road into Block 31, an area with the same extraordinary conservation characteristics. This very road was the subject of an intense science-driven battle from 2004 to 2006, and the conservation community thought this battle ended in victory as the Ecuadorian government prohibited its construction. Then six years later, as if that long debate never even happened, Petroamazonas built the new road into the park while few were paying attention. A repeat of this scenario could easily happen in ITT.

Returning to Ishpingo, even if Petroamazonas does not build a new road, there would be a critical threat to the Tagaeri and Taromenane, the semi-nomadic indigenous people living in voluntary isolation deep in Yasuní. In 1999, Ecuador created an “Intangible Zone,” an area off-limits to oil extraction to protect their territory from the expanding oil frontier.

Unfortunately, Ishpingo, along with the southern oil fields of Block 31, extend into the Intangible Zone. In fact, the proposed new Ishpingo drilling platforms extend right to the tip of the Intangible Zone boundary (see Map). Thus, even seemingly minor impacts such as helicopter and drilling-platform noise may have a profound negative effect. Moreover, impacts from oil contamination or direct human contact could be deadly. Health risks to uncontacted groups due to their lack of immunity to infectious diseases are well documented.

Lastly, we stress the climate implications. One of the most innovative parts of the Yasuní-ITT Initiative was the government commitment to prevent the emission of carbon dioxide, in this case 410 million metric tons, by leaving sizable oil reserves in the ground. Foregoing extraction of oil and gas reserves, particularly in rainforest environments with abundant above-ground biomass, could make an important contribution to mitigating climate change.

In conclusion, President Correa’s claims that drilling ITT will only have a small direct impact are misleading. We are not necessarily opposed to all development, and recently published a peer-reviewed scientific study on the potential of best practice to minimize the impacts of Amazonian oil drilling. However, that study also laid out the importance of considering ecological and social factors when deciding where to drill. Considering these factors, the remaining intact sections of Yasuní National Park, such as the ITT Block, represent the perfect example of where drilling should not occur.

(09/04/2013) Data released this week by Terra-i, a collaborative mapping initiative, shows that deforestation in Ecuador for the first three months of 2013 was pacing more than 300 percent ahead of last year’s rate. The report comes shortly after Ecuadorean President Rafael Correa killed off a proposed plan to prohibit oil drilling in Yasuni National Park in exchange for payments equivalent to half the value of the park’s unexploited oil.