An oil company’s use of a high-frequency mapping sonar system was responsible for a mass whale stranding in northwest Madagascar in 2008, finds a new report.

The report, issued today by an independent scientific review panel, found that the stranding of roughly 100 melon-headed whales was “primarily triggered” by seismic testing conducted by an ExxonMobil Exploration and Production (Northern Madagascar) Limited contractor. 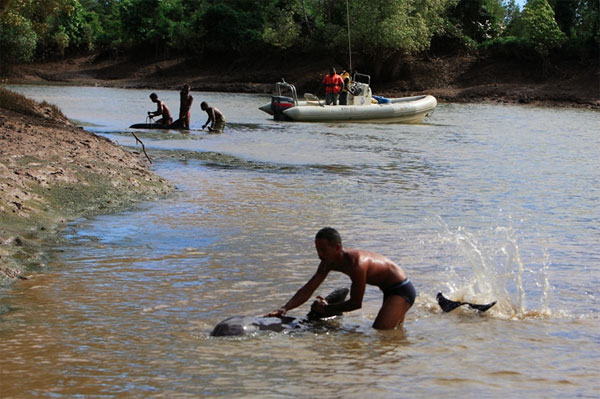 In May-June of 2008, the Wildlife Conservation Society led an international stranding response team to a mass stranding of approximately 100 melon-headed whales in the coastal mangroves of northeastern Madagascar. Photo credit: T. Collins/WCS

The report was put together after a long investigative process involving Malagasy and American government agencies; scientists from the Wildlife Conservation Society (WCS) and the International Fund for Animal Welfare (IFAW), whose staff conducted necropsies after the strandings; and the International Whaling Commission. The report concludes that “The potential for behavioral responses and indirect injury or mortality from the use of similar MBES [multi-beam echosounder systems] should be considered in future environmental assessments, operational planning and regulatory decisions.”

WCS, which helped rescue live whales after the stranding, agrees that the results raise red flags about the impact of seismic testing on marine mammals.

“Based on these findings, there is cause for concern over the impact of noise on marine mammals as these high-frequency mapping sonar systems are used by various stakeholders including the hydrocarbon industry, military, and research vessels used by other industries,” said WCS in a statement.

“Implications go well beyond the hydrocarbon industry, as these sonar systems are widely used aboard military and research vessels for generating more precise bathymetry (underwater mapping),” added Howard Rosenbaum, Director of the Ocean Giants Program for WCS. “We now hope that these results will be used by industry, regulatory authorities, and others to minimize risks and to better protect marine life, especially marine mammal species that are particularly sensitive to increasing ocean noise from human activities.”

The report isn’t the first to highlight the potential adverse effects of sonar-based mapping on whales and dolphins. A spate of studies have linked energy exploration activities and military exercises to whale strandings. A May 2013 paper published in Nature reported there have been no mass strandings in the Canary Islands — formerly a hotspot for such strandings — since they Spanish government imposed a moratorium on naval exercises in the area in 2004.