A federal judge in Brazil has ordered the suspension of construction activities on the Teles Pires due to shortcomings in the environmental licensing process, including the project’s impacts on three local tribes, reports International Rivers.


According to the lawsuit, the Energy Research Enterprise (Empresa de Pesquisa Energetica, or EPE) linked to the Brazilian government’s Ministry of Mines and Energy committed a series of gross errors regarding a required “indigenous component” of the environmental impact assessment (EIA). Initially, EPE attempted to use the EIA for two other planned dams on the same river – São Manoel and Foz de Apiacás – as a proxy for analyzing impacts of the Teles Pires Dam. When a draft version of the indigenous component for the Teles Pires Dam was finally presented over a year after the rest of the EIA was completed, technical staff at FUNAI (the federal agency for indigenous affairs) flagged major shortfalls in the study, especially in terms of downstream impacts on water quality, fisheries and destruction of Sete Quedas, a series of rapids and waterfalls with tremendous cultural, religious and archeological importance for the Kayabi, Apiaka and Munduruku indigenous people.

International Rivers notes that the final version of the indigenous component of the EIA has yet to be approved by FUNAI. 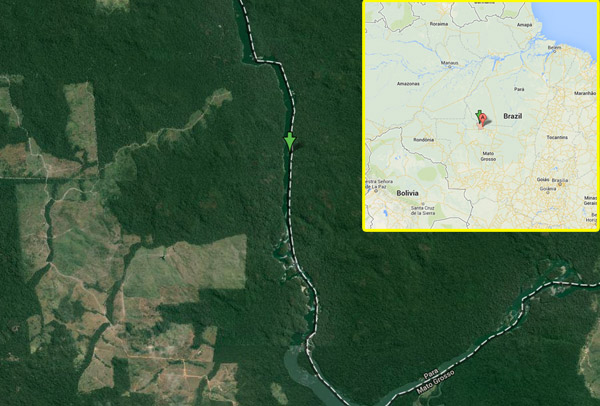 Under the court ruling, Teles Pires Hydroelectric Company faces up to 500,000 Brazilian reais ($228,500) in fines for each day that it fails to comply with the order.

The Teles Pires Dam is one of five large dams planned for the Teles Pires River, a major tributary of the Tapajós River. With installed capacity of 1,820 MW, the dam would be Brazil’s second largest hydroelectic project, after the Belo Monte dam on the Xingu river. Brazil is planning to build scores of dams across the Amazon Basin by the end of the decade. Ecologists warn the activity could alter nutrient flows through Earth’s largest rainforest, while blocking fish migration routes and flooding large areas of forest.