Japan is the largest importer of timber from Sarawak, where deforestation rates are among the highest in the world. Logging far exceeds sustainable rates, Global Witness said, and logging companies systematically violate forestry laws. According to the report, the widespread illegal and unsustainable logging in Sarawak is devastating the province’s remaining tropical forests. Where concessions overlap with customary land, logging in Sarawak is also threatening indigenous communities with severe food insecurity and extreme poverty.

However, despite the systematic corruption, illegal logging and human rights violations in Sarawak’s forest sector, much of the timber imported to Japan is labeled as “legal” under a government-sanctioned timber certification scheme that takes the Sarawak government’s word on whether timber was logged legally. In its report, Global Witness calls on companies in Japan to stop sourcing timber from Sarawak altogether until they can independently verify that any timber they purchase was produced legally and is free from corruption and human rights abuses.

“Sarawak is Japan’s largest source of tropical timber, which might explain why the Japanese government and industry are turning a blind eye to the rampant illegal and unsustainable logging in Sarawak’s forestry sector,” Rick Jacobsen, head of international forest policy at Global Witness, said in a release to the media.

“As Sarawak’s biggest customer for timber, Japan must urgently take measures to ensure that it is not complicit in the destruction of Sarawak’s rainforests and human rights violations against the indigenous peoples who live in them.”

In the report, “Industry Unchecked: Japan’s extensive business with companies involved in illegal and destructive logging in the last rainforests of Malaysia,” Global Witness documented illegal logging practices and human rights abuses committed by two major logging companies in Sarawak, Samling Global and Shin Yang Group. The report cites evidence that both companies have violated Malaysian law and are involved in illegal and destructive logging in their concessions. The report also accuses both companies of violating customary land rights of indigenous communities in Sarawak.

Major Japanese firms such as Sojitz Corporation and Itochu Corporation source timber from these companies, including timber originating from concessions where illegal logging has been documented. Global Witness contacted these and other Japanese companies and industry associations about the allegations against Samling and Shin Yang. However, according to the report, the companies have failed to put systems in place to independently verify that timber products purchased from Sampling and Shin Yang were produced legally. 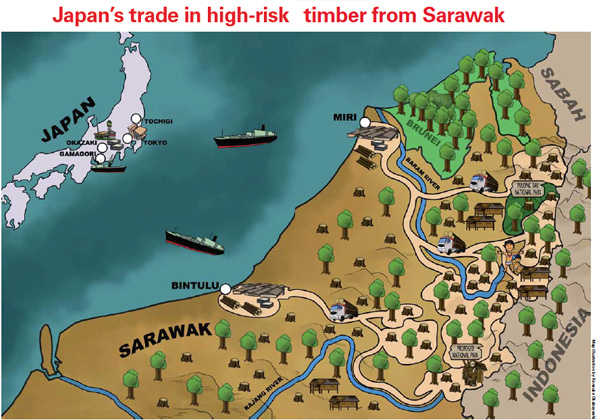 Japan, along with the other G8 member countries, committed in 2005 to stop importing and marketing illegally logged timber. However, while Europe, the United States and Australia have put laws in place to prevent illegal timber from entering their countries, Japan only prohibits the use of illegally-logged timber by government agencies. Private companies in Japan can voluntarily commit to using only legal timber products, but are not legally required to do so.

Even when companies do commit to sourcing only legal timber products, Japan’s process for verifying legal timber, the Goho-wood system, is insufficient, according to the Global Witness report. The Goho-wood system is based primarily on promises of legality made by producer governments and companies. It lacks of a mechanism to independently verify these promises, making it highly likely, the report said, that some illegal wood will end up being certified as “legal” in Japan.

In the case of Sarawak, Japan will accept as proof of timber legality an export document signed by a Sarawak government body. Given the widespread corruption and documented cases of illegal logging in Sarawak, Global Witness questioned the effectiveness of this certification method. In verifying legal timber, Sarawak also does not consider whether land was acquired legally or whether customary land rights of indigenous peoples were respected. This, the report said, means that a large percentage of timber certified as “legal” by the government of Sarawak – and therefore eligible to be certified by the government of Japan – may be linked to serious human rights violations.

The report argues that the illegal and unsustainable logging practices common in the Malaysian province are not in line with Japan’s commitments to stop importing illegal timber or with the corporate social responsibility policies of many Japanese firms purchasing timber products from Sarawak.

Japan imports nearly a third of all timber products exported by Sarawak and is the second largest importer of tropical timber in the world. This, Global Witness said, means Japan is in a particularly important position to help protect Sarawak’s remaining forests. Global Witness urged Japan to prohibit all illegal timber from entering the country, rather than simply encouraging private companies to use legally-certified timber products, and to develop a stricter certification process that protects customary land rights and requires buyers to carry out due diligence on supply chains of wood-based products.