Environmental group, Greenpeace, has accused Herakles Farms of illegal logging in Cameroon after the company has already been lambasted by scientists and conservationists for its plan to build a 70,000 hectare palm oil plantation in one of Africa’s most biodiverse rainforests. Herakles Farms has been under fire from green groups—both in Cameroon and abroad—for years over its oil palm plantation plans, including facing protests from locals who live in the forest to be cleared.

Now, Greenpeace says it has collected evidence of two instances of illegal logging on the company’s land. In one case, logs cut from the forest are dated during a short period in which the company was suspended from forest clearing by the Cameroon government. In the second, likely more egregious, instance, Greenpeace says “logs are being marked in a way that clearly indicates that they are intended for commercial sale.” However, Herakles Farms currently does not have a commercial timber trading license in Cameroon.

In 2012, Herakles Farms abandoned seeking certification from the Roundtable on Sustainable Palm Oil (RSPO) after numerous groups, including Greenpeace, submitted complaints against the company. Herakles Farms has long-argued it will bring jobs and reduce poverty in the long-neglected region. However, locals—who have seen their traditional lands signed away to the company in a 99-year lease—are reportedly split on the company’s benefits. Recently an independent assessment by Forest Peoples Programme (FPP) has found that Herakles Farms failed to gain Free, Prior and Informed Consent (FPIC) of the communities in the region.

Palm oil has become a ubiquitous ingredient in many processed foods as well as cosmetics. However, the industry has been responsible for large-scale deforestation across Southeast Asia, including Malaysia and Indonesia. Now plantation developers are expanding into Africa and Latin America. 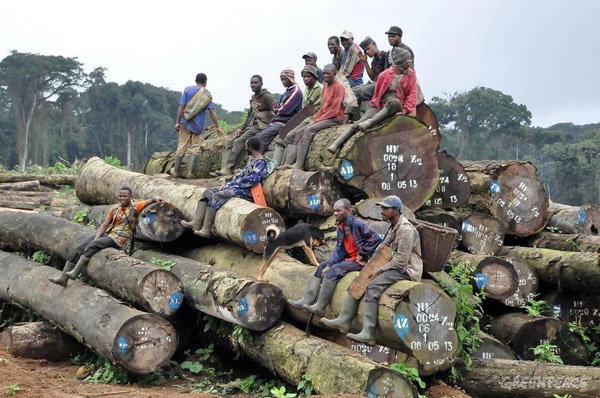 Despite saying no to the project, Adolf and other villagers discovered that Herakles had in fact ignored their wishes and proceeded to bulldoze tracts of forests belonging to the village that border on the area with the neighboring village of Talangaye. © Jean-Pierre Kepseu/Greenpeace.

(06/06/2013) The Cameroonian government has lifted the suspension on controversial palm oil project in the northwestern part of the Central African nation, reports the AFP.

(05/24/2013) An American company has halted work on a controversial palm oil project in Cameroon due to opposition from local communities and environmentalists, reports Reuters.