by Suzanne Goldenberg on 27 September 2013

Hillary and Chelsea Clinton on Thursday deployed their mother-daughter star power to help the effort to save African elephants, brokering an $80m effort to stop the ivory poaching which threatens the animals with extinction.

The crackdown on 50 poaching hot spots in Africa involves several conservation groups and African governments. But conservation leaders, unveiling the plan at the Clinton Global Initiative (CGI) annual meeting, went out of their way to credit Hillary Clinton for giving prominence to the issue of the illegal trade in wildlife while she was secretary of state.

“She has been directly involved,” said Cristián Samper, president of the Wildlife Conservation Society, at a press conference. “She personally reached out to a number of African leaders.”

The CGI anti-poaching plan was the first big international cause championed by Hillary Clinton after she stepped down as secretary of state at the start of this year, after four years in the job. Clinton also gave prominence to wildlife trafficking as a national security threat during her time in the Obama administration. The White House has also taken up the issue, with a new initiative to stop poaching.

The funds now mobilized will be used to hire and train 3,100 park rangers at 50 sites in eastern and central Africa; to fund sniffer-dog teams along the top smuggling routes; and to train law-enforcement officials and judges responsible for prosecuting international trafficking gangs. The CGI is looking to raise an additional $70m for the anti-poaching plan over the next three years. 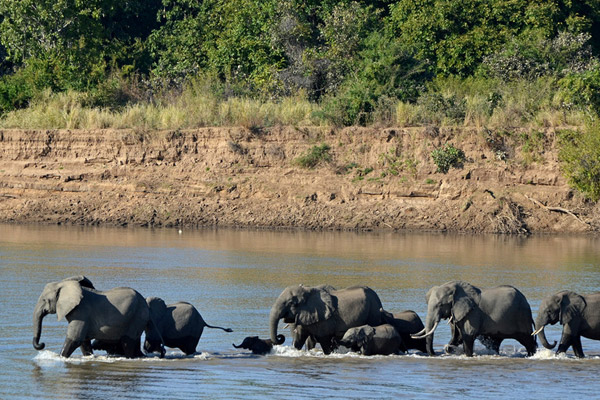 Stopping the illegal trade in wildlife will take a far broader effort than arresting individual poachers, the conservation groups said.

“The poor guy that goes out there with a gun, they are cannon fodder,” said Patrick Bergin, president of the African Wildlife Foundation. “We need to go higher up the food chain. There are people commissioning this ivory.”

About 285,000 elephants—or two-thirds of the entire elephant population in Africa—live in the targeted areas. The money will also be used to lobby for a ban on all commercial ivory sales until elephant populations are brought back to healthy levels in Africa, conservation leaders said.

Hillary and Chelsea Clinton were introduced to the poaching threat to elephants during a visit to Africa in 1997. Chelsea Clinton made a return trip last July. The Clintons’ involvement boosts the profile of the fight against the illegal wildlife trade at a time when the elephants need it most, conservation leaders said. Some 95 African elephants are killed every day for their ivory – park rangers in Zimbabwe this week found the corpses of 90 that had been poisoned with cyanide—in an illegal trade that has grown exponentially since the late 1990s.

A kilo of ivory can sell for $3,000 to collectors in China or America—the prospect of huge profits has attracted criminal gangs and rebel militias, such as the Lord’s Resistance Army, which originated in Uganda, or al-Shabaab in Somalia, which claimed last weekend’s deadly attack on a Nairobi mall.

The initiative announced on Thursday brings together the main conservation groups, including the Wildlife Conservation Society, the African Wildlife Foundation, Conservation International, the International Fund for Animal Welfare and the World Wildlife Fund, as well as a number of African governments. These include Botswana, Ivory Coast, Gabon, Kenya, South Sudan, Malawi and Uganda.