China’s top two oil companies have been penalized for missing pollution targets, reports China Central Television (CCTV). The Ministry of Environmental Protection has suspended all refinery projects for China National Petroleum Corporation (CPNC) and the China Petrochemical Corporation (Sinopec) until they meet their pollution targets. The move is a part of a wider crackdown on pollution across China, which has suffered from record air pollution.

Both CPNC and Sinopec are lagging behind two emissions goals. They have made no progress in cutting their nitrogen oxide emissions, which are actually on the rise, despite demands to cut these emissions by 8 percent by 2015 (from 2010 levels). A greenhouse gas, nitrogen oxide can also become toxic when bonded with other chemicals and produce acid rain.

In addition, cuts in sulphur dioxide are behind annual goals of 10 percent reduction every year from 2010 to 2015. Sulfur dioxide is a potent air pollutant, which can cause respiratory problems and premature death.

In August, China announced it would invest $275 billion over the next five years in cleaning up air pollution in the greater Beijing area and surrounding cities. The Chinese public has become increasingly vocal over the nation’s vast environmental problems, which have been in part caused by China’s meteoric economic growth over the last few decades.

China is currently the world’s largest emitter of carbon dioxide, the primary greenhouse gas fueling global warming, although its per capita emissions still lag behind a number of developed countries. 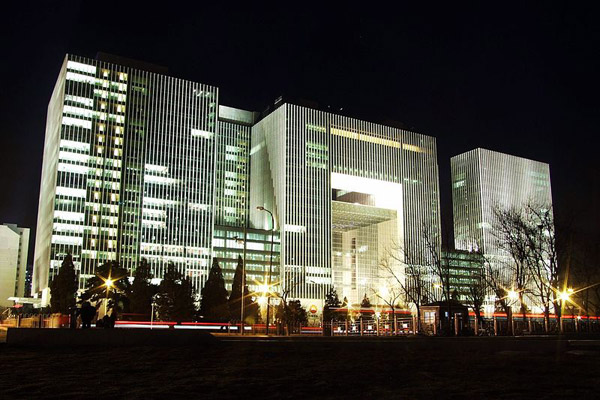 The headquarters of China National Petroleum Corporation in Beijing. Photo by: Charlie Fong.

(05/23/2013) China has unveiled details of its first pilot carbon-trading program, which will begin next month in the southern city of Shenzhen. The trading scheme will cover 638 companies responsible for 38% of the city’s total emissions, the Shenzhen branch of the powerful National Development and Reform Commission (NDRC) announced on Wednesday. The scheme will eventually expand to include transportation, manufacturing and construction companies.

China approves another mega-dam that will imperil endangered species

(05/21/2013) Chinese environmental authorities have approved construction plans for what could become the world’s tallest dam, while acknowledging that the project would affect endangered plants and rare fish species.