by Mrinalini Erkenswick Watsa on 30 September 2013

A camera trap survey along the Sikre River in Honduras has discovered that the region is home to a menagerie of rare mammals, including giant anteaters. The survey, published in mongabay.com’s open access journal, Tropical Conservation Science, recorded five cat species in 70 square kilometers.

The Rio Plátano Biosphere Reserve (RPBR), through which the Sikre River flows, covers 8,300 square kilometers of land and is host to five indigenous groups—Miskitos, Pech, Tawahkas, Garifu and Mestizos. However, few studies have systematically documented the large mammals within the reserve.

Camera-trap technology, an effective and noninvasive way to monitor biodiversity, has become a hugely popular tool for researchers in recent years who have used it in a wide array of habitats to record the movements of animals. David Gonthier and Franklin Castañeda, the authors of this study, ran camera traps for 2,040 nights in the RPBR, recording a total of 116 animal sightings.

The authors state that “[Each camera was placed] along wildlife trails, near creeks, other waterways, ditches, and especially in pathways with clear evidence of use by wildlife.” They used a combination of single camera and dual camera stations—the latter are used to record both flanks of an animal to maximize chances of identifying individuals through markings. 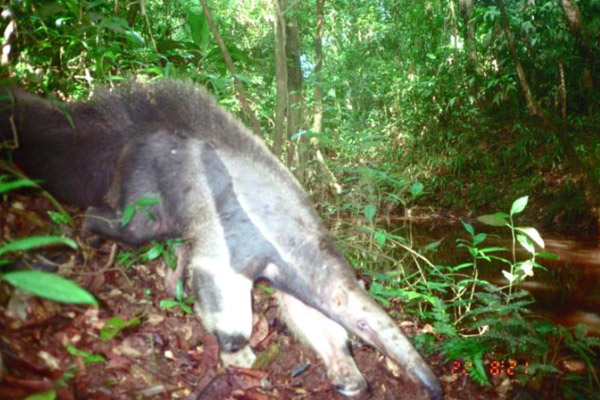 The authors observed four mammals, three birds and one reptile in broad-leaf forest, but no sighting records were obtained in pine savanna habitat. The most commonly viewed species was Baird’s tapir (Tapirus bairdii) seen a total of 33 times, followed closely by the Central American agouti (Dasyprocta punctata)—a seed-eating rodent—and the white-nosed coati (Nasua narica)—an omnivorous mammal related to the raccoon. They also made two remarkably fortuitous sightings of the giant anteater (Myrmecophaga tridactyla), which is listed as Vulnerable by the International Union for the Conservation of Nature (ICUN) Red List.

Although not seen as frequently as the tapirs and agoutis, Gonthier and Castañeda also recorded several instances of pumas (Puma concolor), commonly known in North America as mountain lions or cougars, and ocelots (Leopardus pardalis), which are medium sized cats with spotted patterning. Three other cats—jaguar (Panthera onca), jaguarundi (Puma yagouaroundi), and margay (Leopardus wiedii)—were detected through observation, scat, and pug marks, but were not recorded on the camera traps.

The study concluded that while certain species, such as peccary; pacas, nocturnal rodents in the Cuniculus genus; and opossums (Didelphis species) were recorded at lower than expected levels, in comparison to primary Amazonian rainforest in Peru, the giant anteater was captured at twice the expected rate in this study. Although the giant anteater has been extirpated from several areas in Central America, it appears to be thriving in Honduras.

“This study documents a species richness of large- and medium-sized mammals in the broad-leaf forest habitats of the Sikre River that is comparable to richness found in other studies in the Neotropics,” report the authors. However, several hunting rafts and camps were observed in the study site. The authors contend that maintaining the delicate balance between the fauna and native populations that hunt could prove challenging in the RPBR, as it has in other locations across the Neotropics. 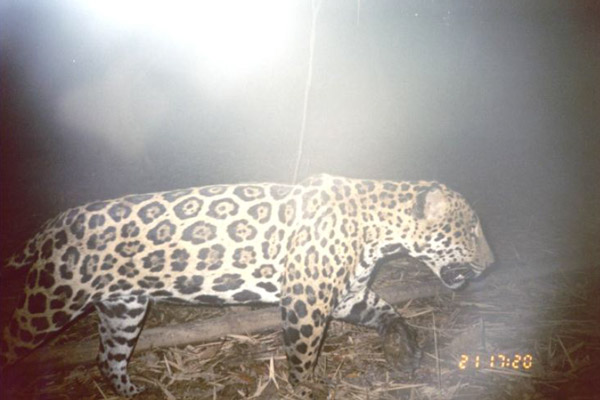 Jaguar in 2007 near Sikre River. Photo by: Franklin E. Castañeda. 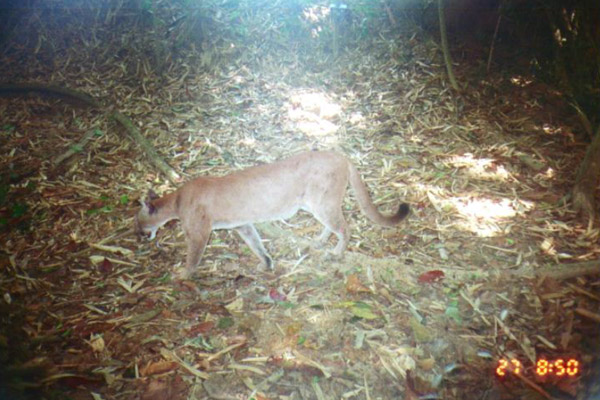 Indigenous people of Honduras granted one million hectares of rainforest

(09/12/2013) One-hundred and fifty years after a treaty with England granted the Miskito people rights over their land–a treaty which was never fully respected–the government of Honduras has officially handed over nearly a million hectares (970,000 hectares) of tropical forest along the Caribbean Coast to the indigenous people. The Miskito are found along the eastern coast of both Honduras and Nicaragua and number around 200,000.

(05/15/2013) A stunning new species of pit-viper has been discovered in the cloud forest of Honduras. The venomous snake is described in the journal ZooKeys.

Amphibian, tapir paradise in Honduras being ravaged by illegal deforestation

(02/06/2013) Located in a mountainous area near the border with Guatemala, Cusuco National Park in Honduras is recognized by researchers as a critical refuge for endangered amphibians in a country that has suffered from widespread deforestation. But while the park largely escaped the devastation that has affected other protected areas in Honduras, the situation seems to be changing: since 2010 there has been a sharp increase in deforestation. Poachers, small farmers, and cattle ranchers are moving into the park using a network of research trails and camps established by Operation Wallacea, a British conservation science NGO.