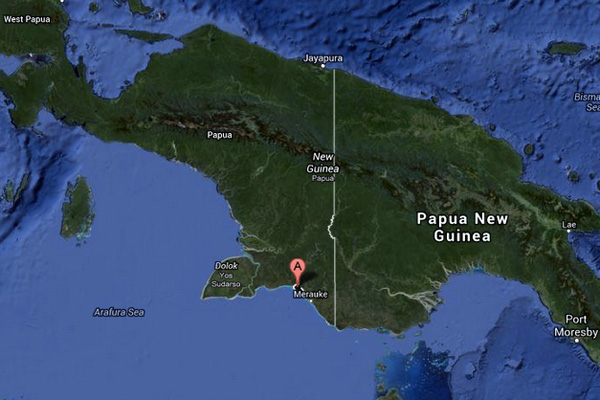 Land grabs and environmental destruction linked to an agricultural megaproject in Indonesia’s Papua province are devastating indigenous communities and causing severe food shortages in some areas, alleges a coalition of NGOs. Agro-industrial development in Papua, on the island of New Guinea, has left indigenous communities cut off from their traditional livelihoods and living in abject poverty, the coalition said in a report released on Monday calling for the suspension of the project.

In a submission to the UN Committee for the Elimination of Racial Discrimination (CERD), a group of 27 Indonesian and international organizations documented numerous abuses against indigenous Malind communities linked to the Merauke Integrated Food and Energy Estate (MIFEE) project, an agro-industrial project covering an estimated 2.5 million hectares of customary land and forests in Indonesian New Guinea. The submission calls on the UN committee to urge Indonesia to immediately suspend any part of the project that may put the Malind or other indigenous groups at risk and to provide support for affected communities.

Under the government-initiated MIFEE project, plantation and timber companies have acquired large swaths of customary Malind land without obtaining free, prior and informed consent and without providing adequate compensation to communities, the NGOs said in the submission. Without access to their traditional lands, Malind communities have been left living in poverty. In the Zanegi and Baad villages near an industrial tree plantation operated by PT. Selaras Inti Semesta, a unit of Medco Group, the coalition reported acute hunger and chronic child malnutrition, including the deaths of five malnourished infants in the first half of 2013 alone.

“Disease and undernourishment are rampant,” said Sophie Chao, a project officer with the UK-based coalition member Forest Peoples Programme (FPP), who visiting Zanegi in May 2013. “[In] 2013 alone, five infants have died from malnutrition.”

“Generalised emaciation, water-related skin infections, infant and child lethargy and bloated stomachs are all flagrant evidence of the severe food insecurity faced by the community as a result of the loss of their customary lands and livelihoods to incoming investors,” Chao added, in a press statement released on Monday.

Yosefa, a 31-year-old Malind woman from Zanegi village, said the malnutrition problems began after the company arrived, causing pollution and ecological changes that destroyed food supplies in the village.

“Before the company, there was little illness,” Yosefa said, as quoted by FPP. “We would eat sago and walk the forest all day without being weary. Now, the sago dies and the earth is dry. The rivers are dark and oily, and the fish drunk on pollution. Our children are dying because our sacred mother land has been ripped away from us. Soon, the Malind people themselves will cease to exist. When the forest disappears, the Malind will disappear.”

Large-scale plantation expansion in Indonesia is part of a broader plan for economic development in the country, which Indonesian President Susilo Bambang Yudhoyono has said is designed to be both “pro-poor” and “pro-environment.” In the CERD submission, however, the NGO coalition said that the MIFEE project has failed to improve the economic situation of the Malind people.

“MIFEE is not designed to provide jobs or development for the local population because their way of living off the land as hunter-gatherers and small-scale farmers has not prepared them for commercial farming,” the submission stated. Instead, the Malind are subject to discriminatory conditions of employment. Indigenous Papuans employed as part of the MIFEE project are given menial jobs and paid rates below a living wage in the province, while higher-paid skilled positions go to migrants from outside the province.

Without their land, indigenous communities are left with no choice but to relocate – usually without receiving any relocation assistance – or accept low-paying jobs on the plantations, a situation the coalition said may constitute forced labor.

Lowland forest in Papua. Photo by Rhett A. Butler

The coalition accused companies operating under the MIFEE project of either failing to obtain consent from traditional land owners altogether or obtaining lands through coercion, deceit and manipulation of Malind leaders and communities.

In some cases, the coalition said in the submission, clan leaders were given money in exchange for releasing local customary land to the company and signing a document stating that there are no third party interests in the concession area. In other cases, companies brought clan leaders to the city of Merauke, provided them with hotels and money for alcoholic drinks and prostitutes, then asked the clan leaders to sign land release agreements in a drunken state.

In cases where land was “leased” from communities, fees have ranged from $0.20 per hectare for 35 years (not per annum) to just over $25 per hectare, with many lease agreements failing to specify whether the land will be returned to the community at the end of the lease or if it will become state land.

Military involvement in MIFEE investments further hinders the consent process. In Monday’s media release, the coalition said that, without exception, interactions between the company and the communities are held in the constant presence of the military and armed forces.

Collusion between security forces and plantation and extractives companies occurs throughout Indonesia. Security forces are often hired by companies to provide security, and members of indigenous communities opposing investment projects have been harassed, intimidated, criminalized and even killed by police and military personnel. In an interview with Mongabay-Indonesia last week, Chao explained that despite numerous inquiries into whether these arrangements take place legally, FPP has not been able to determine if collaboration between companies and state security forces has any legal basis, making it difficult for communities to know whether they can appeal.

In their submission, the coalition cites documented cases of beatings, intimidation and threats by military and police supporting plantation companies in Papua, including cases where security forces have intervened in “negotiations” between companies and communities, threatening or intimidating community members. The anonymous online watchdog Awas MIFEE also reported last month that indigenous leaders from Kampung Yowid opposed to a planned sugar cane plantation taking place under MIFEE were intimidated into signing a document from the company, PT Mayora, after police mobile brigade members employed by PT Mayora accused them of being members of the separatist Free Papua Movement (OPM).

In 2011, the CERD raised concerns about military support for land encroachment taking place under MIFEE with Indonesia’s Permanent Mission to the UN. However, since that communication the Indonesian government has increased the military’s role in MIFEE by providing a legal basis for military involvement in infrastructure development related to the project, a move the coalition describes as “deeply troubling” given the Indonesian military’s history of abuse in Papua.

The report is the coalition’s third submission to the CERD regarding MIFEE, submitted under the committee’s urgent action and early warning procedures (EW/UA procedures). After the first submission
in July 2011, the CERD raised concerns with the Indonesian government about the allegations of abuses linked to MIFEE through a communication to the Indonesian government in September that year, also under its EW/UA procedures.

However, despite the committee’s recommendations and a second submission by the NGO coalition in February 2012, Indonesia has failed to take any corrective action regarding MIFEE, the coalition said. The situation has continued to deteriorate, they said in a media release, and there has been no discernible change in government policy or practices on the ground regarding the project.

Recommendations to the CERD

In the statement, the coalition urged the CERD to raise concerns regarding the MIFEE project with the Indonesian government. The coalition called on the committee to urge Indonesia to suspend any part of the project that may threaten indigenous groups, provide support for communities affected by the project, and ensure that labor conditions on MIFEE project sites meet international standards. Indonesia should also implement relevant laws designed to increase protections for indigenous peoples in the country, including the Draft Law on the Recognition and Protection of the Rights of Indigenous Peoples and a recent Constitutional Court decision that grants indigenous groups control over their customary forests.

Regarding the human rights situation in Papua more broadly, the coalition asked the committee to express concern about human rights violations against indigenous Papuans in Indonesia and to press Indonesia to establish a Human Rights Court and a Truth and Reconciliation Commission for Papua. The submission also called on Indonesia to accept requests for visits to Papua by the UN Special Rapporteurs on the Rights of Indigenous Peoples, the Right to Food, and Contemporary Forms of Slavery.