by Claire Salisbury on 11 September 2013

As the illegal poaching of African elephants and rhinos reaches epidemic levels, other species are also suffering catastrophic losses as a direct result of poachers’ behavior. A recent incident in July, where a poisoned elephant carcass led to the death of 600 vultures near Namibia’s Bwabwata National Park, has highlighted how poachers’ use of poison is now one of the primary threats to vulture populations. Poachers poison carcasses to kill vultures, since large flocks may give away the location of poaching activity, attracting the attention of law enforcement officials.

“By poisoning carcasses, poachers hope to eradicate vultures from an area where they operate and thereby escape detection,” explains Leo Niskanen, Technical Coordinator, IUCN Conservation Areas and Species Diversity Programme. “The fact that incidents such as these can be linked to the rampant poaching of elephants in Africa is a serious concern. Similar incidents have been recorded in Tanzania, Mozambique, Zimbabwe, Botswana and Zambia in recent years”.

African vultures are highly imperiled, and are under pressure from a range of factors, including habitat loss as well as poisonings. Drastic population declines over the last 30 years have resulted in many species being classified as threatened by the IUCN. On average, the number of vultures in West Africa has dropped by 42% during this time, with Rueppell’s vulture (Gyps rueppellii) suffering losses of up to 85%.

“The current rate of population declines will likely see the extinction of most of Africa’s vultures in the next 40-50 years should the current threats continue to have the level of impact they currently do,” André Botha, Co-chair of the IUCN Species Survival Commission Vulture Specialist Group, told mongabay.com.

“However, it could happen sooner should occurrences such as these mass-poisonings continue or escalate.”
Although the magnitude of the incident in Namibia is clear, the details have been difficult to assess accurately because the mass poisoning was not reported for some weeks. 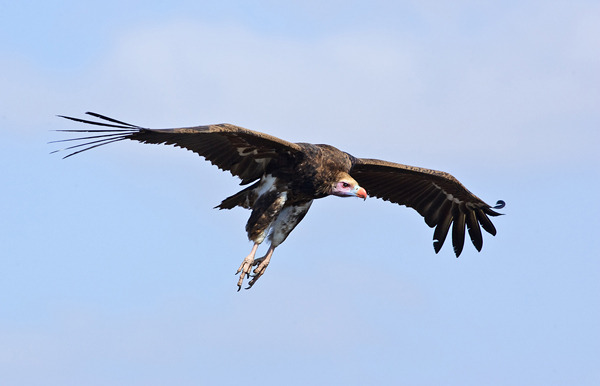 The sun shines on a White-headed Vulture (Trigonoceps occipitalis) showing off the colors in the face. Photo by André Botha.

This was the third incident of poisoning by poachers in Namibia this year, Holger Kolberg, Ornithologist at the Namibian Ministry of Environment & Tourism, told mongabay.com.

Kolberg says that the nature of the region where the incident took place (until recently known as the Caprivi strip, but now called the Zambezi region), located close to an open border with Botswana, is one of the main difficulties in dealing with this case and with poaching in general.

“The conservation and law enforcement staff are few and far between (imagine patrolling an area the size of Belgium with 20 policemen and 10 conservation officials and you know what I mean) so we have a really tough job to stay on top of things. Add to that, that the conservation head quarters (where e.g. all the scientists are based) is more than 1000km away and you can probably imagine the difficulties one faces,” Kolberg explains.

“Commercial ivory poachers have worked out that it is difficult to patrol the area and therefore are targeting it,” he added.

As tens of thousands of elephants are poached across Africa each year, the impact ofpoisoning such carcasses is huge. Not only are the poisoned vultures killed, but young vultures in the nest will also perish when their parents die. Vultures travel enormous distances to find carcasses, so population declines can occur over a large area. In this incident tags were only recovered from two birds, but these indicated that they originated from Kimberley in South Africa, approximately 1000km away, Botha said.

The current decline may have serious ecological and human health consequences in the longer term, say IUCN experts. The loss of vultures would be keenly felt, because they play a critical role within an ecosystem. Their scavenging behavior does not endear them to people, but by quickly cleaning carcasses they limit the spread of disease to humans, domestic animals, and wildlife, as well as keeping populations of other species which spread disease in check. They also offer a valuable service to farmers, who would otherwise need to pay to dispose of diseased or injured livestock. Where vulture populations have recently crashed in India, increases in rabies and feral dogs can be directly attributed to the loss of these aerial scavengers.

Although poisoning by poachers is rife, farmers also use poison to reduce predator populations to safeguard their livestock, and this can severely impact vultures too. Kolberg sees limiting the use of poison in general as key to vulture conservation. 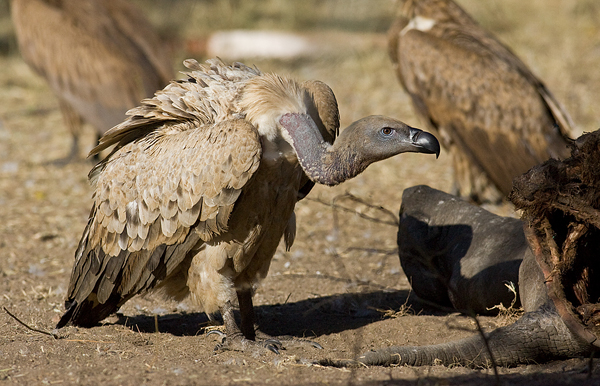 “The most urgent action that needs to be taken is to ban completely the sale of poison for predator control. Secondly, poison to be used in agricultural applications needs to be strictly controlled and adherence to regulations needs to be enforced,” Kolberg said. “This is, of course, also the biggest challenge, because we just do not have the staff that is qualified to do all this work, the legislation is mostly there but enforcing it is nigh on impossible.”

The IUCN wants the law changed to recognize the seriousness of crimes such as the case in Namibia.
“We are engaging with African governments at the highest level to raise awareness of these threats and the possible implications of the loss of vultures from the environment,” Botha told mongabay.com. “At the same time, we aim to inform communities and members of the public of the public-health threats that the loss of vultures pose to them.”

Botha concludes, “We believe that crimes of this nature should have the same priority and be subject to similar penalties as those ascribed to incidents of poaching of the mega-fauna such as elephant and rhino.” 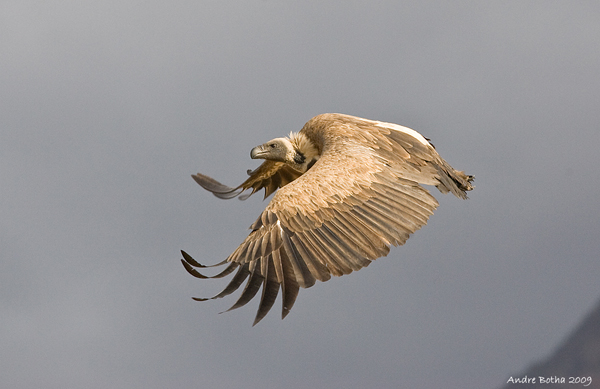 (04/11/2013) The Namib is the oldest desert on Earth, composed of gravel plains and dune fields that have been intact for circa 40 million years. It forms a thin strip along the coast of southwestern Africa running for approximately 2000 km from Namibia into Angola. Its unique assemblage of flora and fauna are specialised for desert life and include one of the longest lived organisms on the planet, a plant named Welwitschia mirabilis, with a lifespan of 5 – 15 centuries. The Namib is also home to the only truly desert dwelling chameleon on the globe, the Namaqu chameleon (Chamaeleo namaquensis). The gravel plains are home to a multitude of invertebrates and small vertebrates. The topsoil is gypsum and calcium carbonate enriched, and forms a delicate crust upon which impressions of tire tracks and footprints remain for decades.