Raising young lemurs in communal crèches benefits both mothers and offspring, a new study has found. Andrea Baden and colleagues, of Yale University, studied a group of black-and-white ruffed lemurs (Varecia variegata) in Ranomafana National Park, Madagascar. This is the first study to examine the consequences of different parenting strategies in the ruffed lemur. By observing how mothers split their time between different activities, they discovered that crèche use – where infant care was shared between mothers – corresponded with an increase in the amount of time a mother spent feeding. For young lemurs, being raised in communal nests actually gave them a higher chance of survival.

Black-and-white ruffed lemurs are large-bodied social primates that live in the eastern rainforests of Madagascar, and have an almost entirely fruit-based diet. Reproduction is synchronized, and in this study seven females gave birth during a two week period. Unlike many primate species, young are born undeveloped, even unable to cling to their mothers’ backs, so they must be cared for in nests until they are big enough to travel independently.

The study, published in Behavioral Ecology and Sociobiology, found that females built a number of nests during the gestation period, with some building as many as fifteen. Females gave birth to litters of 2-3 young, and for the first few weeks of life infants were cared for solely by their mothers. Communal nesting, typically involving two litters sharing a nest, began when the young lemurs were six weeks old. Six of the seven mothers nested communally at least once, although the amount of time their young spent in crèches varied. Two of the mothers only rarely or never shared nests. But females who shared nests were able to spend significantly more time feeding than those that did not participate in communal nesting, and time feeding and foraging increased with increasing crèche use. All infants survived until the start of the communal nesting period, but infant mortality was subsequently significantly higher for single nesters than communal ones.

Behavioral observations were combined with genetic data which made it possible to work out whether it was only related lemurs that were assisting each other. The study found that although relatedness and long-term social relationships were positively correlated with the extent of communal nest use, “not all cooperative dyads [two individuals] were related, and not all related dyads cooperated with each other.” The benefits of communal nesting were the same regardless of whether the lemurs were related to each other.

“Kinship may have helped the evolution of cooperative breeding in primates but the mutual benefits may outweigh the costs of helping, irrespective of any family relationships” says Baden, who believes that the current research sheds light on understanding just how communal breeding evolved. “Our results contribute to a growing body of evidence suggesting that kin selection alone cannot explain the extensive cooperation observed in many animal taxa.”

In six years of study, only one reproductive event was observed. Such rare and unpredictable reproduction makes research a challenge. The scientists point out that, despite a relatively small sample size, their study “nonetheless represents reproductive output over 48 lemur-years”. The timing of reproduction is not fully understood, but it is likely that the lemurs respond to environmental cues.

“In 2008, Cyclone Ivan hit. More than 2,000 [millimeters] of rain fell over the course of three days. It’s possible that this somehow signaled the likelihood of a highly productive fruiting year”, Baden told mongabay.com.

Black-and-white ruffed lemurs are classified as Critically Endangered by the IUCN, having suffered a decline of 80% over the last 27 years. Baden fears that their fruit-dependent diet and sporadic reproduction will make them even more at risk in the future. Ruffed lemurs are “among the first animals to disappear when habitats become disturbed or degraded, as large fruiting trees are typically targeted during selective logging” Baden explains. “My concern is that climate change and the erratic climatic variations that come with it might have severe and significant repercussions for ruffed lemur life histories.” 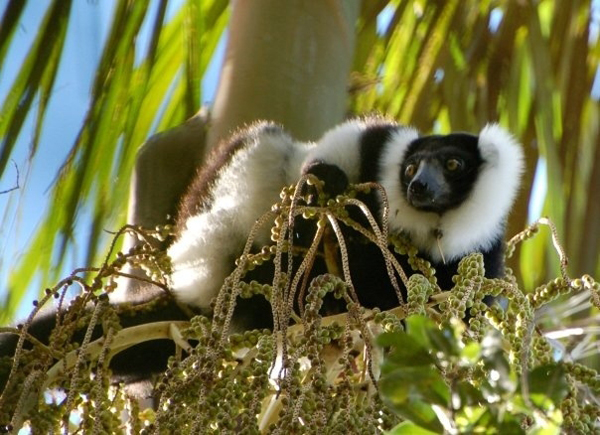 One of the most surprising aspects of the results for Baden was the extent to which female behavior changed during the breeding period. “It really seems like infants are driving sociality in this species. In non-reproductive years, females were almost asocial.”

“It’s fascinating” Baden added, “by having a litter of three infants and then communally rearing those babies, females can essentially make up for two lost years of reproduction. These animals have really perfected their parenting system to adapt to these reproductive lags.”

Baden feels that lemurs are frequently overlooked in discussions of primate social evolution.

“Ruffed lemurs are really interesting because they actually share several traits – things like fission-fusion social dynamics and cooperative infant care – with higher primate species that many would consider to be quite socially complex” Baden said. “I think we’re starting to learn that, while lemurs perhaps differ from higher primates in several of their ‘solutions’ to evolutionary problems, they have come up with some really interesting and unusual adaptations that can still inform our broader understanding of primate evolution.” 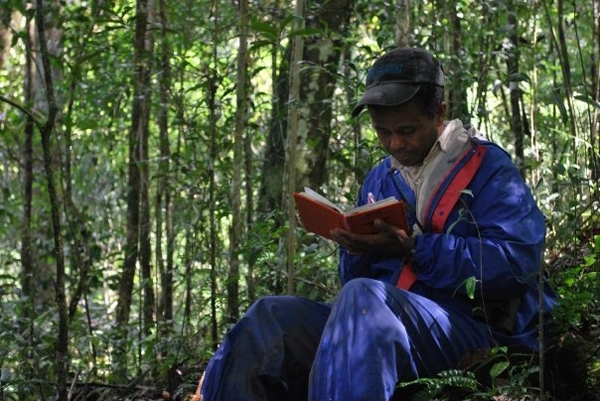 Data collection in the field. Photo by Andrea Baden. 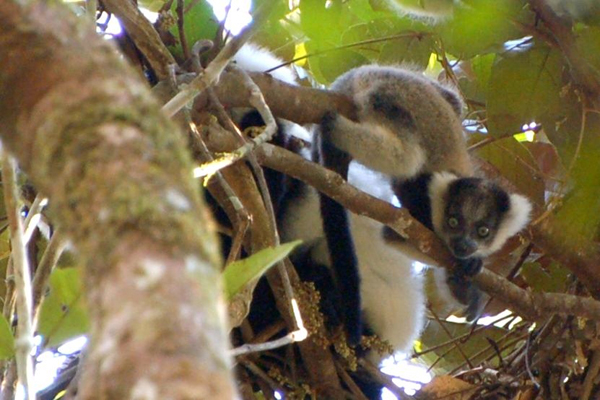