Keeping track of the number of wild animals killed illegally has never been easy. From counting carcasses, to looking at official records and trade logs, managers have had to innovate. Now, a recent paper in the journal Biological Conservation has suggested simple recipe-book mathematics as a tool to get more accurate numbers.

As populations change over time, they follow certain patterns when they are not disturbed in any way. After counting populations and getting real time data overtime, scientists can use simple mathematical equations to predict what will happen to the population in the future. Known as population modeling, this is a tool that can tease out the secret history of a population from numbers.

Karpagam Chelliah, Harshavardhan Bukka and Raman Sukumar from the Indian Institute of Science in Bangalore, India, used mathematics to understand population trends in the elephant. They developed a model that uses three ratios to describe a population: the sex ratio, the ratio of old males to young males, and the proportion of adult males. Together the researchers were able to use these ratios to predict how many elephants were poached over a certain period of time.

“Getting accurate information about age of elephants maybe a problem, but an approximate classification like old and young is possible when out counting elephants,” said first author Karpagam Chelliah. When tested with real data from two populations, one of Asian and one of African elephants, the model predicted with reasonable accuracy the number of elephants poached in both. 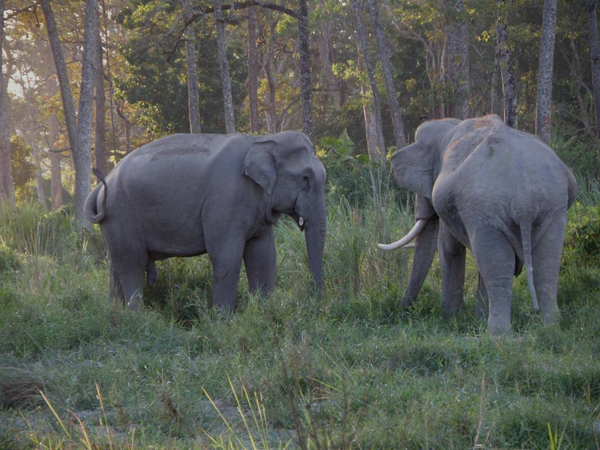 Asian elephants. Both these elephants are males. Some males have no tusks, or very reduced tusks, and are called makhnas. Photo by Karpagam Chelliah.

“These two populations are excellent to test the model because they present an interesting contrast. While males of both species are killed for ivory, the tusked female African elephant is also poached but the tuskless female Asian elephant is virtually immune to such harvest,” the authors note in the paper.
The model does make certain simplifying assumptions – it assumes constant birth rate and death rate, and that no new animals are entering or leaving a population, which is unrealistic considering natural populations. But the researchers still feel confident that their model provides accurate results.

It also simplifies the rather complicated population dynamics into a very few terms, which can affect the model outcome when applied to a large variety of populations. “Every new parameter we add to model comes with its own variance due to inherent process errors and sampling errors. So from my experience adding more variables, however biologically relevant, may improve the accuracy of the mean you might predict. But the deviation gets wider in most cases,” notes Chelliah.

The model seems to hinge on the accuracy of counts of elephants, but the authors feel that each term has an error margin that can take possible faulty measurements into account. “Larger samples sizes could overcome some of the problems. At the same time, scrutiny of the field data by experienced researchers to look for inconsistencies would help us decide on how useful the data are for making harvest estimates,” says senior author Sukumar.

To get an opinion about the feasibility of using this model in managing elephant populations, mongabay.com interviewed Ajay Desai, co-chair of the Asian Elephant Specialist Group, which has helped in the development of the Convention on International Trade in Endangered Species (CITES) system for Monitoring the Illegal Killing of Elephants (MIKE) and The Elephant Trade Information System (ETIS). Desai felt that the real need of the hour was real-time monitoring of elephant numbers by management personnel. 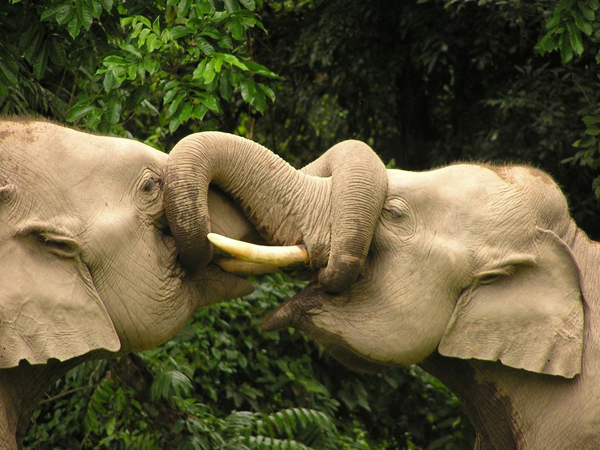 “Information needs to be gathered on an annual basis because managers need to act immediately, and they need to link it with the trade in legal versus illegal ivory. Additionally, poaching is never a systematically executed annual feature; it most often happens in spurts in response to protection levels and demand,” Desai said.

He goes on to add, “The model will be helpful if you get good data on a population, and then wait 5 or 10 years, and then gather data again and run. You would then be able to know the total ‘take off’ (i.e. poaching) during that period. This does not serve the current data needs of MIKE monitoring or a managers needs. But, you would be in a position to detect how much you are missing or managers are hiding – I mean assign responsibility.”

Overall, the model provides an alternative approach that managers may use for estimating the number of elephants poached over a long period of time. The model can be modified in many ways, and could be used for monitoring numbers of other animals whose populations need to be modeled, especially those that are poached illegally for different reasons. 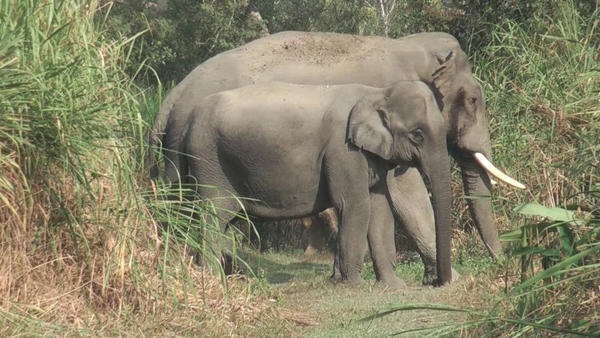 This photo illustrates sexual dimorphism in the Asian elephant. Males have tusks while females don’t. Photo by Karpagam Chelliah. 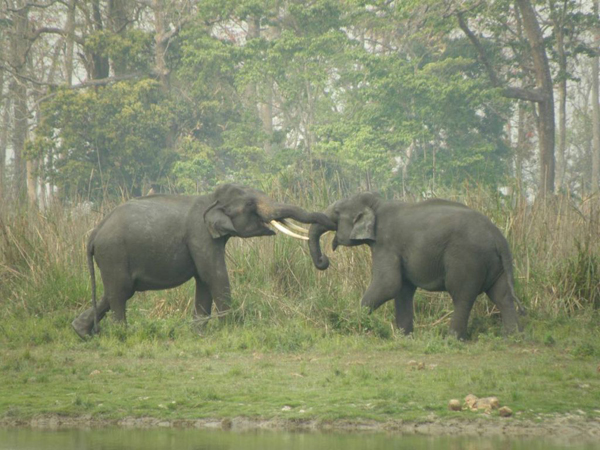 Two males, one tusker and one makhna, sparring. Photo by Karpagam Chelliah.