Safeguarding nine priority areas could protect all of Tanzania’s primates

Researchers at the Wildlife Conservation Society (WCS) have recently developed a list of “Priority Primate Areas” to save Tanzania’s many primate species from extinction. A hub of unique and endangered primates, Tanzania is widely considered to be the most important mainland country for primate diversity in Africa. Approximately a third of the 27 primate species found in Tanzania are unique to the country, including the recently discovered kipunji.

Although “a range of general national-level priority setting analyses have been carried out in Tanzania” according to researcher Tim Davenport, this particular project was a species-specific national study to develop a comprehensive conservation tool for Tanzanian primates.

Researchers ranked and evaluated certain factors such as IUCN Red List assessments, primate distributions, and species irreplaceability in order to determine what they called “taxon conservation scores.” A score from zero to eight was then assigned each species, which allowed researchers to rank primates based on overall conservation urgency.

Notably, the results showed that adequate protection of just nine sites in Tanzania would protect all 27 Tanzanian primate species. These areas include national parks and forest reserves such as Kilimanjaro and Mgambo. However, Tanzania is experiencing the second highest rate of deforestation in Africa and the protection of the total 8,679 km2 of Priority Primate Area may prove harder than hoped.

The kipunji (Rungwecebus kipunji) is a prime example of the unique biotic character of Tanzania. Discovered by researchers in 2003, the kipunji was the first new primate genus to be discovered since 1923. But less than 1,000 of the Critically Endangered species exist and the population is largely fragmented. The species remains imperiled by illegal logging, charcoal production, poaching, and habitat fragmentation. Researchers assigned a taxon conservation score of 7.33 to the Kipunji species, which was the highest score of all.

Habitat and species conservation is merely one of a host of priorities for the Tanzanian government which, like many other developing nations, “grappl[es] with reconciling [its] development needs with biological conservation and the needs of wildlife,” according to James Duetsch, WCS Executive Director for Africa Programs. The Tanzanian economy is booming and some of the country’s main industries, such as precious metal mining and wood production, conflict with conservation concerns. Corruption within the government and even within conservation organizations such as the World Wildlife Fund (WWF) also stands in the way of ensuring adequate protection of the Primate Priority Areas. In 2012 the World Wildlife Fund returned $120,000 in misused funds to Norway.

Although the path to saving Tanzanian primates may be rocky, James Duetsch believes that this project has “global implications” because “science-based priority setting tools like this one are the best chance for developing nations to minimize biodiversity loss.” 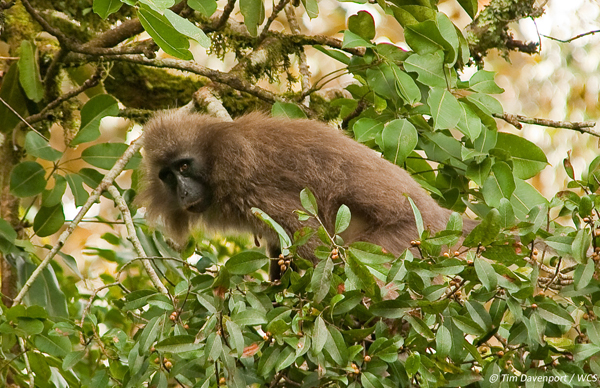 The new WCS study found that the most vulnerable primate was the ‘critically’ endangered’ kipunji, first discovered by WCS in 2003 and described by WCS as an entirely new genus in 2006 (Photo: Tim Davenport/WCS).

(05/22/2013) Famed anthropologist and conservationist Richard Leakey has proposed a possible solution to the hugely controversial Serengeti road: build an elevated highway. Leakey made the remarks during a conference at Rutgers University on May 14th, as reported by Live Science. The Tanzanian government’s plans to build a road through the remote, northern Serengeti has come under both environmental and international criticism, as scientific studies and leaked government reports have found the proposed road would hugely hamper the world famous migration across the plans.

(07/26/2013) The world’s highest deforestation rate, the execution of eight environmental activists including a Nobel Peace Prize nominee, and ongoing turmoil surrounding oil operations in the Niger River Delta has created a notoriously disreputable environmental record for the West African country. Now, a new threat is rising in the already-compromised forests of Nigeria: illegal marijuana cultivation.

Building a new generation of local conservationists: how improving education in Uganda may save one of the world’s great forests

(06/20/2013) Conservation work is often focused on the short-term: protecting a forest from an immediate threat, saving a species from pending extinction, or a restoring an ecosystem following degradation. While short-term responses are often borne of necessity, one could argue that long-term thinking in conservation and environmental work (as in all human endeavors) is woefully neglected, especially in the tropics. This is why programs like the Kasiisi Project are so important: by vastly improving education for primary kids near a threatened park in Uganda, the project hopes to create a “generation of committed rural conservationists,” according to founder and director, Elizabeth Ross.