In the unforgivingly cold, arid and harsh high-altitude regions of Central Asia, nomadic herders have survived for several centuries. Guided by a keen understanding of the environment they live in, they move constantly with their livestock, following trails of fresh pastures and ‘settling down’ only briefly. Surrendering their destiny to the whims of nature, these free spirited wanderers seem unshakeable. But over the last 50 years, several changes have jolted the lives of one such group of nomads living in the high-altitude trans-Himalayan rangelands of Ladakh in the state of Jammu and Kashmir in northern India – the Rupshu pastoralists.

In a new study published in the journal Pastoralism: Research, Policy and Practice, researchers have documented how events such as the immigration of Tibetan refugees, the Indo-China war of 1962, as well as post-war developmental policies of the government, have brought about major transformations in their traditional patterns of movement and pasture-use, along with an increase in the livestock numbers. These changes have, in turn, had an impact on the native wildlife of this region.

“It was not a planned study,” says Navinder Singh, associate professor in Wildlife Ecology at Swedish University of Agricultural Sciences, and lead author of the study. “I lived with these pastoralists for four summers and two winters. While chatting with them, several issues started to emerge. There were concerns about warming of climate, that there wasn’t much grass left, and that wildlife was over-grazing. We felt that the behavior of these people needed to be known since it eventually affects the wildlife.” 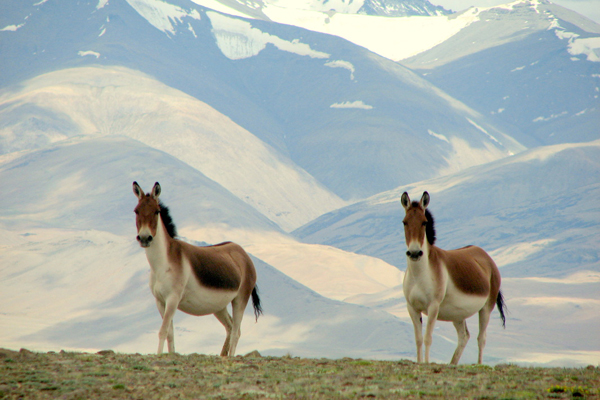 Thus the researchers set out to unravel the complex dynamics between the different stakeholders in the system – the wildlife, the pastures, the government and the pastoralists themselves.

The team began by conducting 80 interviews with Rupshu pastoralists, Tibetan refugees and government officials of the Wildlife Protection, Sheep Husbandry and Animal Husbandry Departments between 2004 and 2008. They asked them questions such as how things had changed after the Indo-China war, the time of the year they started migrating, how many days they spent at a camping location, as well as details about family size and livestock numbers.

From these interviews and records of livestock data, the researchers etched out the course of changes in these pastoralists’ lives.

One of these major changes occurred as a result of China’s occupation of Tibet in 1951, when several Tibetan pastoralist refugees arrived in India through Ladakh, with thousands of livestock. As a result, the Rupshus had to divide their already meager pastures.

“They did this willingly at first. But with increasing populations on both sides, there is now some resentment brewing among the Rupshus,” says Yash Veer Bhatnagar, Director at Snow Leopard Trust-India and part of the team.

“[This], I think, is because the refugees have a lot more animals, and larger holdings”, adds Singh. 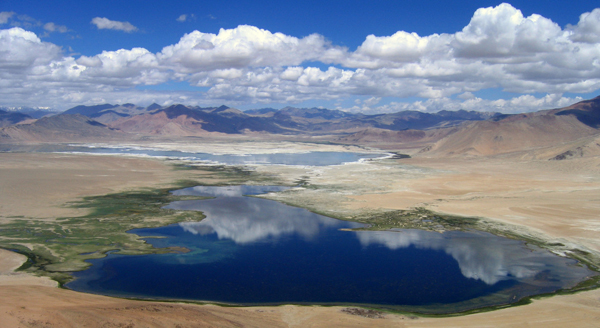 A vista of the study area. Photo by Navinder Singh.

Then, came the war between India and China in 1961-62. As fallout from the war, a part of the traditional winter pastures of the nomads near the Tibetan border was lost to China. The nomads thus had to cut down the size of their available pastures considerably, and these limited pastures were now being split for use at different times of the year. This disrupted their centuries-old patterns of migration, in which the herders moved based on the pasture quality and made sure that these pastures were rested sufficiently. Loss of pastures was accompanied by an almost tripling of the number of households since 1950s (augmented by the immigration of the Tibetan Refugees), and more than doubling of the livestock, according to the study’s authors.

“Post war grazing was more intense and the rangelands of Indian Changthang began seeing more pressure than ever before in recent history,” explains Bhatnagar. “Sometimes the nomads are frustrated that we aren’t able to recover these pastures back from the Chinese.”

The war had another important effect. The import of high-value cashmere wool from Tibet to Ladakh almost stopped. To counter this, the Jammu and Kashmir government initiated several strategies to boost the commercialization of cashmere in Ladakh, shifting the focus to increasing cashmere producing goats. 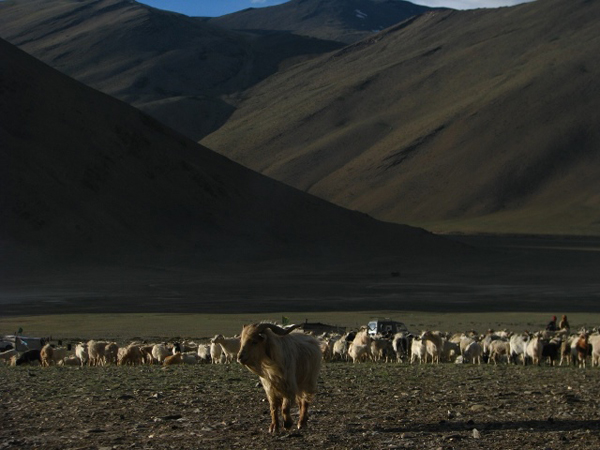 The Rupshu valley with livestock. Photo by Yash Veer Bhatnagar.

The government also instituted other facilities such as providing supplementary food during winters, better health care, provisions and subsidies, as well as vaccination and welfare for livestock. With these changes and an increased exposure to better jobs, education and health avenues, the nomadic pastoralists have been increasingly opting for a sedentary lifestyle.

“They’re getting tired of moving all the time, leaving things to climate,” says Singh.

Such changes in lifestyle have further improved and increased the population of the herders and their livestock.

As a result of these changes, however, native wildlife in the region has primarily suffered.

For example, researchers observed the use of pasture by livestock compared to an important native wild herbivore of the region, the Tibetan argali (Ovis ammon hodgsoni) a wild sheep, which is currently listed as Near Threatened by the IUCN Red List. They found that the core areas used by argali, and the livestock had a clear separation. This, the authors suggest, could be due to exploitation of resources by livestock during winter, resulting in lower forage availability for argali during summer.

The researchers also found that for the pastoralists, the kiang (Equus kiang) – largest of the wild asses – is a major competitor for food. 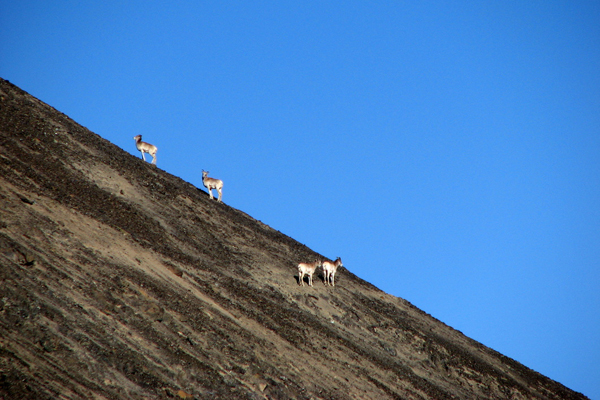 Tibetan argali in the study area. Photo by Navinder Singh.

“I think this is because these pastoralists live by the lake, and the kiangs are also mostly distributed around these lakes,” says Singh. “So the pastoralists see them all year around, and perceive them as possibly competing with them.”

With limited pastures to feed from, the perception of competition has escalated. “The problem now is that in winters there is increased snow and less food, and so they think that the kiangs are competing even more,” he says.

In fact an iconic wild species, the Tibetan gazelle (Procapra picticaudata) or Goa, went locally extinct in this region due to hunting pressure in the 1980s. The gazelles, listed as Near Threatened by the IUCN Red List, may not have been able to recover due to the increased livestock grazing, the authors write.

The rise in demand for cashmere or pashmina has also impacted native wild herbivores. In order to improve profits, the herders have been changing their livestock composition in favor of more cashmere-producing goats. Since these goats eat almost anything, every inch of pastoral land is looked upon as a resource to increase cashmere production. The intolerance towards competing wild animals, such as kiangs, has thus been increasing.

The predators in this landscape are also in trouble. The rise in domestic livestock and reduction in native herbivores has increased livestock depredation by Tibetan wolves (Canis lupus chanco). It is thus not surprising that the attitude towards wolves is usually negative here.

The authors also write that the increasing sedentarization of pastoralists, compounded by increasing livestock populations have resulted in higher grazing pressures, causing problems such as pasture degradation, forage depletion, and other ecological impacts such as reduced plant cover, modification of plant species composition, and increased erosion.

Singh views this changing lifestyle with apprehension. “I think the reason this [nomadic] lifestyle has survived for centuries is because it was an efficient one where you used your resources sustainably,” he says.

Although for the Rupshu pastoralists the transition from a nomadic lifestyle to a sedentary one has been a long time coming, reclaiming their destiny from the whims of nature has come at a cost: one that could be frighteningly large. 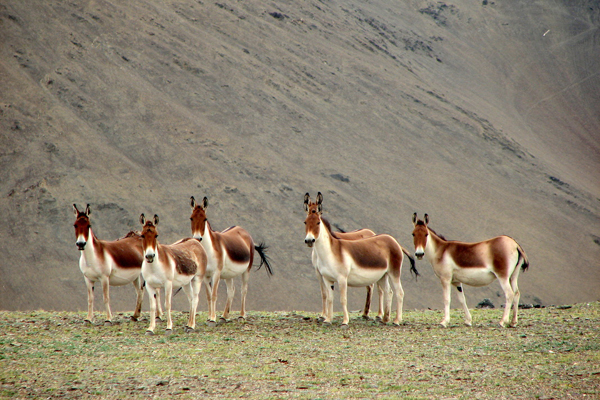 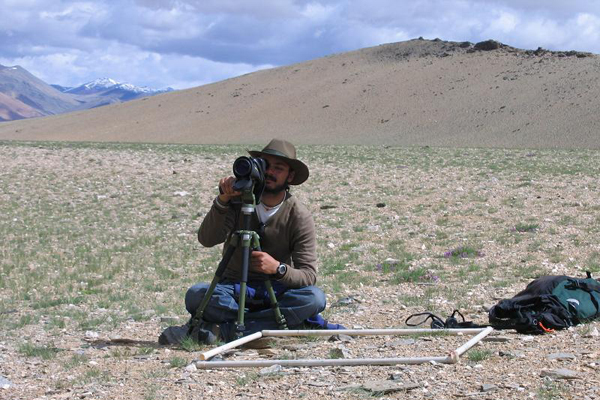 Navinder Singh in the field. 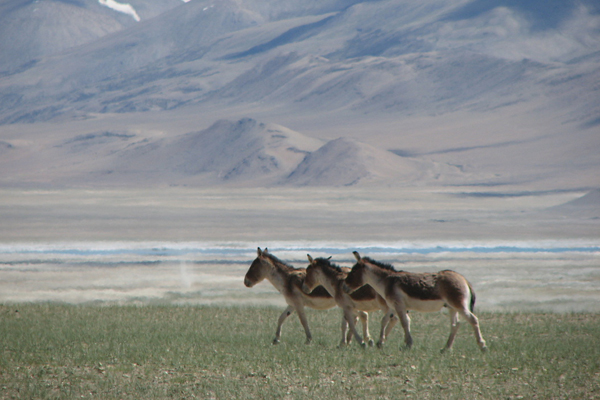 (07/25/2013) Snow leopards, wild yaks and other iconic wildlife on the world’s highest mountains and great steppes are becoming “fashion victims” of the surging global trade in cashmere, new research has revealed. Scientists found wildlife being driven to the margins of survival by the “striking but unintended consequences” of huge increases in the numbers of the goats producing the luxurious lightweight wool.

(03/18/2013) Getting local people to become invested in wildlife conservation is not always easy, especially in parts of the world where protected areas are seen as taking away natural resources from local communities. This tension lies around Gonarezhou National Park in Zimbabwe, where a growing population of livestock herders competes with wildlife.