Fishing communities on Agatti Island in Lakshwadeep, India, blame their reduced fish catch on green turtles; according to them, green turtles chomp their way through the seagrass beds lining the shallow reef waters that are essential for fish to breed. This leads some in the community to clandestinely kill sea turtles and destroy their nests.

Wildlife happens to intrude on human “space” mostly while searching for food, and this can result in human deaths, or destruction of human livelihood. The perception of people living close to wildlife in such conflict areas shapes the interaction between them and the wildlife.

Certainly, Agatti’s fishing community attributes the drop in fish catch to green turtles, but is this perception accurate? Rohan Arthur and others from the Nature Conservation Foundation, based in Mysore, India, surveyed perceptions of fishers from two places in the Lakshwadeep islands: Agatti and Kadmat. Both are atolls – ring shaped coral reefs with a rim that encircles a lagoon – and both share similar characteristics: size, population, number of households, number and density of fishers, and extent of seagrass meadows. Also, importantly, fish catch had declined in the lagoons of both atolls.

The only difference between the two atolls is the number of resident green turtles. The number of green turtles around Agatti has increased tremendously since the 1970s, due to effective conservation measures in the area. In 2010, the turtle density in Agatti was six to seven times the turtle density in Kadmat (27 turtles per square kilometer of seagrass meadow to 3 turtles respectively).

People’s perceptions in both atolls were remarkably different. In Agatti, almost 75% of respondents felt decrease in fish catch was due to green turtles. In Kadmat, less than 20% thought green turtles were responsible. Instead they pointed to a variety of factors, including overfishing. 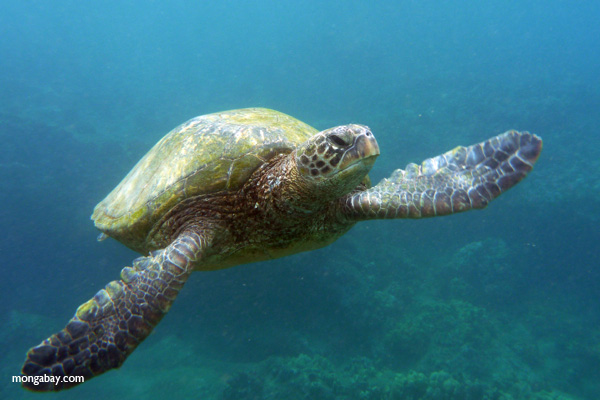 Fishers in Agatti, however, thought green turtles reduced fish catch in two ways. According to them, green turtles hurt their livelihoods firstly by “direct” damages, such as tearing nets, breaking lines, or driving fish away from nets and thus reducing catch. Secondly, Agatti fishers proposed that turtles at high densities eat up a lot of the seagrasses, reducing habitat available for the fish through “indirect damages.” Adult fish from the coral reefs do not like overgrazed meadows, and fewer young fish settle down in them.

The researchers decided to test this claim. Their own monitoring shows that when turtles occur at very high densities, such as in Agatti, seagrasses are eaten much faster than they grow. Then they compared “natural exclosures” – seagrass beds enclosed by coral branches, which turtles cannot reach – with open seagrass beds outside. In Agatti, there were three times more seagrass shoots in the exclosures ensconced by coral branches. Outside in the open sea, 80% of the seagrass shoots had turtle graze marks.

Shifting residence: turtles on the move

It so happened that the study period included a period of transition in turtle numbers. Up to 2010, turtles were concentrated around Agatti. But in 2011, the turtles shifted residence from Agatti to Kadmat.

Nachiket Kelkar, a co-author on the study who has been monitoring seagrasses and turtles in Lakshwadeep over the last few years, says, “We don’t have conclusive proof like satellite tracking to prove that this shift happened; but, the changes in abundance were so drastic. Within a period of 1-2 months, Kadmat was full of turtles and Agatti had very few. We were also monitoring two other islands, Kavaratti and Kalpeni around this time, and their turtle numbers seemed more or less the same. So it is very likely that there was an actual shift.” 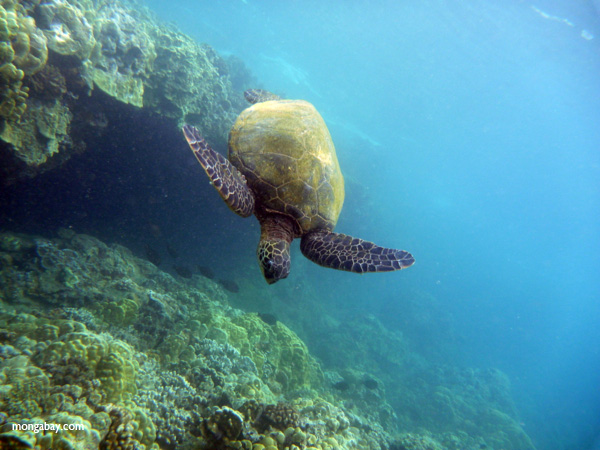 Kartik Shanker from the Centre for Ecological Sciences at the Indian Institute of Science has worked extensively in and around Lakshwadeep, and was not involved in this study. He felt this residence shift to be a “reasonable working hypothesis,” and also said that the movement is probably due to declining food availability.

“However, this raises questions like how they know when to leave, and where to go; especially because, in the Lakshadweep, it is quite a distance to the next atoll and there is nothing in between,” he said.

Since the study period included this transition phase, the researchers could compare the density of turtles, the health of the seagrass canopy and the number of fish, before and after the population shift, in both Agatti and Kadmat. They found that seagrass canopy height fell drastically when turtle numbers went up.

Also, before the turtles shifted to Kadmat, there were 12 times more fish in Kadmat than in Agatti. The evidence was there – the numbers supported the perception that sea turtles were to blame for falling fish catches in Agatti.

Next, researchers tallied how much sea turtle grazing cost fishers. Using measures of catch per unit effort, number of days spent fishing, and market prices, they could arrive at a cost for “earnings from the fish stocks lost due to seagrass habitats being grazed by the turtles,” as Nachiket Kelkar describes it. The total amount came to as much as USD $887 per fisher per year.

“I think this estimate is roughly O.K., as a first level approximation. There are probably many assumptions but a more precise estimation would require a greater engagement with the fisheries sector, which researchers are working on now,” said Kartik Shanker.

This puts people’s perceptions in an entirely new perspective: Agatti fishers had figured out the rather complex way in which green turtles were indirectly affecting their fish catch. In this story, direct damage by green turtles, such as battered nets, is minimal; however indirect damage is sizeable. However, government compensation schemes tend to focus on direct damages, the most “visible manifestations of conflict,” as the authors write in the paper. The fisher’s perception is often dismissed as baseless.

This also explains why conflict resolution programs that provide compensation and insurance schemes sometimes turn out to be ineffective: these look only at “direct” losses incurred. Indirect losses are difficult to quantify, but, according to the authors, it’s important for conservationsits to engage with local communities and test perceptions.

Green turtles have made a miraculous recovery in the Lakshwadeep. But undoing effective conservation schemes by alienating the people living with them – the most important players in the story, and the most affected – could unravel decades of work and lead to a backlash against wildlife.

To resolve the problem, seagrass meadows need to be conserved, and fish protected from human induced stresses like dredging and pollution. Managers can also shift fishers to non-seagrass species, for as long as turtles are grazing. Collaboration can bring down conflict, and it works better when conservationists take local insight into account. 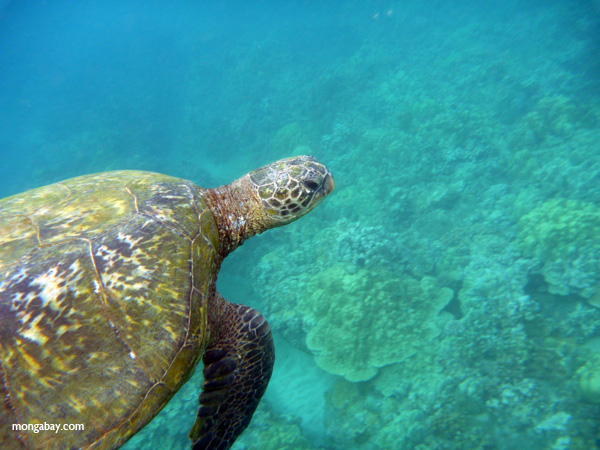 Telling the story of the father of sea turtle conservation

(01/21/2013) In 1959, visionary Archer Carr founded the world’s first conservation group devoted solely to sea turtles. Working with these marine denizens in Costa Rica, Carr was not only instrumental in changing local views of the turtles—which at the time were being hunted and eaten at unsustainable rates—but also in establishing basic practices for sea turtle conservation today. Now a new film by Two-Head Video, Inc. tells the story of Carr’s work and the perils still facing marine turtles today.