The Yukon Flats area of Alaska is today burning more frequently and severely than it has in the last 10,000 years, according to new research published in the Proceedings of the National Academy of Sciences (PNAS). Looking at charcoal fragments from 14 deep lakes in the region, scientists were able to reconstruct the fire history of this particular forest, which covers around 2,000 square kilometers. Scientists have long warned that as the temperature worldwide continue to rise from climate change, wildfires are likely to become more common.

“From what we can tell, the fire frequency at present is higher than it has been at any time in the past 10,000 years,” says lead author Ryan Kelly, a doctoral student with the University of Illinois.

The current fire frequency is even surpassing what was seen during the Medieval Warm Period (circa 950 to 1000) when temperatures in parts of the northern hemisphere were similar to today.

“This period probably wasn’t really as warm as today, definitely not as warm as it’s bound to get in the future, but may be the most similar to today,” Kelly explains. “There was lots of burning, almost as much as today, and the fires were particularly severe.”

But fire in the region today appears unprecedented. In the past 3,000 years, nine to ten fires occurred on average every thousand years; but in the last fifty years alone that number has doubled to 20 fires every thousand years and the area has become “characterized by exceptionally high fire frequency and and biomass burning,” according to the paper.

The sudden high frequency of fire is actually reshaping this particular ecosystem: burned boreal forest—made up largely of conifers—are being replaced by deciduous woodlands. Deciduous trees withstand fire better and scientists are already observing deciduous trees replacing the black and white spruce that has dominated the area for thousands of years.

The researchers say that what’s happening in the Yukon Flats could be a warning sign for other boreal regions.

“We chose this area because today it is one of the most flammable boreal ecoregions of North America,” says co-author Feng Sheng Hu also with the University of Illinois. “So we are focusing in an area that is highly flammable and we are focusing on periods of climate fluctuation during the Holocene. We’re trying to figure out what happened in the past to help us to project what may happen in the future.”

Not only are the frequent fires changing an ecosystem, but they could also be creating a positive feedback cycle whereby ancient carbon in the soil is released into the atmosphere. In this case, the warmer the Earth becomes, the more carbon will be released by boreal soils exacerbating climate change. Scientists have come to refer to the boreal as a possible “carbon bomb.”

“There is more carbon in the boreal forests than in the atmosphere,” explains Kelly. “And one of the main ways that the carbon that’s accumulated over thousands of years gets out of the soil is through burning.” 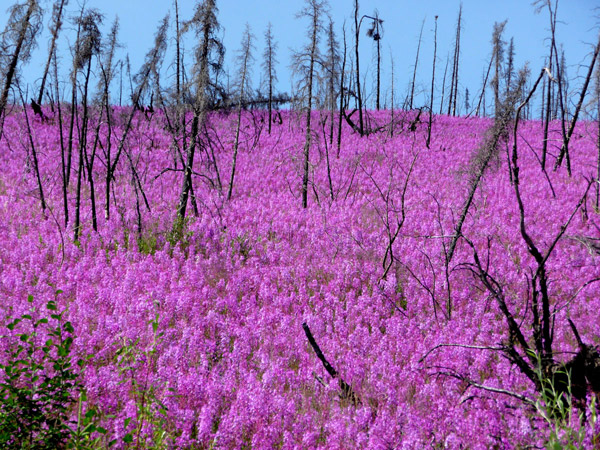 Fireweed adds brilliant color to the Yukon Flats. Fireweed, as its name suggests, only grows after an area has burned. Today the Yukon Flats appears to burning twice as frequently as anytime in the last 3,000 years. Photo by: Feng Sheng Hu.

(06/24/2013) After a colder-than-average spring, Alaska is suffering a sudden and record-breaking heatwave. Temperatures on Monday, June 17th hit a stunning 96 degrees Fahrenheit (35 degrees Celsius) in Talkeetna, Alaska, just below the state’s highest temperature ever record of 98 degrees Fahrenheit in 1969. On the same day, NASA’s Terra Satellite’s Moderate Resolution Imaging Spectroradiometer (MODIS) took a rare image of a cloud-free Alaska.