The research is based on observations collected in two tropical forests: a seasonally dry forest on Panama’s Barro Colorado Island and a “rainforest” with year-around precipitation in Luquillo, Puerto Rico. The authors, led by Stephanie Pau, currently at Florida State University but formerly from UC Santa Barbara, analyzed the impact of changes in temperature, clouds and rainfall on flower production. They found an annual 3 percent increase in flower production at the seasonally dry site, which they attributed to warmer temperatures.

The findings lend support to other research suggesting that tropical forests are seeing significant changes from small climate shifts.

“Tropical forests are commonly thought of as the lungs of the Earth and how many flowers they produce is one vital sign of their health,” said Pau in a statement. “However, there is a point at which forests can get too warm and flower production will decrease. We’re not seeing that yet at the sites we looked at, and whether that happens depends on how much the tropics will continue to warm.”

“With most projections of future climate change, people have emphasized the impact on high-latitude ecosystems because that is where temperatures will increase the most,” Pau continued. “The tropics, which are already warm, probably won’t experience as much of a temperature increase as high-latitude regions. Even so, we’re showing that these tropical forests are still really sensitive to small degrees of change.” Canopy of the Panamanian rainforest

Other studies have found evidence of increased growth rates in tropical forests, which some have attributed to the fertilization effect from elevated atmospheric carbon dioxide concentrations. For example, a paper published in Geophysical Research Letters in May reporting “greening” in dry regions due to carbon dioxide fertilization. But that research added that rainforests are unlikely to see big increases in bioaccumulation.

“Leaf cover in warm, wet places like tropical rainforests is already about as extensive as it can get and is unlikely to increase with higher CO2 concentrations,” explained a statement from the American Geophysical Union, which publishes Geophysical Research Letters. “In warm, dry places, on the other hand, leaf cover is less complete, so plants there will make more leaves if they have enough water to do so.” 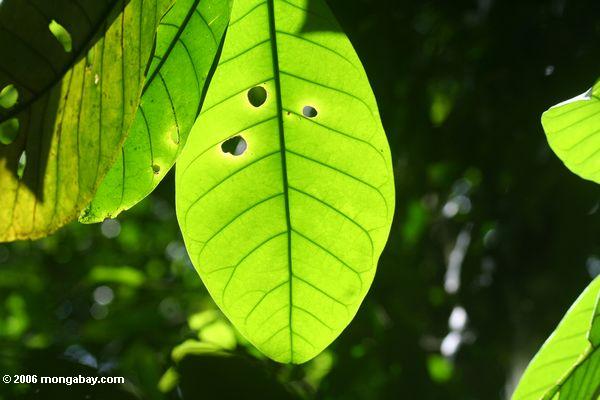 Still other studies, including a 2007 paper published in Ecology Letters by a co-author of the current Nature Climate Change paper, indicate that rising temperatures could eventually lead some tropical forest trees to hit a wall, where growth slows or even reverses due to increased respiration.

Amazon deforestation could trigger drop in rainfall across South America

(09/06/2012) Deforestation could cause rainfall across the Amazon rainforest to drop precipitously, warns a new study published in the journal Nature. Using a computer model that accounts for forest cover and rainfall patterns, Dominick Spracklen of the University of Leeds and colleagues estimate that large-scale deforestation in the Amazon could reduce basin-wide rainfall 12 percent during the wet season and 21 percent in the dry season by 2050. Localized swings would be greater.

Lessons from the world’s longest study of rainforest fragments

(08/15/2011) For over 30 years, hundreds of scientists have scoured eleven forest fragments in the Amazon seeking answers to big questions: how do forest fragments’ species and microclimate differ from their intact relatives? Will rainforest fragments provide a safe haven for imperiled species or are they last stand for the living dead? Should conservation focus on saving forest fragments or is it more important to focus the fight on big tropical landscapes? Are forest fragments capable of regrowth and expansion? Can a forest—once cut-off—heal itself? Such questions are increasingly important as forest fragments—patches of forest that are separated from larger forest landscapes due to expanding agriculture, pasture, or fire—increase worldwide along with the human footprint.