An international cement company Lafarge, winner of a Green Initiative award, is considering quarrying a cave in Malaysia which is the sole home of a critically endangered species. The proposed operations also threaten a Buddhist monastery near the cave where monks are facing eviction.

Kanthan cave in Peninsular Malaysia is located in a limestone hill, already extensively quarried for the production of cement by Lafarge. The cave, just as most karst caves in Southeast Asia, harbors a unique ecosystem. One of the rare endemic organisms is the Kanthan Cave trapdoor spider (Liphistius kanthan), which was just designated as Critically Endangered by the IUCN Red List. It is found nowhere else in the world.

One reason why few people care about threats to cave-dwelling animals is that most of them are not exactly cuddly: spiders, snails, snakes, millipedes. According to Liz Price, an expert on caves of Malaysia, few people are concerned about endemic fauna on the hill.

“It’s almost impossible in Malaysia to save anything! Even big mammals are suffering from poaching, so of course no one cares about ‘creepy crawlies’,” says Price.

Another potential loser from this quarry would be the monks from a Buddhist monastery located at the base of the hill, near the cave entrance. If the project goes through, the monastery, as well as nearby Taoist and Hindu temples will be completely destroyed. Monks and worshipers will be left out on the street.

“The monks have given up their lives, so it is a bit difficult to leave,” a representative from the temple committee, who asked to remain anonymous, told mongabay.com.

Just recently, Lafarge has placed numerous signs around the hill trying to deter visitors and warning about upcoming works. “This is very rude,” the representative from the temple committee said. “People are afraid to come to the temple for worship.”

The representative added that Lafarge was in direct negotiations with the monks and had promised to come up with a “proposal” for the future of the monastery. No further details were available about what that proposal might contain. 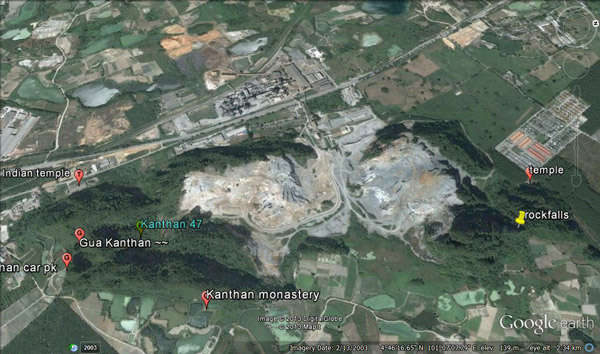 Kanthan hill in North Peninsular Malaysia is already extensively quarried. Further digging would destroy both the Kanthan cave and the monastery and temples in the hill.

The locals – temple people, farmers and fishpond operators – have been given conflicting information about the future of the hill. Earlier this year, they were told that blasting would start on 1 June 2013 and that they should get out. But apparently in April, Lafarge stated that they would not move into that area until 2015.

Mongabay.com spoke on the phone with a Lafarge representative from Kuala Lumpur, who declined to answer any questions about the project. [Editor’s note: Lafarge responded after this article was published]

None of the blasting has taken place inside the cave or the monastery yet. According to the latest reports from the area, the local government has currently put the project on hold until an Environmental Impact Assessment has been completed. Nonetheless, Lafarge already owns the lease for the territory of the entire hill.

A 1999 World Bank report on limestone resources management suggests that sites chosen for cement quarries should be in areas that are already disturbed or degraded. Caves should be avoided because of the endemic species that likely live there. Such criteria are yet to be explicitly adopted in corporate policy.

In 2001 Lafarge Malayan Cement was presented the Enterprise Governance Award for Green Initiative by the Malaysian Business and the Chartered Institute of Management Accountants. In an ambitious 2012 Sustainability Report, Lafarge states that it is working to “protect and promote biodiversity at its sites” among other promises for sustainability and corporate responsibility. 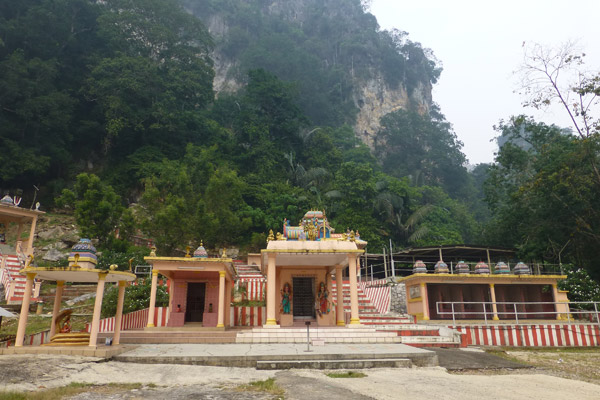 A small Hindu temple on the north side of Kanthan hill. Photo: Liz Price. 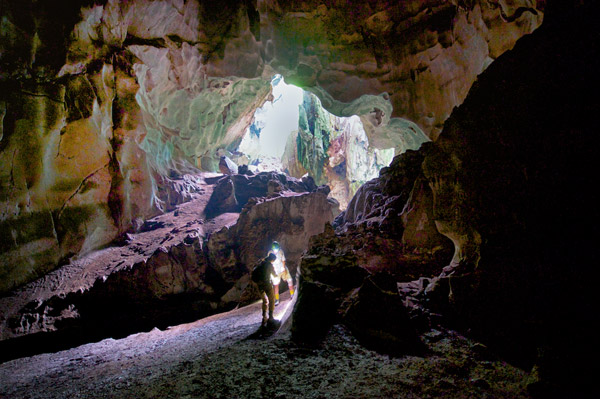 Cavers explore the biodiversity in Kanthan cave while they still can. Photo: Bjorn Olesen. 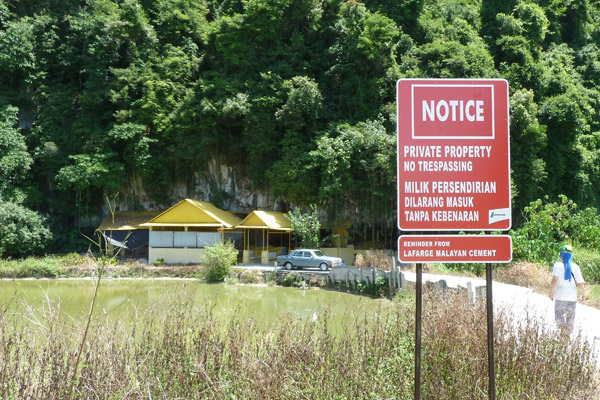 ‘No trespassing’ sign placed by Lafarge on the way to the Chinese temple in the base of Kanthan hill. Photo by: Liz Price.

More information about a similar project in the region: Caving into Development by By Tan Cheng Li for The Star, Malaysia (16 July 2013).

(05/29/2013) Scientists have discovered two new species of short-tailed whipscorpions (in the order Schizomida) in limestone caves in Brazil, according to a new paper published in PLoS ONE. The new species—dubbed Rowlandius ubajara and Rowlandius potiguara—add new knowledge to a group of arachnids that is little known in South America outside of the Amazon.

(01/07/2013) The South China Karst region resembles a lost world with its stone forests and towering limestone formations that look like petrified skyscrapers. Standing at the edge of one of the region’s many vine-covered gorges, you could picture an apatosaurus lifting its head above the mist that blankets the gorge floor. Of course, that would be impossible, but what botanists recently found in the region was only slightly less surprising (to botanists). Near the back of a limestone cave, pink flowers bloomed on a newly discovered nettle that could survive on just a tiny fraction of the sunlight other plants receive. As Ian Malcolm in Jurassic Park said, “life will find a way.”

(02/22/2012) It’s not the prehistoric monsters from the Jules Verne’s Journey to the Center of the Earth or the human-bat hybrids of The Decsent, but it’s an astonishing discovery nonetheless: intrepid scientists have discovered the world’s deepest surviving terrestrial animal to date, a small wingless insect known as a springtail. Explorers discovered the new species, Plutomurus ortobalaganensis at a shocking 1.23 miles (1.98 kilometers) below the surface. The species was discovered by the Ibero-Russian CaveX Team Expedition in Krubera-Voronja Cave, the world’s only known cave to go deeper than 2 kilometers.