An Australian bushman and naturalist claims to have captured video footage of the night parrot, a bird not seen alive for more than a century.

John Young, who describes himself as a wildlife detective, showed the footage and a number of still photos of the bird to a packed room of enthusiasts and media at the Queensland Museum on Wednesday. The desert-dwelling night parrot, Pezoporus occidentalis, has never been photographed and the only evidence of its continued existence has been two dead birds found in 1990 and 2006.

Wildlife authorities and birders responded to the sighting with excitement, saying the evidence supporting Young’s claim was overwhelming.

“It’s incontrovertible. He’s got stills, he’s got moving videos and he’s got feathers,” he said.

Decimated during the 19th century by introduced cats and foxes, the night parrot’s population plummeted and it fell out of the scientific record until 1990 when a dead bird was found by a roadside in southwest Queensland.

Throughout the next two decades, many naturalists ventured into the vast Australian desert attempting to confirm the bird’s continued existence and the nocturnal parrot began to develop a mythological reputation.

Young’s quest to find the parrot started 15 years ago. During that time he spent 17,000 hours in the field, camping in some of the most remote places in Australia’s dry, inhospitable interior.

In 2007, doubt was cast on a previous claim by Young to have discovered a new species of fig parrot. Some experts accused him of doctoring his photos to make the species appear to be novel. He says he has hundreds of photos and 17 seconds of video of the night parrot.

“There’s absolutely no doubt. I’ve made mistakes before but I won’t do it again,” said Young.

He has refused to make public the precise location of the find, somewhere in Western Queensland, in order to preserve the security of the habitat. His photographs and footage were unavailable due to a deal with a media company.

“Among birdwatchers the night parrot has a sort of legendary status,” he said.

Fowlie said the current estimate of the population was between 50 and 250 night parrots but, due to its elusive nature and the size of the potential habitat, there may be many more.

He said the sighting was a wonderful opportunity to conserve the species. 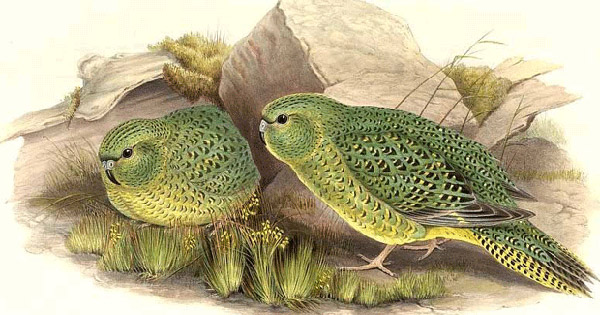 (07/15/2013) Written by Tom Stephenson and Scott Whittle, with illustrations by Catherine Hamilton, The Warbler Guide by Princeton University Press is the “go-to” guide for identifying the 56 species of warblers in the United States and Canada. Warblers are notoriously difficult to identify. These champion singers are small, hidden amongst the tree top canopy, flighty and dancing from branch to branch, with variegated coloring blending greens, yellows, reds, browns, and grays.

(06/30/2013) The Great Indian Bustard, one of India’s iconic birds, once ranged across most of the Indian subcontinent. Due to a variety of factors, however, the Great Indian Bustard is also now India’s rarest bird and faces imminent extinction. The following is an interview with Ramki Sreenivasan, co-founder of Conservation India, a group that recently petitioned the Rajasthan Chief Minister to kick start “Project Bustard.”

(06/26/2013) A previously unknown species of bird has been found hiding in plain sight after scientists photographed what was thought to be more abundant species at a construction site on the outskirts of Phnom Penh, Cambodia’s capitol and largest city. Subsequent analysis revealed the species to be distinct.