In the next few months, the beating of fragile fiery orange and black wings will transport the monarch butterfly south. But the number of monarch butterflies (Danaus plexippus) reaching their final destination has steadily declined, dropping to its lowest level in two decades last winter, according to a recent survey.

The insect’s journey begins in late summer and August, when monarchs fly from Canada and the Northeastern U.S. to highly selective overwintering sites in Mexico. Individually weighing less than a paperclip, monarch butterflies employ an inherited compass to make the longest insect migration in the world, flying up to 4000 kilometers (2,485 miles) to reach their final destination by November.

The monarchs gather in central Mexico’s mountainous forests in massive numbers, up to 50 million per hectare in only a dozen or so colonies. The monarchs create clusters on the trunks and branches of coniferous trees, filling the skies with orange. It is in this small monarch forests where scientists estimate population size. A survey conducted by the WWF-Telcel Alliance and Mexico’s National Commission of Protected Areas use the percentage of wintering forest inhabited by the monarch butterflies as an indicator, representing the number of butterflies that arrive in the country each winter to hibernate. 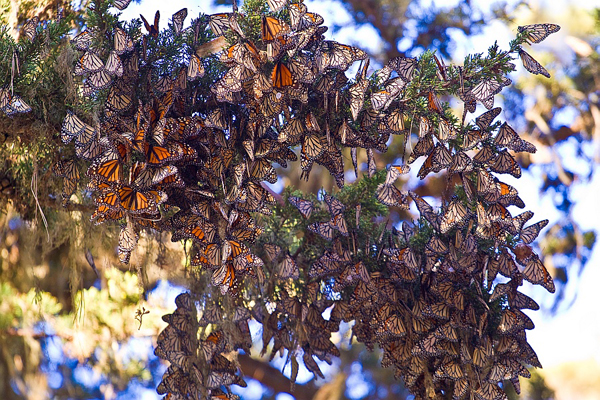 “As monarchs arrive to their hibernation forests in Mexico, we locate the sites where these butterflies group together to form colonies,” Eduardo Rendon told mongabay.com. Rendon is the monarch butterfly program director with WWF.

The survey was conducted in five hibernation colonies inside Mexico’s Monarch Butterfly Biosphere Reserve and four colonies outside the reserve.

“We measure the colony’s fringes and calculate the occupied area through a geographical information system,” Rendon adds.

The most recent 2012-2013 winter survey indicated only 1.19 hectares (2.95 acres) were occupied, a dramatic 59 percent decrease from the previous year’s survey.

Rendon believes the decrease of monarch butterflies in Mexico may be related to the severe heat and drought of 2012 across much of the monarch’s summer range. The climate fluctuation may have reduced the monarch’s host plants and stressed the remaining insects.

Extreme temperature fluctuations during spring and summer can affect the survival and reproduction of butterflies, but climate is only one challenge. Monarch habitat across North America is disappearing, threatening the irreplaceable long-distance migration.

There is no single threat, said Craig Wilson, senior research associate within Texas A&M’s Center for Mathematics and Science Education and longtime butterfly enthusiast. “It is perhaps a deadly combination of climate change and human behavior.”

The U.S., Canada and Mexico contain regions in which monarchs breed, migrate or overwinter, making it essential each country supports monarch habitat along the entire migratory route.

It is the survival of the migration from Mexico through the U.S. to Canada and back that is special, Wilson noted. “The butterfly will survive, but this is one of the world’s greatest migrations and it is under threat.” 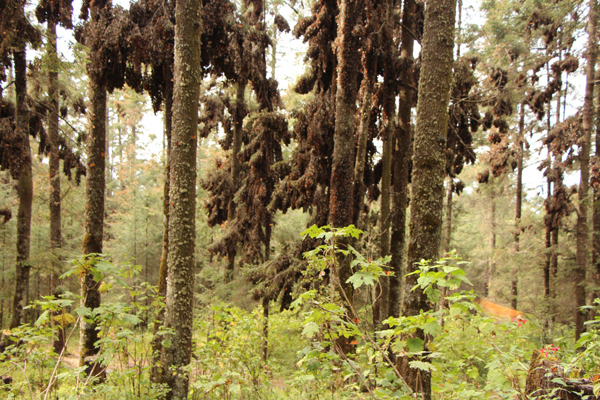 Milkweed, which grows in soy and corn fields in Midwestern U.S., is toxic to livestock and reduces agricultural production, and the increased use of glyphosate herbicide has wiped out the weeds growing in genetically-engineered, herbicide-resistant crops.

“We’re talking about hundreds of thousands of acres of land that are being sterilized, killing all nectar sources, killing all milkweed,” said Lincoln Brower, research professor of biology at Sweet Briar College. Brower has studied monarch butterfly biology since he was a graduate student at Yale University in 1954.

Scientists believe the use of herbicide has reduced milkweed availability nearly 58 percent, prompting a decrease in monarch births up to 81 percent in agricultural belt of the U.S. from 2009 to 2010.

In addition to the loss of milkweed, there is an obvious lack of flowering plants along the journey, an important resource for nectar and rest stops. 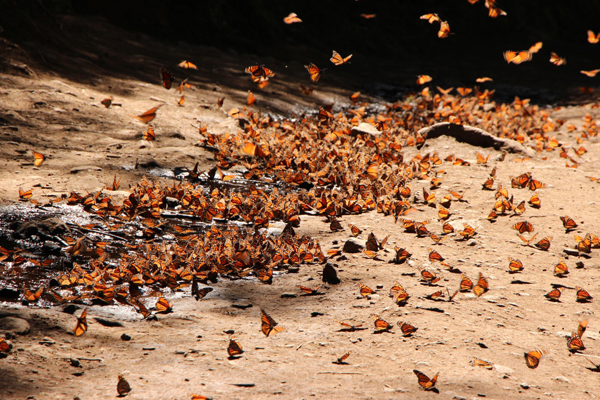 Monarchs drinking in a creek. Photo courtesy of WWF.

“During migration, monarchs stop to sleep and consume nectar that converts fats for energy reserve for the migratory journey,” Rendon said.

“The overwintering biology of the monarch is a period of quiescence [inactivity] at high elevation in the mountains of central Mexico on twelve separate mountain ranges,” Brower said.

The big problem in the past has been deforestation by illegal logging on a grand scale, Brower continued, but he believes the Mexican government has gone a long way in the last few years to mitigate the logging.

The pine-fir forest ecosystem, known as the oyamel fir forest, is essential to the survival of the monarchs. While the dense colonies of butterflies blanket the trees, the oyamel fir forest serves as a blanket and umbrella for the butterflies, providing shelter and microclimate conditions during winter rain and frost. Thinning the forest exposes butterflies to lower night temperatures and increases mortality during storms.

The area is primarily inhabited by agrarian communities that utilize the forest for resources, but conservation and sustainable management of the forests has evolved over the years. In 2000, the Monarch Butterfly Biosphere Reserve was created. The reserve is comprised of 56,000 hectares with complete or partial legal protection from logging, which includes cluster sites of monarch colonies.

“Although large-scale illegal logging has significantly reduced, we think there is still some small-scale logging,” Rendon said. “This could become a major threat if we are not able to continue providing economic alternatives to the local communities for them to see the benefits of keeping the forest intact.”

The monarch butterfly as a species is not yet endangered; it has a broad distribution throughout the world. But the unique North American migratory phenomenon is at stake, along with its distinct and mysterious navigational ability.

“This is all controlled by their brain, so that brain is comparable to a mega-computer,” Brower said. “You think about that, losing that incredible migration would be a real loss of potential knowledge in the future.” 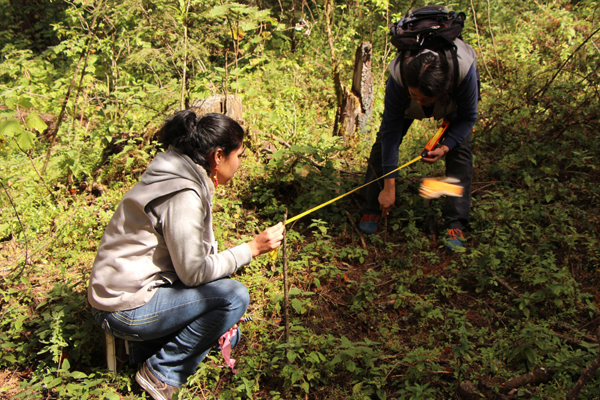 A monarch survey in action. Photo courtesy of WWF.

The butterflies annually traveling from Canada and the U.S. to Mexico are the third to fifth generation of the butterflies that left Mexico in early spring, Rendon explained. “We don’t know how they find exactly the same sites where their grand-grandparents clustered to hibernate the year before.”

The monarch butterfly is the only migrating insect, but there are many migrating birds. If Canada, the U.S. and Mexico can achieve some success in securing the monarch’s future, it is possible other migratory species could benefit, as well.

An educational outreach program based at the University of Kansas known as Monarch Watch encourages the creation of “Monarch Waystations,” where interested individuals plant milkweeds and nectar sources in home gardens, schools, businesses and beyond to offset the loss of food sources in agricultural fields.

“It may be a drop in the ocean but every bit, or bite, helps,” Wilson said.

While scientists are still hunting for answers, there is no question as to why experts should continue to investigate the monarchs’ international trek and establish or maintain current conservation strategies.

“That creature has an incredible migration and absolutely unique overwintering behavior of any animal on the entire planet,” Brower said.

Brower et al. (2011). Decline of monarch butterﬂies overwintering in Mexico: is the migratory phenomenon at risk? Insect Conservation and Diversity