The world’s highest deforestation rate, the execution of eight environmental activists including a Nobel Peace Prize nominee, and ongoing turmoil surrounding oil operations in the Niger River Delta has created a notoriously disreputable environmental record for the West African country. Now, a new threat is rising in the already-compromised forests of Nigeria: illegal marijuana cultivation.

Marijuana (Cannabis sativa) is a quick-growing and lucrative cash crop, promising hefty profit margins to growers who sell the buds of this psychotropic plant to black-market buyers. And while the marijuana trade certainly presents legal risks to those involved, it appears to be the risk to biodiversity that is getting high.

In 2012, The Southwest/Niger Delta Forest Project surveyed nine forest reserves to assess populations of the Nigeria-Cameroon chimpanzee (Pan troglodytes ellioti), a chimpanzee subspecies that is considered the most threatened of the four subspecies and is listed as Endangered by the IUCN Red List. During the survey, researchers had a first hand look at the effects of the marijuana boom. Half of the deforestation occurring in these reserves from 2010 to 2012 appeared to be the result of cannabis cultivation.

Concealed within the forest, marijuana growers clear-cut and often burn large patches of land to plant their crop. Because the plants need a full twelve hours of sunlight, the canopy and any competing plants must be removed completely. Habitat is immediately lost and the surrounding forest is weakened by edge-effects and increased foraging pressures from displaced wildlife. Additionally, crops often receive treatments of chemical fertilizers, herbicide, and pesticides, which can have deleterious effects on the surrounding ecosystem.

“Demand for the marijuana product is soaring,” Rachel Ashegbofe Ikemeh, Coordinator and Principal Investigator of the The Southwest/Niger Delta Forest Project, told mongabay.com. “Profits from marijuana crops can come in within 6 – 8 months of planting, fetching 2 – 3 times more money than could be gotten from cultivating other food crop…In an oil-dependent economy, teeming youth will be on the prowl for a means of livelihood.”

To address this threat, Ikemeh calls for state governments and land management departments to crack down on all forms of illegal encroachment of forests by enforcing existing policies and removing officials who are aiding or participating with marijuana growers.

“Illegal activities such as unauthorized logging and encroachment by farmers have flourished for years in many of these reserves and in many of these cases, government/forest managers may have looked the other way because it provided a means of livelihood for many of the region’s burgeoning population especially during trying economic times in the country,” Ikemeh adds. 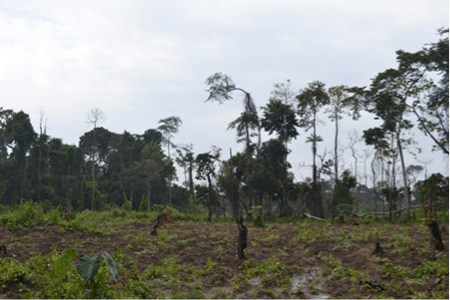 All photos taken in Ise forest reserve in November 2012 by Rachel Ashegbofe Ikemeh © 2013 – Project Coordinator and Principal Investigator for the Nigerian-Cameroon Chimpanzee Research and Conservation in SW Nigeria. Surveys have been supported by Rufford Small Grants Foundation (RSGF) and the African Wildlife Foundation (AWF), the Ondo State Ministry of Natural Resources, Department of Wildlife Conservation: Parks and Ecotourism including the Federal Department of Forestry.

Saving (and studying) one of Nigeria’s last montane forests

(07/26/2011) Between 2000 and 2010, Nigeria lost nearly a third (31 percent) of its forest cover, while its primary forests suffered even worse: in just five years (2000 to 2005) over half of the nation’s primary forests were destroyed, the highest rate in the world during that time. Yet, Nigeria’s dwindling forests have never received the same attention as many other country’s, such as Indonesia, Brazil, Malaysia, or Peru, even though in many ways Nigeria struggles with even deeper problems than other developing nations. Despite vast oil business, the nation is plagued by poverty and destitution, a prime example of what economists call the ‘resource curse’. Environmentally, it has been named one of the worst in the world. Yet, not all forest news out of Nigeria is bleak: the success of the Nigerian Montane Forest Project in one of the country’s remaining forests is one such beacon of hope, and one example of how the country could move forward.