A new mapping tool based on NASA satellite data confirms that the majority of fires that drove the recent haze over Sumatra and Malaysia were concentrated in deforested peatlands and scrub, rather than natural forest areas.

The interactive fire risk tool, developed by the Center for International Forestry Research (CIFOR), maps fire scars using high-resolution satellite imagery from NASA’s new Landsat 8 satellite. It also provides before and after pictures of areas affected by fires in Riau, where the bulk of hotspots were detected last month.

“The fires are burning in plantation forests where they may have been set purposely in rotation as a method of boosting crop production on oil palm plantations and timber plantations – a practice known as swidden – or slash-and-burn agriculture,” writes CIFOR’s Julie Mollins in a blog post. 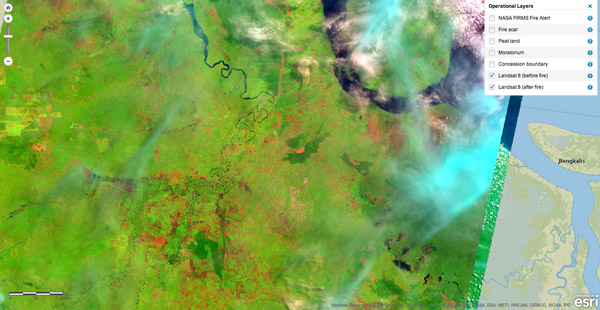 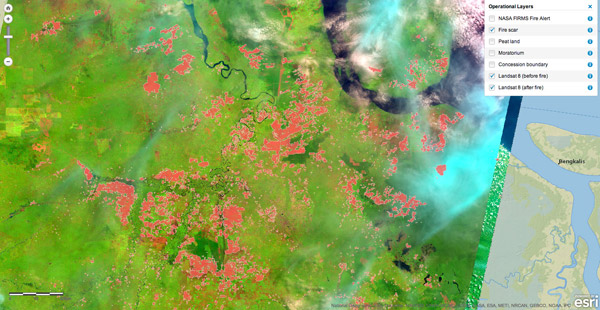 David Gaveau, a scientist at CIFOR, adds that the tool could help with investigation into the origin of the fires.

“A web-based application such as this one is useful because government officials and civil society can check the location, shape and size of the fire scars, whether the fires occurred in moratorium areas, concessions or in vegetation cover before-and-after-fire – crucial information for field investigations,” he said

The findings are consistent with reports from the World Resources Institute (WRI) and Eyes on the Forest, a Sumatra-based coalition of environmental groups. WRI data indicates that roughly half of hotspots recorded during the peak of the haze crisis were located in concessions belonging to palm oil and pulp and paper companies.

WRI looked at hotspot data from NASA over the past 12 years and found that while there have been an unusually high number of fire alerts this year and bigger factor in causing the headline haze over Singapore has been wind patterns that push smoke directly over the island city-state.

“While historic data shows that forest fires are not uncommon this time of year in Sumatra, there has been a dramatic increase in international attention around recent fires. Many forest fires typically go unnoticed by people and media outside the Sumatran provinces of Riau, Jambi, and North Sumatra,” explained WRI in a blog post two weeks ago. “This time, things are different—most likely because of current wind and air movement patterns which took the smoke to Singapore.”

“The wind patterns directed the smoke and haze from a large proportion of fires towards Singapore, a densely populated metropolis and a global financial and media hub. As a result, the haze from the fires instantly drew the international media’s attention.”